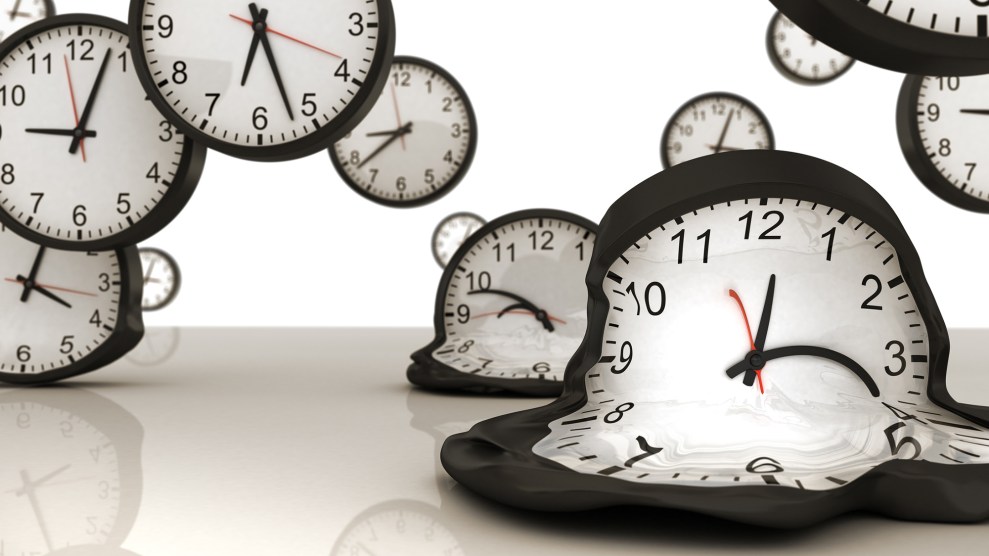 From the first moments of the Trump administration, many Americans began to feel that time had slowed down. This phenomenon had already been noticed during the seemingly interminable 597-day presidential campaign. But the past year has magnified this effect and provided sustained observations of a phenomenon that might be described as Trump-Induced Time Dilation: the 45th president’s ability to alter temporal perceptions; more specifically, his unnatural knack for making time slow to an excruciating crawl.

Just 17 days after inauguration day, John Oliver noted that the past weeks had felt “like 114 years.” A few days later, a writer for India’s Economic Times stated that “It has only been three weeks of Donald Trump as president but seems more like three years.” After 100 days, a USA Today reader issued a typical gripe: “One hundred days? Feels like 100 years.” Six months in, a guy on Twitter said “It feels like 10 years already.”

In late December, the New York Times quoted New York Attorney General Schneiderman’s lament that “it feels like this year has been a hundred years long.” (It also “feels like it shot by,” he added; suggesting further warping of space-time.) Just the other day, Greg Barker, the maker of a new documentary about ancient American history told the Toronto Star that it “feels like 10,000 years” since Trump took office.

There are scientific explanations for why people are experiencing Trump-Induced Time Dilation. Yet there is no agreement on just how much the president has inhibited the flow of normal time. A CNN.com commentator wrote that “100 days with Trump feels like two years with any other commander in chief.” Time seemed to be moving even more slowly to the Vulture.com writer who said the first two weeks of the new administration had felt like five years.

In Oliver’s perception, 17 Trump days seemed like 41,610 normal days, meaning that the president had made time unfold more than 2,400 times slower. In Barker’s view, 364 days of Trump was the equivalent of 3.65 million normal days, or more than 10,000 years.

For a sense of the magnitude of these effects, perhaps it’s best to think of in terms of planetary time. Imagine that everyone experiencing Trump-Induced Time Dilation is living on a planet in which the length of a year is dictated by Trump time. In this scenario, a year for Schneiderman’s planet lasts about 101 Earth years. In comparison, a year on Uranus lasts 84 Earth years. For the Twitter user mentioned above, a year in the orbit of a turbulent orange gas giant is the equivalent of 20 years on Earth. Jupiter, meanwhile, takes 12 years to circle the sun.

The most extreme effects of Trump-Induced Time Dilation appear to be on a scale that scrapes against the outer limits of science—and science fiction. For John Oliver, more than 2,400 Earth years unfold during a single Trump year. The closest analog may be the exoplanet Fomalhaut b, which, according to NASA, follows a 2,000-year “rogue orbit” around a distant star.

Greg Barker’s glacially slow Trump year recalls the watery planet of Interstellar, where the gravitational pull of a nearby black hole dilates time to the point where one hour on the planet elapses in the same time as seven Earth years. So far, no one has suggested that Trump can stretch time to such a fantastic extent. But if he does gain this ability, we have a long 183,960 years ahead of us.