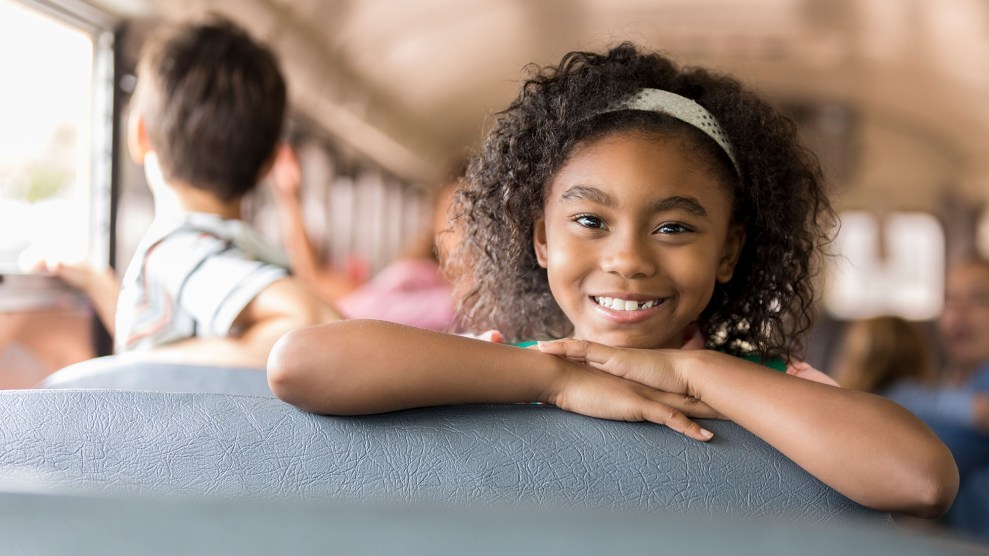 Beautiful African American elementary schoolgirl rides to school on a school bus. She is smiling at the camera.asiseeit/Getty

A federal appeals court panel blocked an attempt by officials in Gardendale, Alabama, to form its own school district, reaffirming Tuesday a previous ruling that the city’s school board “acted with a discriminatory purpose to exclude black children.”

Last April, US District Court Judge Madeline Haikala ruled that although majority-white Gardendale’s attempt to break away from majority-black Jefferson County was racially motivated, the new district could start to run two elementary schools and eventually purchase a high school from the county if, among other things, it created a court-approved desegregation plan within three years. Both the plaintiffs, represented by the NAACP Legal Defense and Educational Fund and a retired federal judge, and Gardendale appealed the ruling. But Circuit Judge William Pryor of the 11th Circuit Court of Appeals wrote in the panel’s opinion that Haikala erred not in her finding of racial motivation but instead in letting the secession continue.

The appeals panel found that the move would have impeded Jefferson County’s efforts to desegregate its schools. The county has been under federal oversight since a 1971 desegregation order. If the district had come up with a secession plan that didn’t impact those efforts, the court found, they could have created their own district, adding, “The desire for local autonomy must yield when a constitutional violation is found and remains unremedied.”

As the New York Times Magazine‘s Nikole Hannah-Jones explained in a piece about the case last September:

The town of Gardendale is 88 percent white, but its schools are now 25 percent black, in part because students bused in from North Smithfield, a working-class black community a few miles away, are zoned to schools located in Gardendale. Gardendale’s secession would not eliminate black students from their schools, but by ensuring only students who lived in Gardendale could attend in the new district, it would significantly decrease their numbers.

After lobbying by Focus, in 2013, Gardendale’s all-white City Council voted to create a separate school system. A few months later in November, a measure to implement a property tax to fund the new school system passed with 58 percent of the vote. The City Council then appointed an all-white school board and hired its own superintendent.

But there was just one thing: Jefferson County is one of a few hundred school systems in the country still bound by decades-old school desegregation court orders that came in the wake of the Supreme Court’s landmark 1954 Brown v. Board of Education decision. Gardendale could not leave the district without the approval of the federal court in Birmingham. That court had been friendly to towns trying to secede, and the new school board apparently considered the desegregation order so inconsequential that it did not inform its new superintendent that it existed.

Last year, the education nonprofit EdBuild found that there have been at least 71 attempts by communities like Gardendale to break away from school districts since 2000—46 of which have been successful. In Alabama, where state law permits a community of more than 5,000 people to create its own school district, nine districts had been created over the last decade and a half. In Jefferson County alone, seven communities had formed their own districts since 1959.