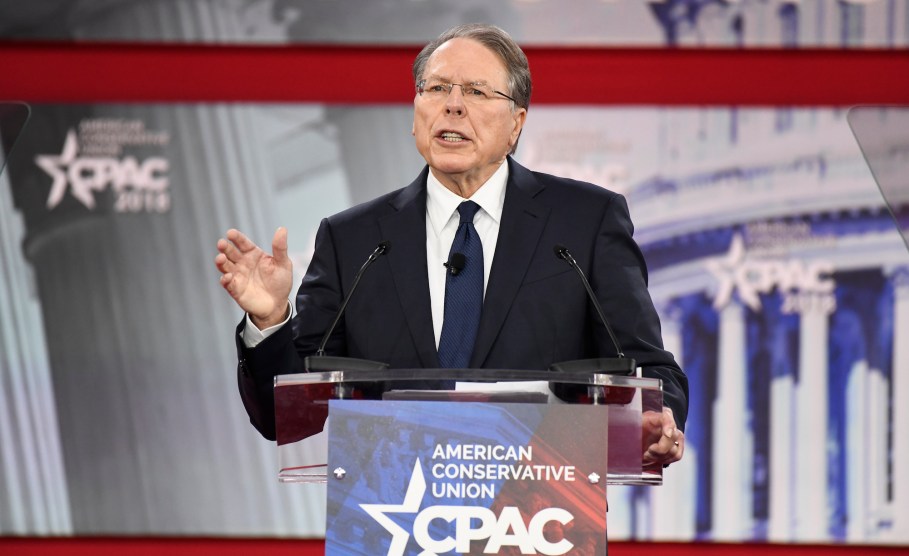 Companies are dumping their affiliations with the National Rifle Association. Celebrities are throwing millions of dollars at gun control efforts. But the February 14 school shooting in Parkland, Florida, is prompting an equal and opposite reaction in the Republican Party. In the aftermath of the bloodshed that claimed 17 lives, candidates in GOP primaries across the country have scrambled to declare their loyalty to their gun-owning base—sometimes adopting extreme positions to outflank their opponents.

After Delta Air Lines, Georgia’s largest private employer, declared it would cease to offer special flight deals to NRA members, state Republican lawmakers pulled their support for tax breaks for Delta that were speeding through the legislature. Lt. Gov. Casey Cagle, a Republican running for governor, lambasted corporations that cut ties with the NRA and said, “Corporations cannot attack conservatives and expect us not to fight back.”

His Republican primary opponent, Georgia Secretary of State Brian Kemp, upped the ante with a counterproposal: Instead of exempting Delta from taxes for jet fuel, the state should enact a sales tax holiday for guns and ammunition over the Fourth of July holiday. “Instead of giving millions of our hard-earned tax dollars to billion-dollar businesses that want to disarm law-abiding citizens,” Kemp said in a statement, “we should give a tax break to hardworking Georgians who want to protect their families and loved ones from criminal aliens, terrorists and gang members.”

In Ohio, the GOP gubernatorial primary has turned into an arms race for who can take hardest line in support of gun owners. Lt. Gov. Mary Taylor, a Republican who has consistently received an “A” rating from the NRA, used the Parkland shooting to distance herself from Gov. John Kasich, who angered gun groups in the tragedy’s aftermath when he implored President Donald Trump to enact “commonsense gun laws,” including a ban on bump stocks that make semi-automatic weapons work like automatic ones. “All too often in the aftermath of these tragic events, there is knee-jerk reaction to attack the Second Amendment rights of our citizens rather than to address the root causes, which often center around mental illness,” she said. Taylor attacked her Republican primary opponent, Attorney General Mike DeWine, reminding voters of his low NRA ratings and past support for gun control measures.

In response, a DeWine spokesman reminded voters that the candidate has supported arming school employees ever since the December 2012 shooting at a school in Sandy Hook, Connecticut. Both candidates have also boasted about their endorsements from major Ohio pro-gun groups.

In Indiana, the state with the highest rate of concealed weapon permits, two congressmen locked in one of the country’s nastiest Republican Senate primaries are doing all they can to remind voters of their support for gun rights. On Monday, Rep. Luke Messer reiterated his support of Second Amendment rights and tweeted that “gun bans are not the answer.” Not to be outdone, Rep. Todd Rokita released a TV ad showing him shooting a gun and boasting that he’s “pro-life, pro-gun, and pro-Trump,” with an “A” rating from the NRA.

Not all Republicans are staking out extreme positions in support of gun rights. Gov. Bill Haslam (R-Tenn.) warned his party members that in the aftermath of the Parkland shooting, a desire for greater gun control could cause some moderate voters to support Democrats in the November midterm elections, especially suburban women. But that warning has really only resonated with GOP lawmakers who aren’t facing tough primaries and are looking ahead to tight general elections, like Peter Roskam (R-Ill.), who distanced himself from the NRA, and Brian Mast (R-Fla.), who called for a federal assault rifle ban.

Gun owners are likelier to vote than people who don’t have guns, and those who oppose gun control are likelier to be single-issue voters than gun control proponents. These tendencies, coupled with the NRA’s voter mobilization machine, have long spurred Republican office seekers to make guns a centerpiece of their campaign platforms. The latest school shooting doesn’t seem to have changed that dynamic.