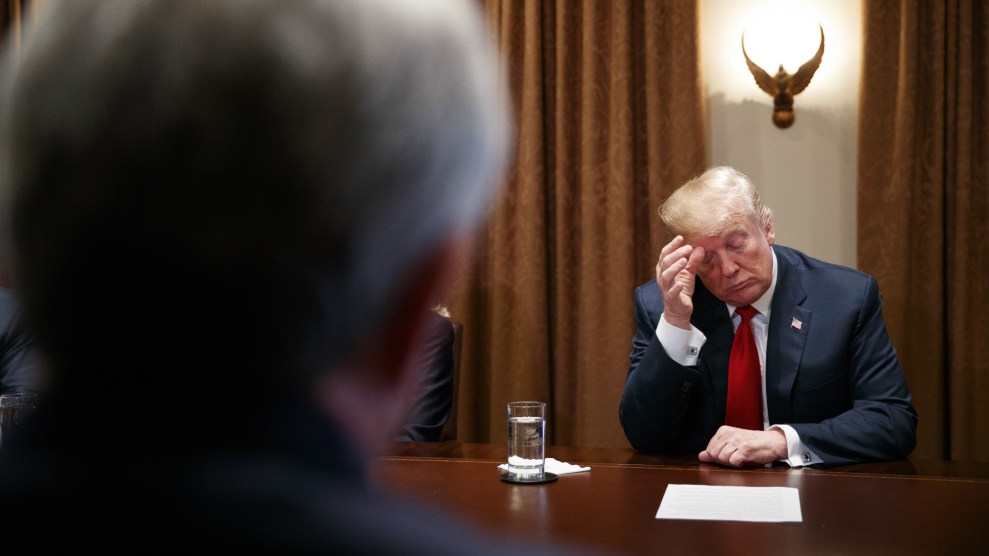 Just days after the infamous “Nunes Memo” was greeted with widespread ridicule, another GOP talking point took a major hit Tuesday. Democratic lawmakers revealed that a “whistleblower” who congressional Republicans once suggested would reveal damning evidence against Hillary Clinton had actually never even mentioned Clinton to the FBI.

At issue is the 2010 sale of a uranium company with extensive US holdings to a Russian firm. Republicans, including President Donald Trump, have charged that as secretary of State, Clinton authorized the deal in exchange for donations to the Clinton Foundation. The allegations are misleading for a number of reasons, but Republicans have nonetheless sought to use them as a counterweight to the Trump-Russia probe.

“The Department of Justice has now provided us with a detailed briefing that directly contradicts these Republican allegations.”

Democrats now say that senior Justice Department officials told House Oversight and Government Reform Committee staffers in a December 15 briefing that the whistleblower had offered no evidence about Clinton. The Justice Department officials also said during the briefing that they considered the whistleblower, who has been identified in media reports as William Campbell, too unreliable to use as a witness due to inconsistencies in his story, according to a letter sent Tuesday by Reps. Elijah Cummings (Md.) and Adam Schiff (Calif.)—the top Democrats on the House oversight committee and the House intelligence committee—to the Republican chairmen of those panels.

After hyping the Uranium One case throughout much of 2016 and 2017, Republicans have grown relatively quiet about the issue in recent weeks. Instead, they’ve sought to focus attention on the controversial memo written by staffers of House intelligence committee chairman Devin Nunes (R-Calif.), attacking the process through which FBI agents sought a warrant to surveil Carter Page, a Trump campaign aide suspected of acting as a Russian agent. Tuesday’s letter may help explain why Republicans have largely stopped talking about the Uranium One whistleblower after raising the matter repeatedly last fall.

“The Department of Justice has now provided us with a detailed briefing that directly contradicts these Republican allegations,” Cummings and Schiff wrote in their letter.

Campbell has played a complicated but important role in the GOP efforts to attack the Trump-Russia story. Since the 2016 election contest, Republicans have pressed claims that Clinton improperly OK’d the sale of Uranium One, a Canadian company with holdings in the United States, to a subsidiary of a Russian state-controlled uranium firm, after the Clinton Foundation received donations from people connected to the company. As I explained last year, the allegations, which first surfaced in a 2015 New York Times story, never made much sense:

The Uranium One sale was unanimously approved by [Committee on Foreign Investment in the United States, or CFIUS], which is made up of representatives from nine separate federal agencies and chaired by the Treasury Department. The State Department was just one of the member agencies. By all accounts, Clinton’s role was nominal. In practice, Jose Fernandez, then the assistant secretary of state for economic, energy and business affairs, represented the State Department on CFIUS. He told the Times that Clinton “never intervened with me” on any matter the panel considered. It’s not even clear if Fernandez briefed Clinton about the uranium deal. And [Frank] Giustra, the Clinton Foundation donor at the center of the Times story—who was responsible for $140 million of the $145 million in reported contributions—said he had sold his share of Uranium One three years before the Russian deal. Giustra said he never mentioned the deal to Clinton, whom he met at charity events.

In October, a story in a The Hill newspaper revived the issue by suggesting that a whistleblower—Campbell—had acted as an FBI informant when the bureau prosecuted Vadim Mikerin, an executive with a subsidiary of the same company that later bought Uranium One, for a scheme involving bribery and kickbacks related to trucking of Uranium. The article suggested the Justice Department failed to provide information about the prosecution to the State Department and other agencies that could have blocked the Uranium One sale.

Chuck Grassley (R-Iowa), the chairman of the Senate Judiciary Committee, went so far as to call for a special counsel to investigate the Uranium One case. House Republicans went even further, painting the whistleblower as key to exposing Clinton’s ties to Uranium One. Rep. Ron DeSantis (R-Fla.) told Fox News in October that Campbell could implicate Hillary Clinton in corruption.

“We have the money that went to Bill Clinton for the speech, the half a million dollars, millions of dollars to the foundation from sources connected with Uranium One,” DeSantis said. “And then you have the approval of the deal on the CFIUS board which Hillary Clinton was a member of in 2010. So, we do have the quid, we have the quo. This informant I believe would be able to link those two together, because he was right at the heart of a lot of what was going on at the time.”

But we now know that in a December 15, 2017, briefing to House oversight committee staff, Justice Department officials apparently knocked down this claim. The officials said that “at no point did [the individual] provide any allegation of corruption, illegality, or impropriety on Clinton, the Clinton Foundation, President Clinton, the Uranium One deal, or CFIUS,” Cummings and Schiff wrote. “They also confirmed that there were ‘no allegations of impropriety or illegality’ regarding Secretary Clinton in any of the documents they reviewed.”

The officials also revealed in the briefing that “career attorneys initially planned to build their case against Mikerin based on evidence provided by this individual.  However, they began to have ‘serious credibility concerns’ because of ‘inconsistencies’ between the individual’s statements and documents they obtained as part of the investigation,” the letter says.

The letter says that House oversight committee chairman Trey Gowdy, after months of unexplained delay, has scheduled an interview with Campbell this week. The Democrats asked in their letter that the interview be transcribed. Asked for comment on the Democratic letter, Gowdy’s staff provided a letter he had written in response. “Rather than jumping to conclusions based on third party accounts about what the witness might offer,” wrote Gowdy, “I will reserve judgment until we hear directly from him tomorrow.”

Campbell’s lawyer, Victoria Toensing, did not respond to a request for comment.