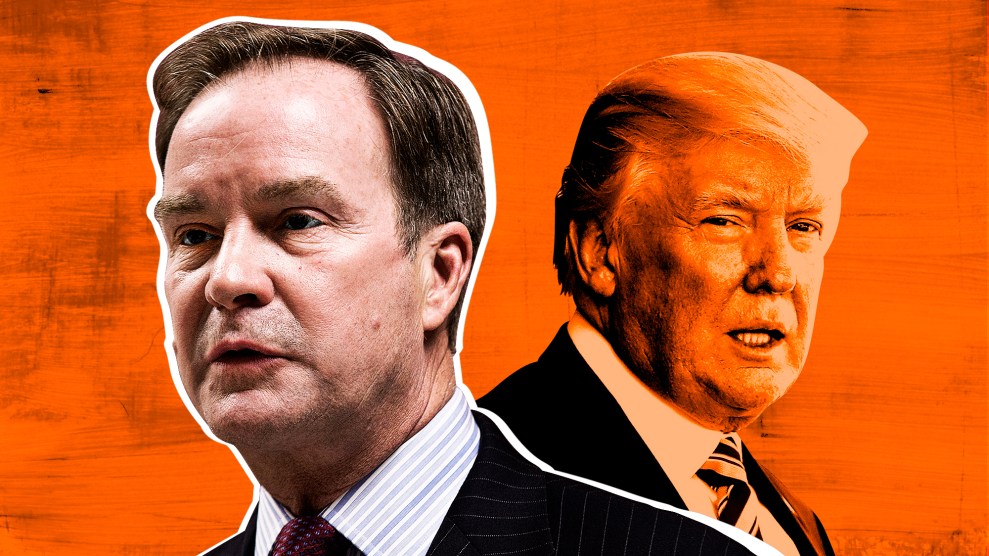 Two years ago, at the height of the Flint water crisis, residents of this impoverished, majority-black city were demanding accountability. Thousands of children had been exposed to dangerous levels of lead, and activists placed the blame squarely on the shoulders of Republican Gov. Rick Snyder and his administration. There were calls for Snyder’s resignation, for a federal investigation, and for criminal prosecutions.

Snyder never resigned, but in the months that followed, multiple members of his administration were criminally charged for their roles in the disaster. Now, the man who filed those charges—Michigan Attorney General Bill Schuette—is campaigning to replace Snyder as the state’s chief executive. Schuette isn’t the type of politician many people would think of as a crusader for environmental rights. He’s a conservative Republican and vocal ally of President Donald Trump. And he’s locked in a high-profile GOP primary fight with a member of the same administration that he’s been battling in court.

“This is…about sending a message that there is one system of justice.”

The water crisis had its roots in Snyder’s controversial appointment of Darnell Earley as Flint’s emergency manager in 2013. The position, which had been created by the legislature two years earlier, was intended to “fix” the financial problems plaguing cities around Michigan. The legislation was viewed by many as deeply undemocratic, because it took power away from elected local officials and gave it to the state-appointed managers. In April 2014, Earley exercised that power when he oversaw the decision to switch Flint’s water source from Lake Huron to the Flint River, with the goal of cutting costs.

Residents quickly noticed a difference. Because many homes in Flint had lead plumbing, the improperly treated river water leached lead off the pipes and into taps across the city. People reported rashes, hair loss, and discolored water, but Michigan officials, including Snyder, insisted the water was safe to drink. In 2015, scientists from Virginia Tech ran tests and found that the water had significant levels of lead. A doctor in Flint reported that she was seeing worryingly high lead levels in local children. The Snyder administration responded by lashing out at the experts; an official who worked in Michigan’s Department of Environmental Quality disputed the Virginia Tech findings and called the scientists “lead magicians.”

But the scientists were right, and the impact was devastating. Lead poisoning, especially in children, can cause developmental disabilities. Scientists believe the toxic water was linked to an outbreak of Legionnaires’ disease that has killed at least 12 people since 2014. A 2017 West Virginia University and Kansas University study also found that the poisoned water caused an increase in fetal deaths and miscarriages.

On January 15, 2016, nearly two years after the crisis began, Schuette announced he was launching an investigation. Over the next few months, he filed charges against several state and city employees for alleged crimes, including tampering with evidence and failing to notify residents of the Legionnaires’ outbreak. Several months later, he charged Earley and Gerald Ambrose, who succeeded Earley as emergency manager, with multiple felonies, including false pretenses, conspiracy to commit false pretenses, misconduct in office, and willful neglect.

Then, in 2017, Schuette filed involuntary manslaughter charges against six officials, including Earley and Nick Lyon, the head of Snyder’s Health and Human Services Department. Those charges were related to the 2015 death of an elderly man with Legionnaires’ disease. In all, Schuette has charged 15 state and local officials in connection with his Flint investigation.

A former member of Congress, state senator, and judge, Schuette was elected attorney general in 2010 and reelected in 2014. During those campaigns, he shied away from tying himself too closely to divisive issues. “His ads in the past were not particularly partisan,” says Matt Grossmann, the director of Michigan State’s Institute for Public Policy and Social Research. Instead, Schuette promised to crack down on corruption and sex trafficking.

Once in the attorney general’s office, however, Schuette used his position to weigh in on national politics, frequently joining fellow Republicans in filing lawsuits against Obama administration policies on everything from contraception to climate change. “He’s been part of the national group of [attorneys general] who sued Obama for everything they could think of,” Grossmann says. Schuette is also no fan of marijuana, believes the gay marriage battle in Michigan was really about states’ rights, and opposes affirmative action. Still, Schuette has managed to build something of an “independent candidate reputation,” according to Grossmann.

Despite sharing a political party with the outgoing governor, Schuette is, in many ways, campaigning against Snyder’s legacy. Snyder is the country’s 4th most unpopular governor, according polling from Morning Consult, and he’s been widely criticized for his handling of the Flint crisis. Schuette, on the other hand, wants to be seen as the man who held government officials accountable for their roles in the disaster.

“This is all about providing justice for families of Flint,” Schuette said of the investigation at a media roundtable in December. “It’s also about sending a message that there is one system of justice. It doesn’t matter who you are, if laws have been violated my job…was to enforce the law.”

The investigation has led to an increasingly tense relationship with Snyder. A particular point of contention has been Schuette’s prosecution of Lyon, a Snyder appointee who is the highest-ranking official to be charged in relation to the water crisis. Calley has accused Schuette of using the high-profile charges to exploit the Flint tragedy. “I don’t see how there can be any shadow of doubt that the process that [Schuette] has carried out has been highly politicized,” Calley said in November, according to the Detroit Free Press.

That’s a concern that has been echoed by some Flint residents, as well. “It’s political grandstanding,” says Nayyirah Shariff, a longtime activist with the Flint Democracy Defense League. She argues that the attorney general didn’t act until national media attention forced him to get involved.

Schuette’s campaign bristles at those allegations, pointing out that he’s worked closely with Genesee county prosecutor David Leyton, a Democrat, on the Flint cases. “These two public servants are working together to find justice for a city that was wronged,” said Schuette spokesman John Sellek in an email to Mother Jones. “They will not stop just because Brian Calley, who is part of the administration that made these decisions and now wants to be governor himself, is willing to attack our justice system to further his personal ambition.”

While Snyder has yet to make a formal endorsement, he’s reportedly been talking up Calley behind the scenes. Schuette, meanwhile, has the backing of an even more prominent Republican—Donald Trump. The president announced his support for Schuette a few days after the attorney general entered the race. “I am bringing back your jobs and Bill will help,” declared Trump.

Attorney General Bill Schuette will be a fantastic Governor for the great State of Michigan. I am bringing back your jobs and Bill will help

Schuette’s alliance with Trump dates back to the 2016 election. The attorney general didn’t endorse Trump in the primary but offered his support once Trump became the GOP nominee. The relationship may have been cemented a month before the election, after the Washington Post released a video of Trump bragging about sexually assaulting women. Calley quickly distanced himself from Trump and called on him to drop out of the race. Schuette criticized Trump’s comments, too, but he refused to withdraw his endorsement. “Schuette was setting himself up as the person who was more on board,” Grossmann says. “And that was rewarded with President Trump’s endorsement.” After Calley entered the gubernatorial race last year, an independent political action committee supporting Schuette launched a website blasting Calley for “abandoning Donald Trump.”

If Schuette manages to win the August 7 primary, he’ll face a tough battle in the general election. A January Glengariff Group poll put Gretchen Whitmer, the leading Democratic candidate, ahead of Schuette by 7 percentage points. The crisis in Flint is sure to come up in the race. The city’s water is now safe to drink according to the Michigan Department of Environmental Quality, but distrust still runs high in the community. “In many ways we’re forgotten,” Shariff explains. “We are still using bottled water to meet daily needs.”

Whitmer, who has said the issue is what motivated her to run for governor, has laid the blame on Snyder’s administration. “For too long, our leaders have failed us,” she said when she announced her candidacy early last year. “You don’t have to look beyond the Flint water crisis for proof of a fundamental failure of government.”