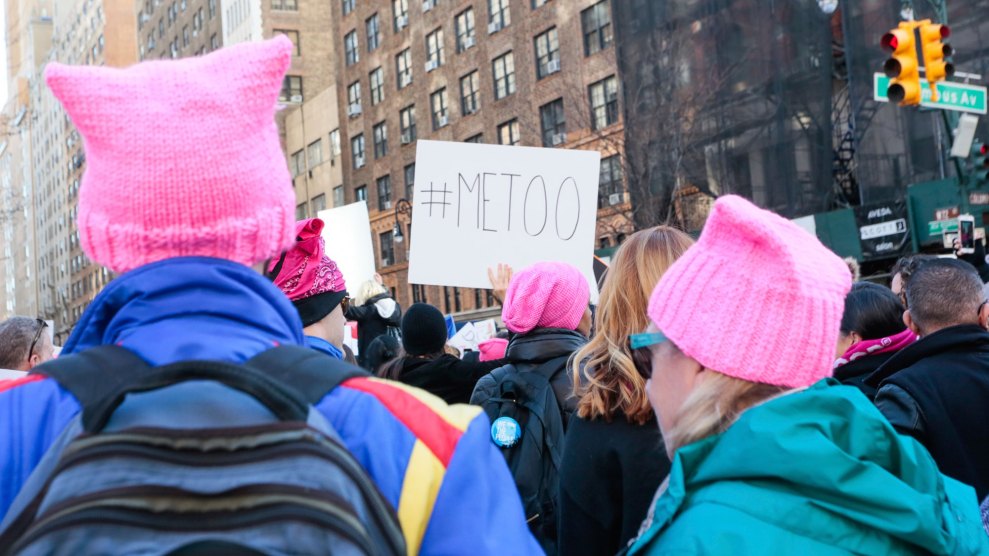 On Monday, Minnesota voters will go to the polls for the 16th and 17th special elections of 2018. One district is suburban and leans Democratic; the other is rural and heavily Republican. But both races have one big thing in common: They were triggered by male lawmakers stepping down after allegations of sexual misconduct.

Over the past seven months, at least 14 state and national lawmakers have resigned or announced they will soon retire in the wake of sexual misconduct scandals that are roiling legislatures from California to Maine to Washington, DC. The result is a frenzy of special elections—and a mini-wave of women running to fill those seats. Of the eight impending special elections to replace disgraced male state legislators, Democrats are fielding women candidates in seven of them. (The lone exception: next week’s state house race in Mississippi, where all four candidates in the non-partisan primary are men.)

In Minnesota, Democrat Karla Bigham, a former state representative, is vying to fill the state Senate seat vacated by Dan Schoen, a Democrat who resigned in November. Schoen had been the target of a string of harassment accusations, included sending an unsolicited dick-pic to a senate staffer. (His attorney has said that “everything is taken out of context” and that the photo was sent by accident.) That election could have ramifications for the balance of power in the state—with Schoen’s departure, Republicans currently hold a two-vote majority in the upper chamber.

On the House side, Melissa Wagner, a Democratic social worker, is an underdog in the race to replace former Republican state Rep. Tony Cornish, who announced his resignation the same day as Schoen after the Minneapolis Star Tribune reported he had repeatedly propositioned a lobbyist and harassed a female colleague, among other transgressions during his eight terms in office. (Cornish apologized but denied any wrongdoing.)

On Tuesday, voters in the Oklahoma Panhandle will pick a replacement for former Republican state Sen. Bryce Marlatt, who resigned after being charged with sexual battery for allegedly groping an Uber driver. The Democratic nominee is Amber Jensen, an Army veteran who works with disabled kids. She faces GOP state Rep. Casey Murdock in one of the reddest parts of the country.

One week after that, Kentucky voters will fill the seat vacated by former Republican state Rep. Dan Johnson, who committed suicide in December after being accused of molesting a 17-year-old girl (an allegation he denied). The Democratic nominee, Linda Belcher, formerly represented the district. The Republican is Johnson’s widow, Rebecca Johnson.

No one has made made the issue of sexual misconduct as central to their campaign as Lori Berman, a Democratic state representative from Florida who is running for state Senate. Berman is hoping to replace former state Sen. Jeff Clemens, the onetime incoming Democratic leader, who resigned in October after Politico reported he’d had an affair with a lobbyist.

In response to the Clemens scandal, the Republican state Senate leader issued a new set of sexual harassment guidelines that called for complaints to be directed to his office. Berman took issue with that directive, accusing the GOP leadership of seeking to silence “victims by forcing them to confide in the same people who have the power to terminate their employment, and who many times have political allegiances to the members being accused of harassment.” It was “shameful,” she said in a campaign email last November. In her campaign kickoff, she argued that Tallahassee needed more women lawmakers “now more than ever.” (Her opponent, Tami Donnally, the executive director of a church ministry, is one of the few Republican women running to replace a disgraced male lawmaker.)

Special elections are, as a rule, a small sample sizes, and they are often a bit flukey. But these races do fit into a larger trend—the last 14 months have had a transformative effect on the role of women in progressive politics. The rise of Resistance groups such as Indivisible has been largely fueled by women. A dominant theme of the record-setting Women’s Marches was President Donald Trump’s own videotaped comments, in which he boasted about committing sexual assault.

EMILY’s List, the incubator for pro-choice women candidates, has seen a 26-fold increase in the number of women looking to run for office. And it’s been women staffers and lawmakers who have kept the #MeToo movement burning in state capitols and in Washington. (It was Democratic women such as Sen. Kirsten Gillibrand of New York who ultimately forced Minnesota Sen. Al Franken to resign.) Former Trump aide Steve Bannon told Bloomberg recently he’s believes a women-led political backlash is “going to unfold like the Tea Party, only bigger.” Come November, it might just be the story of the midterms. But we may not have to wait that long to feel the effects.