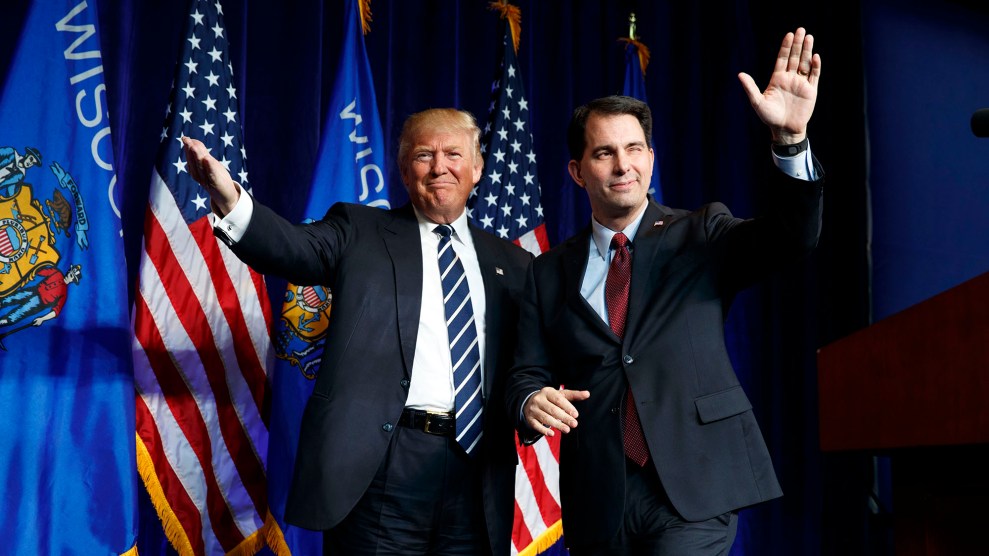 In January, Democrat Patty Schachtner won a shocking upset, winning a special election for a Wisconsin state Senate seat by 11 points. The district had been in Republican hands since 2000 and was carried by Donald Trump by 17 points in 2016.

There are currently two more vacancies in Wisconsin’s state Legislature, created after a Republican state senator and representative both left to take jobs in Gov. Scott Walker’s administration in December. But Walker has so far refused to schedule special elections to fill those seats, claiming that balloting would be a waste of money, since the Legislature is set to adjourn in May. Instead, the governor announced plans to pick the district’s new legislators during November 2018’s general election and seat them in January 2019.

Democrats competing in special elections this year have over-performed expectations.

On Monday afternoon, a Democratic group led by former Attorney General Eric Holder sued Walker in a Wisconsin court on behalf of voters in the two vacant districts, arguing the governor’s decision would deny them representation for over a year. The motion cites the Wisconsin Constitution’s language saying legislative vacancies “shall be filled as promptly as possible by special election.” The complaint alleges “Governor Walker has repeatedly publicly stated that he will not do so,” and seeks to force earlier elections.

The lawsuit is part of a broader battle over voting rights in the state. As Mother Jones has reported, Wisconsin’s voter ID law blocked thousands of eligible voters from the polls in 2016. From my story in October 2017:

After the election, registered voters in Milwaukee County and Madison’s Dane County were surveyed about why they didn’t cast a ballot. Eleven percent cited the voter ID law and said they didn’t have an acceptable ID; of those, more than half said the law was the “main reason” they didn’t vote. According to the study’s author, University of Wisconsin-Madison political scientist Kenneth Mayer, that finding implies that between 12,000 and 23,000 registered voters in Madison and Milwaukee—and as many as 45,000 statewide—were deterred from voting by the ID law. “We have hard evidence there were tens of thousands of people who were unable to vote because of the voter ID law,” he says.

In the legislative session this year, Republicans voted to oust the heads of the state’s ethics and elections commissions, who helped lead an investigation into Walker’s fundraising from corporate interests. The executive director of Common Cause Wisconsin told HuffPost it was “one of the most grotesque abuses of power that has occurred in Wisconsin in its history.”