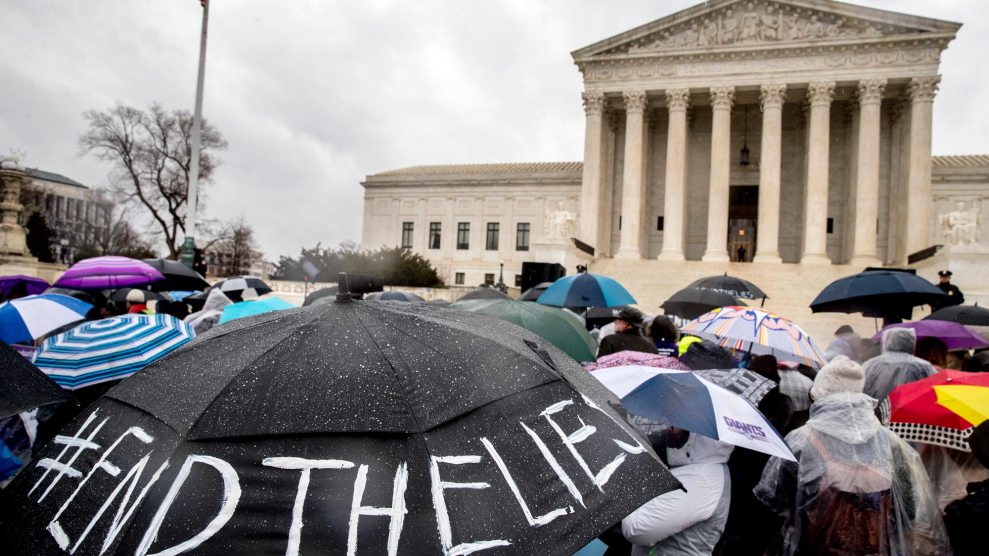 With anti-abortion and pro-choice demonstrators rallying outside, the Supreme Court heard National Institute of Family and Life Advocates (NIFLA) v. Becerra on Tuesday morning, the blockbuster case that could shift the law of the land on free speech and abortion rights. During oral arguments, justices wrestled with the double edged sword embedded in the case: a ruling favoring anti-abortion plaintiffs could lay the legal foundation for future pro-choice victories.

The first major abortion-related case to come before the court since President Trump appointed Justice Neil Gorsuch, NIFLA centers on a 2015 California law, known as the Reproductive FACT Act, requiring medical clinics to disclose if they are unlicensed. The law also mandates some licensed and unlicensed medical clinics post notices informing women about state programs that help pay for family planning services—including contraception, prenatal care, and abortion—in their waiting rooms.

The FACT Act has been trumpeted by pro-choice groups as a check on misleading tactics at crisis pregnancy centers, which often mask anti-abortion ideologies behind offers of family planning counseling and medical care. But the case more broadly hinges on the state’s right to regulate health providers’ so-called “professional speech,” or the information they provide people who come seeking care.

Over the past decade, pro-choice groups have themselves wrestled with laws governing compelled professional speech, requiring, for example, that abortion providers read patients scripts dotted with widely–discredited information about the procedure. If the Supreme Court decides crisis pregnancy centers can’t be forced to give out particular information about abortion, it could give abortion providers a new tool to fight laws that force them to speak about abortion in a particular way.

The case began in 2016, when a group of 110 crisis pregnancy centers (CPCs), represented by NIFLA, sued California arguing the signs violated of their First Amendment rights of free speech and religion. They alleged the signs amounted to a requirement to defy their faith in order to advertise abortions.

A federal appeals court disagreed. The 9th Circuit ruled that the state’s right to regulate “professional speech” protected the signs, finding that the state had more latitude to regulate professional speech than it might other kinds of speech. That court found the government has a compelling interest in the health of its citizens, and in their ability to get accurate information about medical services protected by law, including abortion. California, the court noted, has more than 700,000 pregnancies per year, half of which are unintended.

Justice Samuel Alito argued that if the court’s ruling formalized a category of professional speech it could “have far reaching consequences,” beyond medicine. He mentioned a number of other professions that could suddenly be subject to such standards—from journalists to economists, fortunetellers, and climate scientists.

Federal courts have been wildly inconsistent about states’ rights to regulate professional medical speech. The 3rd circuit, for instance, has upheld a law banning gay conversion therapy, but the 11th circuit struck down a Florida law prohibiting doctors from asking patients about gun ownership.

The Supreme Court’s decision in NIFLA could establish a national standard for courts facing similar cases. If the high court sides with the crisis pregnancy centers and throws out California’s required signs, it could endanger laws, enacted in eighteen states, that have required abortion providers to read scripts claiming a pre-viable fetus will feel pain, that abortion can lead to mental illness, or that there is a causal link between abortion and breast cancer.

“When the court is looking at whether the state can make crisis pregnancy center doctors say certain things, the flip side of that issue is can the state make doctors who provide abortions say certain things,” Andrew Beck, a senior staff attorney with the ACLU’s reproductive freedom project, told Mother Jones last year.

Arguing on behalf of NIFLA on Tuesday, attorney Michael Farris focused on the California law’s apparent targeting of anti-abortion clinics. Under the FACT Act, it is mostly nonprofit clinics that are required to post the required signs. (The law exempts clinics that actually provide the subsidized medical services referred to on the signs.) The result, Farris contended, is a law “gerrymandered” to disproportionately target the speech of anti-abortion clinics, rather than all medical clinics.

Justices Ginsburg and Sotomayor seemed skeptical. Ginsburg asked Farris what he would say to a hypothetical law that simply required clinics to hang a sign saying only that they provide neither abortion nor contraception. “Would that be constitutional?” she asked.

Farris said it would not be if it targeted particular clinic types because of their position on abortion. Sotomayor noted that the clinics in question in the case are in the business of giving pregnancy advice, but that their presentation can be misleading or incomplete. “I looked at a few of their websites” she said, saying that she felt they looked like official medical clinic sites, citing one that boasted of following HIPAA privacy rules and depicted a nurse in front of an ultrasound machine.

These clinics, she said, give pregnancy advice without a license. Sotomayor noted that there are state laws requiring immigration counselors without a legal license to disclose as much. Would such laws be unconstitutional? Farris replied that they would not be.

When Joshua Klein, California’s deputy solicitor general, stepped up to argue on behalf of the state, Justices Kagan and Alito, who tend to rule on opposite sides in abortion cases, both asked him to explain how the law was created, and whether its was written to target anti-abortion groups. Kagan echoed Farris’s language about the law being “gerrymandered,” while Alito noted the majority of the clinics covered by the law are pro-life, asking Klein if it might represent “intentional discrimination.”

Klein assured the justices that the law was written to inform women seeking pregnancy care about financial assistance for a wide range of services, including prenatal visits and other procedures to promote healthy pregnancies. The notices, Klein said, aim to empower women by informing them their financial circumstances do not determine her access to care. The signs are not required of all doctors, Klein explained, because most providers treat people who already have means to pay for their care, whether through private insurance or programs like Medicaid. Hence the focus on free clinics.

At the end of oral arguments, NIFLA lawyer Farris argued that the case could have unintended consequences for pro-choice organizations. “A pro-life state is going to find out there is no difference any more between people who perform abortions and those who counsel about it,” Farris said, warning they could seize the opportunity to require people referring women to abortion services to provide pro-life information. That, he said would be a “step in the wrong direction” of politicizing the practice of medicine.

That argument, though, seemed unlikely to convince Justice Breyer, who returned to the parallels between the speech pro-life states so often require of abortion providers, and the signage rules California has imposed on crisis pregnancy centers.  “If the law is permissible which says, ‘Doctor, you must tell the woman about adoption,'” Breyer said, “then why shouldn’t the law say, ‘Family planning center, you must tell the woman about abortion?’ Sounds even-handed. Sounds as if everybody in the same business is under the same rules.”