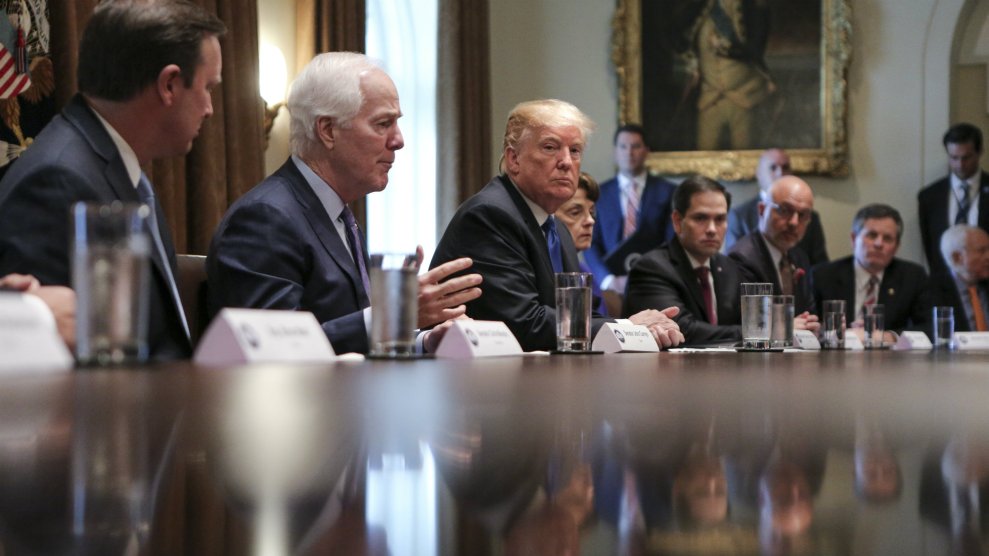 On Wednesday, Sens. Jeff Flake (R-Ariz.) and Dianne Feinstein (D-Calif.) introduced a new bill that would raise the minimum age required to buy an assault weapon from 18 to 21. The bipartisan legislation came on the heels of a meeting on gun safety at the White House between President Donald Trump and members of Congress from both sides of the aisle. During the meeting Trump appeared eager to embrace a number of gun control measures.

In the statement announcing the legislation, Feinstein referred to the ability of 18 year olds to purchase assault weapons as “dangerous” and making “absolutely no sense.” She added, “While we need to do much more to reform our gun laws, ensuring teenagers can’t legally buy weapons of war is a commonsense step forward.”

Because of a quirk in federal law, an individual has to be 21 to buy a handgun, but rifles and other long guns are readily available to 18-year-olds. According to Slate, the Gun Control Act of 1968, which raised the age to purchase handguns to 21, focused on handguns because those were routinely used in crimes and assault rifles were not yet widely available. But now that they are, they’ve been used in several mass shootings. The Parkland shooter, Nikolas Cruz, is 19 and legally obtained an AR-15 to slaughter 17 of his former classmates and teacher.

“This bipartisan fix is long overdue, and would’ve made as much sense before the tragedy in Parkland as it does after,” Flake said in the statement. “I hope we can work together to get this passed and signed into law without delay.”

But “working together,” passing a new measure, and receiving a presidential signature to make it law may not be as seamless as Sen. Flake hopes. At Wednesday’s meeting, Trump appeared to be open to a whole range of gun control measures including the idea of raising the age for the purchase of assault weapons, an idea he first floated last week. But on Thursday, he tweeted that some “not so good ideas” had come out of the gathering and mentioned no support for the age change.

Many ideas, some good & some not so good, emerged from our bipartisan meeting on school safety yesterday at the White House. Background Checks a big part of conversation. Gun free zones are proven targets of killers. After many years, a Bill should emerge. Respect 2nd Amendment!

While it’s becoming less clear what Trump does support, the National Rifle Association is staunchly against raising the age. “Legislative proposals that prevent law-abiding adults aged 18-20 years old from acquiring rifles and shotguns effectively prohibits them for purchasing any firearm, thus depriving them of their constitutional right to self-protection,” Jennifer Baker, the NRA’s public affairs director said in a statement last week after Trump first proposed the idea. In fact, the NRA wants to make handguns available to teenagers as well. In 2013, the NRA petitioned the US Supreme Court to lower the legal handgun purchase age to 18, arguing that the restriction denies older teens and young adults their Second Amendment right.

Feinstein counters that those same young adults the NRA wants to arm cannot legally drink alcohol, and gun laws should reflect that. “If you can’t buy a beer, you shouldn’t be able to buy a weapon of war,” she said. Raising the age could deter young shooters, but these weapons would continue to be accessible to adults. Devin Kelley was 26 years old when he used a semiautomatic rifle to kill 26 people at a church in Sutherland Springs, Texas, last November.