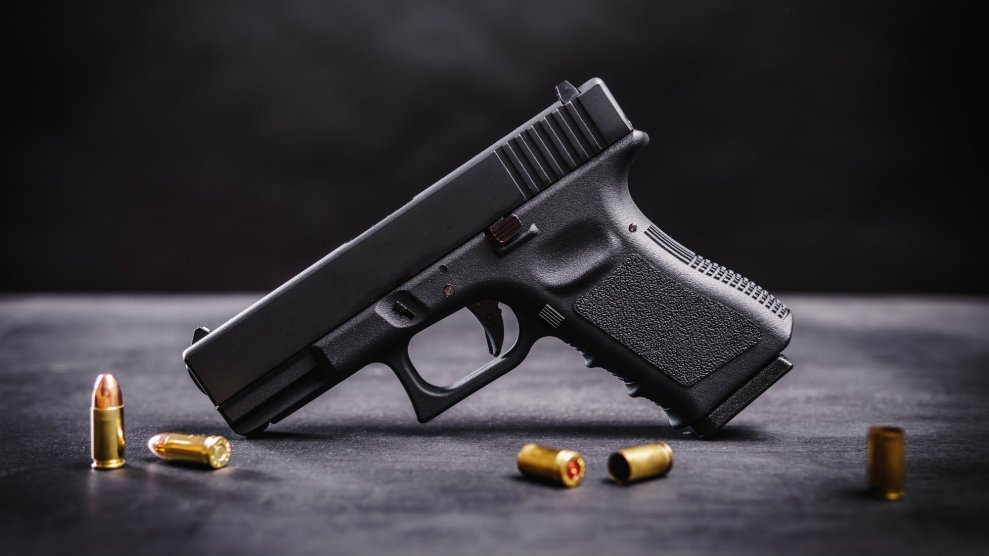 For more than two decades, the government has repressed research on gun violence. Now, Congress has declared that a law often credited with halting the study of gun violence does not actually block federal research. On Friday, President Trump signed a spending bill to fund the entire federal government, which includes a provision clarifying that the Centers for Disease Control and Prevention can, in fact, study the causes of gun violence. It is a step toward federal gun violence research, though critics call the move inconsequential without funding.

The freeze traces back to a provision in a 1996 spending bill that prevented government funds from being used to “advocate or promote gun control.” It’s known as the Dickey Amendment after its sponsor, former Rep. Jay Dickey (R-Ark), and Congress has renewed the rule annually. Dozens of Democrats—in the House and the Senate—have called to repeal the amendment after the February mass shooting in Parkland, Florida.

Republicans maintain the Dickey Amendment never forbade gun research, and only prohibited advocacy. Researchers say the chilling effect came from the message behind the amendment—and shutting off funding. In the 1996 bill, Congress took away the $2.6 million that the CDC had earmarked for studying gun violence. Between 1996 and 2012, CDC funding to research gun violence fell by 96 percent, according to the gun-control advocacy group Everytown for Gun Safety.

The current spending bill does not repeal the amendment. Rather, an accompanying report states that the CDC is not barred from conducting research on the causes of gun violence. But the spending bill offers no funds for new gun violence research. “When I actually see dollars appropriated, I’ll see a reason for celebration,” Daniel Webster, a professor of American health at Johns Hopkins University, says.

In the ’90s, the National Rifle Association spearheaded the push behind the Dickey Amendment after CDC researchers published gun violence research—such as a landmark study that showed having a gun at home put its occupants at greater risk. The gun rights group says its stance, then and now, is that “tax dollars should not be used to take sides in a policy debate.” The NRA’s advocates focused on statements like those from the director of the CDC’s National Center for Injury Prevention and Control, Dr. Mark Rosenberg. “We need to revolutionize the way we look at guns, like what we did with cigarettes,” Rosenberg said in 1994. “It used to be that smoking was a glamour symbol, cool, sexy, macho. Now it is dirty, deadly, and banned.”

“We said let’s start research on guns, maybe we can save as many lives.”

Dickey passed away in April 2017. In the years before his death, he regretted that his namesake amendment prevented gun violence research.  “It wasn’t necessary that all research stop,” he told NPR. “It just couldn’t be the collection of data so that they can advocate gun control. That’s all we were talking about.” Dickey and Rosenberg even formed an unlikely partnership to promote gun research funding.

Mother Jones spoke with Rosenberg about the history of the Dickey Amendment and the future of gun violence research at the CDC.

Mother Jones: What research were you directing at the CDC’s National Center for Injury Prevention and Control before the Dickey Amendment?

Mark Rosenberg: We were studying injuries. They had not historically been part of the traditional public health portfolio. We started the violence epidemiology branch.

In the injury center we looked at these two big leading causes of injury and death, cars and guns. And we saw that for cars, Congress was appropriating more than $200 million a year. And for gun research, Congress was appropriating almost nothing. We said let’s start research on guns, maybe we can save as many lives. We took a small amount out of our budget to study gun violence, about $2.6 million.

For every type of violence we can ask the same set of questions. We would start by asking, what is the problem? We would say, who is getting killed with guns, where did it happen, under what circumstances. Then we ask what are the causes? What is the role of mental illness, what is the role of drugs, what is the role of gangs and robbery, what is the role of easy access to weapons. The third question is, what works to prevent it? The only way you can tell if something works or not is by testing it out. The fourth question we needed to ask was once you find interventions that work, how do you scale them up? How do you translate them so they become part of policy and law?

MJ: When did the NRA become involved?

MR: The attacks started early, in the ’80s, and then increased when we published an article in 1993.  That research showed that having a gun in your home, not only did it not protect you, as the NRA said it would, but it put your family at much, much greater risk. It increased the risk that someone in your family would die in a gun homicide by three times. The risk of suicide by gun went up 400 percent. These were huge, huge increases in risk that a gun in your home put you up against. The NRA did not want to hear this.

MJ: How did the debate escalate?

“The NRA did not want to hear this.”

In 1996, there was a big hearing on CDC’s appropriation. We basically got ambushed by the NRA. They chose Jay Dickey to be their lead in this effort. He was a congressman from a rural state, Arkansas. He was a lifelong NRA member. In Congress there was a big fight, between people who wanted to support this research and people who wanted to support the NRA, and not only stop this research but destroy the whole injury center. The Dickey Amendment came up as a compromise.

MJ: The language of the Dickey Amendment doesn’t explicitly prevent gun violence research. How has it had a chilling effect?

What the Dickey Amendment said was none of the money that goes to the CDC should be used to promote or advocate gun control. It didn’t say you couldn’t do research. But it was really a threat, it was a shot across the bow. It said if you do this sort of research, we can make your life miserable.

At the same time, they also took away $2.6 million, which is what we had been spending on gun violence prevention research. But they didn’t say you couldn’t do the research, and CDC continued to do it as best we could with a really limited financial budget. We tried to continue to do the public health approach to ask and answer the questions that we could. Until the CDC got a new director. This new director thought it was more important to protect his own job than to protect the science. That was a sad day for CDC. After he came, he fired me. I was the person most identified with gun violence research. I became a target for the NRA.

MJ: Is the new bill going to open the door to federal gun research? What about funding?

This is a big first step, this basically clears the path and it’s Congress saying this is the path we want to go down. That’s huge. Most people don’t understand how you can research [gun violence]. What does that have to do with gun violence? Isn’t it just a question of arming all the teachers? Isn’t it just a question of hardening the targets, letting more people carry concealed weapons, so that there’s always a good guy with a gun to stop a bad guy with a gun?

I think this says that research has a lot to do with this. We need to answer these basic questions, and we owe it to legislators to give them the data about what’s safe and effective, before we ask them to vote.

It is a big step in the right direction. It is recognition of the power of science to contribute to this argument. Next is the funding. But one step at a time.