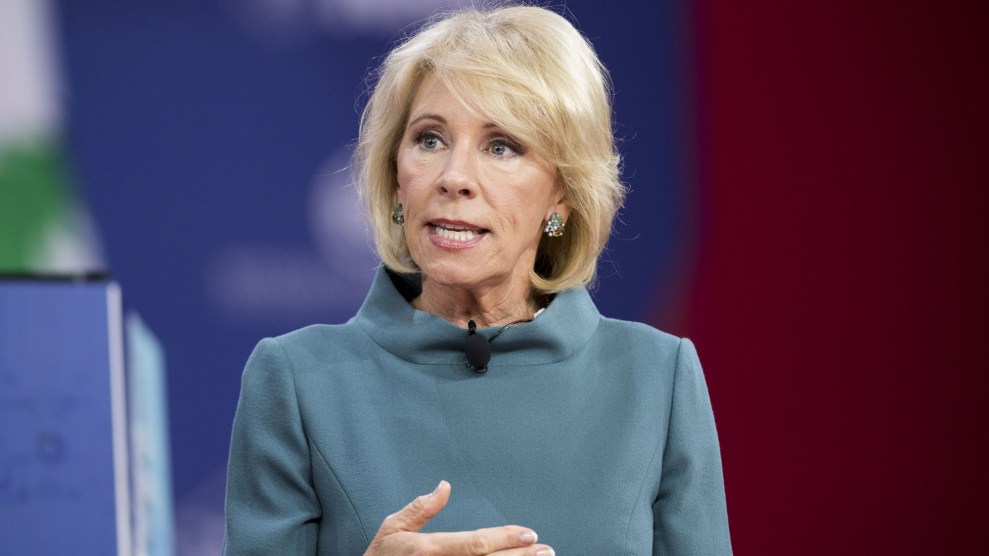 In her first year overseeing the Education Department, Secretary Betsy DeVos has been “a boon for for-profit colleges, student loan companies, and advocates of school privatization,” while harming public school students of all ages, according to a report released Thursday by two Massachusetts Democrats, Sen. Elizabeth Warren and Rep. Katherine Clark.

“Betsy DeVos is the worst Secretary of Education this country has ever seen—by a large margin,” Warren said in a statement. “Secretary DeVos has spent her first year bending over backwards to allow students to be cheated, taking an axe to public education, and undermining the civil rights of students across the country. Secretary DeVos has failed in her job and she must be held accountable.”

The report found that DeVos:

Has looming conflicts of interest: Before she joined Donald Trump’s cabinet, DeVos, a Michigan billionaire, evangelized for school choice. Her ethics agreement disclosure, unveiled after her memorable confirmation hearing, revealed that she had at least $580 million in assets and had to divest from 102 financial holdings that conflicted with her work as education secretary—including stakes in a student loan debt collection agency, a for-profit college operator, and other education-related companies. She still holds three family trusts and “has yet to disclose the assets in two trusts,” notes the report. “By ignoring longstanding ethical norms for powerful public officials, Secretary DeVos has left the possibility that she has used this power to enrich herself and her family wide open.”

Hired department officials with ties to the for-profit college industry: In her pursuit to roll back regulations at the Education Department, DeVos has focused on reversing for-profit college guidelines put in place by the Obama administration. Weeks after she was narrowly confirmed by the Senate, DeVos hired Taylor Hansen—who spent years working as a lobbyist for the Career Education Colleges and Universities, the largest association of for-profit colleges—as her special assistant. Hansen had long rallied against the so-called gainful employment rule, an Obama-era provision that lets the government stop giving loans to for-profit colleges whose graduates are unable to make enough money to repay their debt. After ProPublica reported on Hansen’s past affiliations, he resigned—but not before the department rescinded an Obama-era rule that prevented loan collectors known as “guaranty agencies” from charging fees on student borrowers who default and agree to repay the loans. Hansen’s father was running one such agency, United Student Aid Funds, when it sued the Education Department over the rule in 2015. (The company has since changed its name to Strada Education Network and denies its involvement in reversing the rule.)

That same month, DeVos tapped Robert Eital as her next special assistant. The report points out that Eital, who worked as vice president of regulatory legal services for Bridgepoint Education, a for-profit college operator, remained employed by Bridgepoint for two months while he was working as DeVos’ assistant. Bridgepoint had been under federal investigation, and it recently settled a lawsuit alleging deceptive lending practices. Last April, Eital became DeVos’ special counselor, overseeing the department’s regulatory reforms. In August, DeVos brought on Julian Schmoke Jr., a former dean of the for-profit DeVry University, to oversee the department’s chief enforcer against fraud in higher education.

Overhauled and delayed regulations on for-profit colleges: Within the past year, DeVos has also reversed Obama-era rules that allow students at colleges with a history of fraudulent and deceptive practices to seek debt relief from the Education department, and that allow the department to revoke federal funding from for-profit colleges. The department’s inspector general’s office found that the Trump administration had not approved a single application for loan relief, even though the department received more than 25,000 claims last year. In the wake of lawsuits from state attorneys general and consumer groups, the IG’s office demanded the department’s student aid division take action on loan forgiveness—officials subsequently announced they would approve 12,900 claims, but deny 8,600 others.

If that wasn’t enough, the department stopped sharing information with the Consumer Financial Protection Bureau. DeVos’ agency let the Accrediting Council for Independent Colleges and Schools continue to act as an accreditor, even though it had certified notorious schools like Corinthian Colleges and ITT Technical Institute, which closed down in the wake of fraud investigations, leaving tens of thousands of students saddled with debt and useless degrees. The department also let for-profit colleges convert themselves to nonprofits to “skirt regulations,” according to the report.

Undermined civil rights safeguards: The Clark-Warren report points out that DeVos “has reversed, rescinded, overturned, and delayed guidance, regulations, and Education Department oversight of students’ civil rights protections.” Last February, for instance, the Education and Justice departments eliminated a rule that spelled out transgender students’ rights. As one official confirmed to BuzzFeed News, the agency would no longer field complaints from transgender students over bathroom access.

In September, DeVos withdrew an Obama-era rule on how colleges should address sexual violence and replaced it with an interim one that—among other changes—allows colleges to raise the burden of proof when assessing claims of sexual violence. Three months later, the department delayed by two years an Obama-era rule that required states to do something about school districts that put students of color in special education at disproportionate rates. In January 2018, women’s rights groups sued DeVos, claiming the new guidance on sexual violence has led to fewer students coming forward to report assaults.

All of these actions jibe with changes in the enforcement strategy of the department’s civil rights division. The Clark-Warren report cites a memo issued last June by then-division head Candice Jackson, telling investigators to look at complaints individually, rather than asking whether there’s a broader problem at the school in question that needs to be addressed. Jackson’s memo further “indicated” that the department’s regional offices “would gain autonomy and no longer be required to alert key department officials of civil rights complaints.” As of last August, the civil rights division had dismissed more than 1,500 complaints, 900 of them without an investigation.