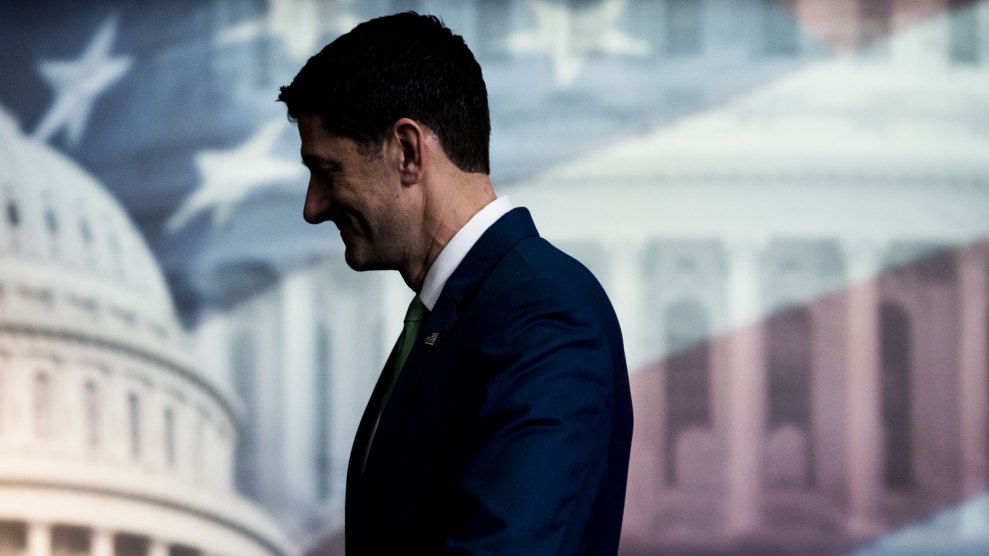 On Wednesday morning, after Democrat Conor Lamb declared victory in the special election election for Pennsylvania’s 18th congressional district, Speaker of the House Paul Ryan (R-Wis.) offered up the best postgame spin he could muster. While the race hasn’t officially been called for Lamb yet, Ryan conceded that Lamb probably won, but said he considered Lamb aligned with Republican ideas. “I think the candidate that’s going to win this race is the candidate that ran as a pro-life, pro-gun, anti-Nancy Pelosi conservative—that’s the candidate that’s going to win this race,” he told reporters. Ryan reiterated that point again later on in the press conference.

It’s an interesting argument, because the Ryan-backed super-PAC Congressional Leadership Fund spent millions of dollars on ads depicting the Lamb as “one of Nancy Pelosi’s sheep.” CLF also sent out fliers warning that Lamb was a “liberal Democrat” who “wants to impose restrictions on gun ownership and the Second Amendment.” If you can’t trust the official super-PAC of the House Republican leadership to fairly lay out the facts, who can you trust?

Lamb, who ran as a pro-union, pro-Obamacare Democrat who opposed cuts to Social Security and Medicare, has in fact said he wouldn’t support Pelosi for speaker of the House (he’ll have to win another race in November to get to that point), and said he opposed new gun laws in the wake of the February shooting in Parkland, Florida. But it’s Ryan’s “pro-life” spin that’s most interesting.

Like a number of Catholic Democrats, including Virginia Sen. Tim Kaine and former Vice President Joe Biden, Lamb has said that he is personally opposed to abortion but supportive of a woman’s right to choose, and doesn’t think the government should pass laws restricting access to abortion. During the campaign, Lamb said he would have voted against a federal ban on abortions after 20 weeks. Although these sorts of Democrats are not without their critics, pro-choice activists generally care more about those politicians’ voting records than they do their personal preferences. For that matter, so do anti-abortion activists. (Ironically, the special election was triggered by the resignation of staunchly pro-life Republican Rep. Tim Murphy, who vacated the seat after allegedly pressuring his mistress to get an abortion.) Here’s the ad FRC Action, the campaign arm of the social conservative Family Research Council, put out in response to Lamb’s position:

Ryan’s framing is an unusual one because reproductive rights are perhaps the most salient divide in American politics. Republicans have adhered to a fierce litmus test on the issue, and conservative groups have spent decades—and vast sums of money—toward a “pro-life” politics that excludes Democrats like Lamb, Biden, and Kaine. If Lamb’s position is now good enough for people like Ryan, it represents a dramatic concession that has far more sweeping ramifications for politics in Washington than a special election to fill out the last 10 months of a term. It would break the dam.

Or it would, anyway, if there were any indication Ryan or social-conservative groups really believed it. When Lamb runs for re-election in November, possibly in the newly created 17th district, Ryan and the rest of the GOP will go back to describing Lamb as the gun-grabbing, Pelosi-loving, pro-choice liberal he was for the duration of the special election. Perhaps the Conservative Leadership Fund will even recycle its ads. They’ll just have to pretend that Wednesday never happened.