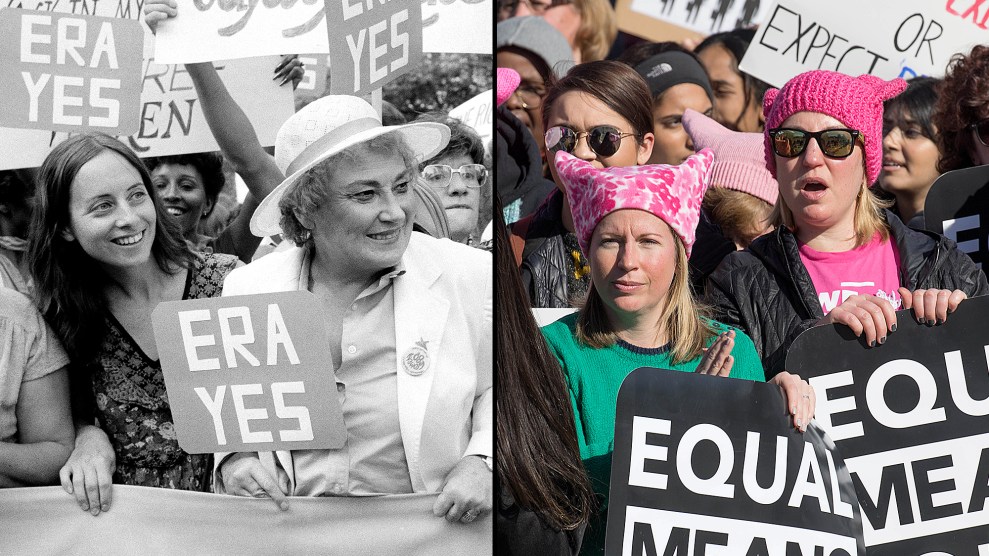 Four decades after the Equal Rights Amendment—the proposal to enshrine gender equality in the Constitution—was declared dead in the water, women’s rights groups think now is the moment to finally get it passed. And they’ll be testing their hypothesis in Illinois this spring.

“People are really fired up,” said Bettina Hager, the DC director of the ERA Coalition, a national group of organizations pushing for ratification. “There’s an energy that’s been there, but it’s magnified in this moment in time. There is an opportunity here.”

The ERA, which says simply “equality of rights under the law shall not be denied or abridged…on account of sex,” was passed by Congress in 1972, at the height of the women’s movement. The proposal’s passage was a joint effort by feminists and labor groups like the American Federation of Labor and Congress of Industrial Organizations. In her testimony before the Senate in favor of the legislation, feminist Gloria Steinem declared, “Women suffer this second-class treatment from the moment they are born.” Supporters erupted in cheers in the Senate gallery when it was passed.

“People are really fired up. There is an opportunity here.”

Because it would have changed the Constitution, the proposal went to the states for ratification after Congress approved it. States had 10 years to pass the amendment, but conservatives and anti-feminist activists, led by the late activist Phyllis Schlafly—who claimed, among other things, that women would lose financial support from their husbands if the ERA was passed—fought fiercely against it. By the time the 1982 deadline rolled around, only 35 states had ratified—three short. The amendment was dead.

But the ERA’s demise never deterred women’s groups from trying to restart the conversation. At least 10 state legislatures, backed by the ERA Coalition (which counts Steinem as a board member) and smaller state groups like the Virginia-based Women Matter, have introduced bills to ratify the ERA in the years since it was first approved. They’ve focused on the so-called “three-state strategy”: if they can get three more states to pass the amendment, they’re hoping Congress will recognize the ratifications that occurred after 1982 as valid and let it pass. The ERA is a “long-term solution to a systemic problem,” says AJ Conroy, a Chicago-based activist pushing for ratification. “When people get angry, they start looking for a solution.” But for such groups, the amendment has so far remained an elusive dream.

And over the years, advocates of the amendment have had to more or less start from scratch each time a bill for ratification gets introduced. Part of the reason? Most people don’t know the Constitution doesn’t already include protections for women. A 2016 poll conducted on behalf of the ERA Coalition and the Fund for Women’s Equality found a staggering 80 percent of the more than 1,000 people polled mistakenly believe the Constitution guarantees protection based on gender. Hager, the DC director of the ERA Coalition, called it an “information gap.”

“It’s very hard to ask people to work on something they don’t know they need to work on,” she said. “But I think with this recent election and the rhetoric that’s now being used, the broader public is seeing how far we have to go.”

All the advocates I spoke to for this story are convinced that this year is different. The #MeToo movement’s wave of victims sharing stories about harassment and assault, plus last fall’s wake-up call for women—who felt like progress might just finally be within reach but instead watched an anti-woman alleged sexual assaulter rise to power—have provided the momentum needed to finally pass the ERA, they say. “It has helped lift that veil and led people to ask and question why our society is still this way,” Hager said. “That’s one of the reasons we’re seeing more energy.”

The Illinois legislature is poised to prove whether 2018 is finally the year.

Rep. Carolyn Maloney (D-N.Y.) said as much at a rally for the ERA in New York in November, pointing to the #MeToo movement as the reason for renewed urgency to get the amendment passed: “If you ever feel like you don’t think that we need to have some changes, I’m going to just say two words to you: Harvey Weinstein,” Maloney said, referencing the Hollywood producer accused by dozens of women of sexual assault and harassment. Last year, Rep Jackie Speier (D-Calif.) held a rally for the ERA in D.C. before the Women’s March on Washington in January, where attendees chanted “We’re not going back!”

Outside of state legislatures, celebrities including actresses Lena Dunham and America Ferrera promoted ratification of the amendment in a social media campaign last year, using the hashtag #EqualRightsNow. Before the election, actress Patricia Arquette sponsored a petition to ratify. In 2015, Meryl Streep sent a letter to Congress urging ratification, a few months before she portrayed British suffragette leader Emmeline Pankhurst in the historical drama Suffragette.

If @GloriaSteinem and Dorothy Pitman Hughes haven't stopped fighting for full constitutional equality for women and girls, neither can we!! Help support their ERA Coalition by getting this bad-ass limited edition tee for you and all your friends at https://represent.com/equalrights #EqualRightsNow #cantstopwontstop

The Illinois legislature is poised to prove whether 2018 is finally the year, with a vote on an ERA bill making its way to the Senate and House in April. The ERA and Illinois have a complicated history: As state after state ratified following passage in 1972, supporters in Illinois, a bastion of progressivism in the Midwest, rallied in Springfield around what they saw as imminent victory in the state. But the Schlafly-led opposition also honed in on the state, and year after year, as the issue was brought before the state legislature, Schlafly prevailed. Since 1982, proposals to ratify the ERA have been re-introduced only sporadically in the state, most recently in 2014, when it came close after passing in the Senate, but ultimately failed in the House because of a lack of energy on the issue.

The bill’s longtime supporters, state Sen. Heather Steans and Rep. Lou Lang, note that this year is already proving to be different. For one, there are several Republicans not up for reelection who Lang anticipates are likely to give their support. And, says Steans, the Senate’s brand new women’s caucus—formed in the wake of the #MeToo reckoning, will discuss the ERA before the vote.

“The stars are aligned,” Lang told Mother Jones. “Given the climate of our country today, I think it is a very important opportunity.”

Luckily, supporters in Illinois have a blueprint for achieving ratification. Despite the ERA’s stagnation in the years since the deadline passed, there has been one notable success: Nevada. Last year, on the 45th anniversary of passage, Nevada became the 36th state to ratify. Janette Dean, an organizer who was involved in the Nevada ratification campaign, told Mother Jones it was a three-year effort of “being the wind at legislators’ backs to put this high at the top of the agenda.” Although the legislature had a Republican majority for much of the push for ratification, which began in 2014, eventually some Republican women came on board—Nevada has the third-highest proportion of women in its legislature in the country.

That the Nevada bill was finally passed after Trump’s election is no coincidence, says Dean. “[Trump’s election] reinforced support for [the ERA], it reinforced the need for it,” she said. “I don’t put Trump as the reason for passage—we were ready to ratify anyway—but he’s a symptom of why it’s needed and has been needed since it was first proposed.”

Even if the ERA is ratified by the states, its legal status is murky.

Despite activists’ optimism, there have been setbacks. Last month the ERA failed to pass in Virginia after a House committee refused to hear the issue and a Senate panel voted it down. Eileen Davis, co-founder of Women-Matter, said the focus of her group—which had launched an advertising campaign in Virginia featuring a photograph of a young girl modeled after the Fearless Girl statue—is now on Illinois and Arizona, another contender for ratification. Democratic Rep. Pamela Powers Hannley said she and other ERA supporters plan to bring the bill to committee this month in the majority-Republican Arizona legislature.

In addition to legislative foot-dragging, the movement has detractors. Critics, including some feminists, argue that, because there are already laws in place that protect women from gender discrimination, such as Title IX and the Family and Medical Leave Act, the amendment is unnecessary. Some maintain the Equal Protection Clause of the Fourteenth Amendment already prohibits discrimination on the basis of gender, an assertion the late conservative Supreme Court Justice Antonin Scalia rejected in a 2011 interview on the role of the Supreme Court, saying, “Certainly the Constitution does not require discrimination on the basis of sex. The only issue is whether it prohibits it. It doesn’t.”

And even if the ERA is ratified by the states, its legal status is murky. If the proposal does head back to the federal government, Congress could decide to reject ratification because the deadline has passed, and the whole process would have to start from scratch.

Supporters, who point out Congress once allowed states to ratify an amendment more than 200 years after it was introduced,* reject the notion that the ERA is unnecessary just because other laws protect against gender-based discrimination. Beyond its obvious symbolic significance, the amendment’s proponents say passing it would provide a stronger legal defense against challenges to laws protecting women’s rights: Although legislation can be altered fairly easily, overturning a constitutional amendment is a much bigger task.

“The Constitution was set up to protect fundamental rights,” Hager says. “You can’t vote away a constitutional amendment. They’re meant to be lasting. We should make sure our rights are protected in a permanent way.”

Correction: An earlier version of this story misstated the process by which the earlier amendment was ratified.