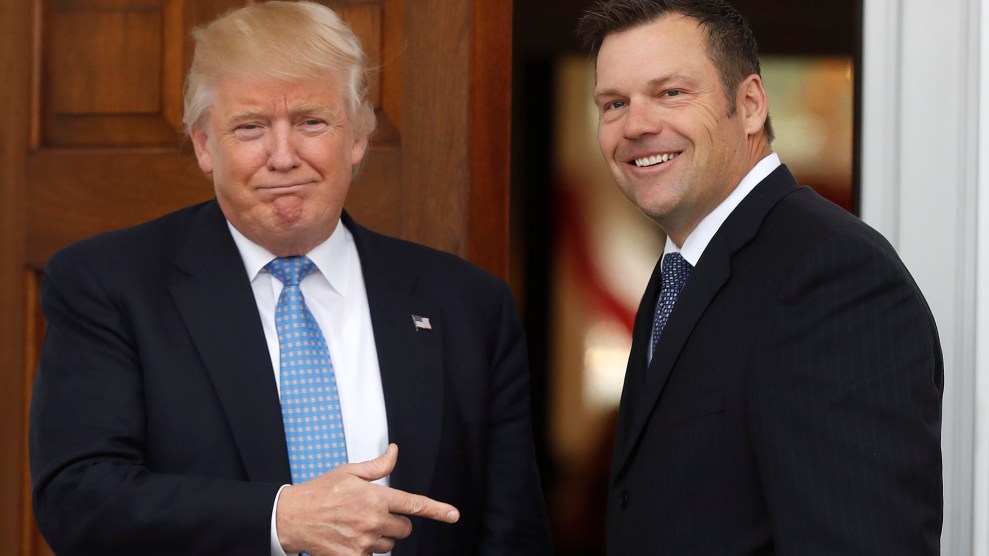 Donald Trump meets with Kris Kobach after the 2016 election.Carolyn Kaster/AP

In October 2014, Charles Stricker III went to the Department of Motor Vehicles in Wichita, Kansas, to get a new driver’s license and register to vote. Stricker, who’d recently moved back to Wichita from Chicago, brought his Illinois driver’s license, Social Security card, and utility bill to confirm his identity and residence. He was asked if he wanted to register to vote, and he said yes and then checked a box on the application form affirming that he was a US citizen. He walked out with a temporary driver’s license and believed he was registered to vote.

Three weeks later, Stricker and his wife went to their polling place at Central Christian Church in northeast Wichita. When he got to the front of the line, a poll worker scanned the voter registration rolls and told Stricker he was not registered. The best she could do was give him a provisional ballot.

While his wife voted in a private booth, Stricker filled out his provisional ballot at a plastic table in the center of the room. “It was almost like I was on display,” he told me when I visited Kansas last year on assignment for the New York Times Magazine. “It was very awkward to say the least. There was a line out the door and everyone was staring at me.”

After the election, Stricker learned that his ballot was not counted. He was one of 35,000 voters in Kansas who had their registrations blocked by the state for failing to provide documentary proof of citizenship, such as a birth certificate, passport, or naturalization papers, when they registered. Stricker, 39, was born in Missouri and managed the nicest hotel in Wichita. “If this can happen to me, it can literally happen to anybody,” he said. “Something is fundamentally wrong here.”

The proof-of-citizenship measure prevented 1 in 7 new voters from registering between 2013 and 2016.

In 2016, Stricker joined a lawsuit filed by the ACLU against Kansas Secretary of State Kris Kobach, the architect of the law, who the following year would be named vice chair of President Donald Trump’s now-defunct election integrity commission. The proof-of-citizenship measure prevented 1 in 7 new voters from registering between 2013 and 2016, nearly half of whom were under 30. A federal appeals court temporarily blocked a key part of the law before the 2016 election, finding “there was an almost certain risk that thousands of otherwise qualified Kansans would be unable to vote in November.”

On Tuesday, the case will go to trial in federal court in Kansas City, Kansas. The outcome has significant national implications for voting rights. Kobach views his Kansas law as a model for the rest of the country and wants every state to adopt proof-of-citizenship laws. If he loses in the lower courts, Kobach is almost certain to appeal to the Supreme Court. And if he wins, millions of eligible voters across the country could be disenfranchised if other states adopt similar laws with the knowledge that they’ll hold up in court. According to the Brennan Center for Justice, 7 percent of Americans do not have ready access to their citizenship documents.

Kobach also has a backup plan if he loses the case. He’s already shared a draft of federal legislation with the Trump administration that would allow states to require proof of citizenship for registration, and he has asked Rep. Steve King (R-Iowa), an anti-immigration hardliner, to introduce the bill in the House. (He was fined last year by a federal court for telling the court that “no such document exists,” despite having shared a copy of the legislation with Trump.)

The trial will shine a spotlight on Kobach’s frequent claims of mass voter fraud. He says the proof-of-citizenship law is necessary because in Kansas, “the illegal registration of alien voters has become pervasive.” But there’s little evidence of voting by noncitizens in Kansas, as Mother Jones has reported:

In 2015 he became the only secretary of state in the country with the power to personally prosecute voter fraud cases. Since then, Kobach’s office has convicted just nine people for illegal voting, out of 1.8 million registered voters in the state. Only one of them was a non-citizen. The other eight were citizens who voted in two different states, and most of them were over 60 years old, owned property in both places, and were confused about voting requirements.

The experts Kobach will call to defend the law are controversial in their own right. One of them is Hans von Spakovsky of the Heritage Foundation, who was also a member of Trump’s election integrity commission and has a long record of greatly exaggerating the prevalence of voter fraud. Another is Jesse Richman, a political science professor at Old Dominion University who was cited by Trump when the president falsely claimed that millions of people had voted illegally in the 2016 election. Kobach claims that Richman’s research shows that 18,000 noncitizens are registered to vote in Kansas, although Richman found only six noncitizens who had attempted to register to vote.

The trial is expected to last a week, with a decision before November, when Kansans will go to the polls to elect their state and federal representatives and when Kobach is hoping to be elected governor. The ruling will determine whether more than 30,000 people initially blocked by the proof-of-citizenship law are able to vote in November, and it could impact the outcome of several contested Kansas elections, including the governor’s race and two competitive US House races.