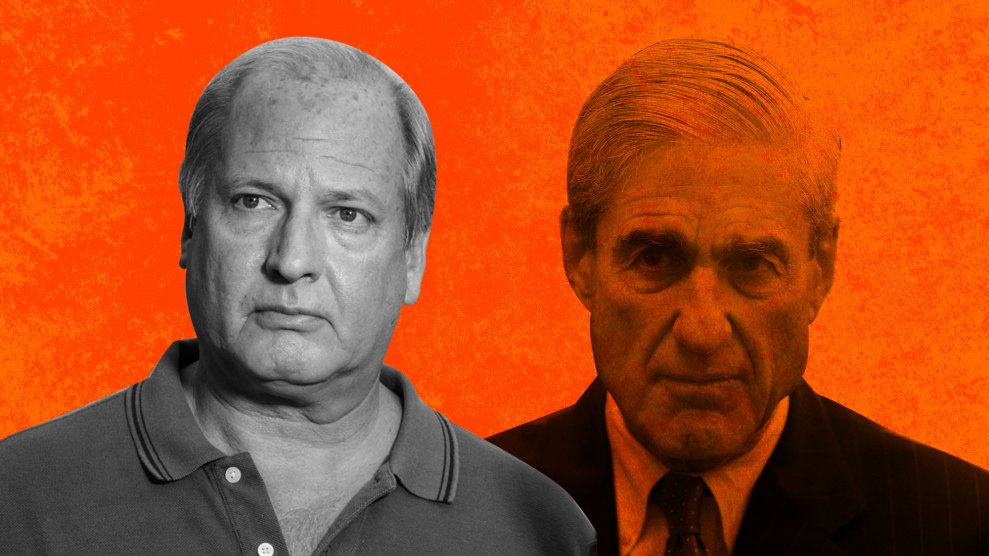 In 2012, Vin Weber, a former Republican congressman from Minnesota turned DC power-lobbyist, was a foreign policy adviser to presidential candidate Mitt Romney and in line for a top administration job, should Romney win the White House. But Weber’s well-paid lobbying work conflicted with his political ambitions. In February 2012, Paul Manafort and business associate Rick Gates sought out Weber’s lobbying firm, Mercury Public Affairs, and another outfit, the Podesta Group, to lobby Washington to advance the interests of their client, the Vladimir Putin-friendly president of Ukraine, Viktor Yanukovych. The work was lucrative—it ultimately netted Mercury more than $1.1 million—but problematic. It might have required Weber to register as a foreign agent for a regime known for its close ties to Russia, which Romney famously denounced as America’s top geopolitical threat. That, in turn, might have complicated Weber’s chances of landing a job in a Romney White House.

Prosecutors charge that Manafort and Gates arranged for a Brussels-based think tank, the European Centre for a Modern Ukraine, to be “the nominal client” of Mercury and the Podesta Group, “even though in fact the Centre was under the ultimate direction of the Government of Ukraine, Yanukovych, and the Party of Regions.” Weber and Mercury say they were taken in by this ruse.

But Weber was no victim in the deal, two sources knowledgeable about his Ukrainian lobbying work say. Eager for the business but wary of a pro-Russian taint, the sources say, the former congressman pushed for Mercury and Podesta to avoid registering with the Justice Department under the Foreign Agents Registration Act, or FARA, as agents for Ukraine. Weber directed his attorney, Kenneth Gross of Skadden, Arps, Slate Meagher and Flom, to draft a legal opinion, which argued it was permissible for the firms not to register under FARA. Gross declined to comment.

Prosecutors cite an email in which Gates told both firms they would work for “the government of Ukraine.” The firm’s supposed client, the European Centre, is not mentioned.

Lobbyists representing foreign governments or political parties are required to file under FARA and to disclose all their government contacts. (They are also required to file if a foreign power or party is the principal beneficiary of their lobbying.) By representing a think tank, Mercury and the Podesta Group could register with Congress under the Lobbying Disclosure Act, which requires far less disclosure and usually generates less press attention, a plus for a candidate for a senior White House job. Weber’s work for Ukraine was not reported in the media until July, about three months after his firm registered. And even then, the arrangement allowed Mercury to downplay the work. The “Centre is funded by a group of Ukrainian business people,” not Yanukovych’s Party of Regions, a spokeswoman for the firm inaccurately told the Daily Beast at the time.

Weber’s push for the two firms to avoid FARA caused conflict with the Podesta Group, where some employees believed that Ukraine was clearly the main beneficiary of their work. The Podesta Group eventually agreed to skip registering under FARA after insisting that the firms also obtain a written certification from the European Centre that it was not funded or controlled by a foreign government or a political party, the sources say. The director of the center, Ina Kirsch, supplied the firms with such a certification. Prosecutors say that Gates and Manafort knew that the certification was misleading.

Six years later, the lobbying spearheaded by Manafort is at the center of Washington’s biggest scandal. The Special Counsel’s scrutiny of the Ukrainian lobbying led the Podesta Group to collapse and Tony Podesta’s career to crater. Gates and a Dutch lawyer peripherally involved in the effort have pleaded guilty to federal charges. Manafort faces a slew of charges, including money laundering and tax evasion, that could land him in prison for the rest of his life.

Weber, along with Podesta, has reportedly been under investigation since last fall. And he remains at the head of Mercury—“there’s been no change in my status,” Weber told Politico in January—which has continued to prosper. Mercury, in fact, claims to have had its best year ever in 2017. It has kept up its foreign lobbying business, in recent months signing on as one of a number of DC firms lobbying for Qatar. Last month, Mercury registered to represent the Turkey-US Business Council, a group formerly headed by a shadowy businessman, Ekim Alptekin, who in 2016 arranged for Michael Flynn to secretly work for Turkey shortly before Flynn became President Trump’s national security adviser.

Mike McKeon, a Mercury partner and spokesman, declined to address questions from Mother Jones about Weber’s role in the firm’s decision to avoid registering under FARA, but issued a general denial. “This is all totally false,” he said via email.

Mercury says it is cooperating with the Mueller probe, but it has denied wrongdoing. It insists it was duped by Gates. McKeon said last month that Gates “admitted that he didn’t tell the truth to the [g]overnment and didn’t tell the truth to our lawyers when he spoke to them about this project. While he and others involved with this matter may have acted criminally and tried to hide it, we have acted appropriately, following our counsel’s advice from the start.”

Mercury, however, is not out of the woods yet. And accounts of Weber’s 2012 push for Mercury and Podesta to avoid registering as foreign agents are among reasons he and his firm have reason to sweat Mueller’s ongoing probe.

For one thing, the special counsel’s court filings have repeatedly contradicted Mercury’s public description of its work for Ukraine. Last year, McKeon told the Associated Press that the firm had not taken direction from Manafort and Gates’ firm. “We work for and under the direction of the Centre, no one else,” he said.

Mueller and his team say otherwise. “At the direction of Manafort and GATES, company A and company B engaged in extensive lobbying,” prosecutors allege in a court filing in connection with Gates’ plea deal. (Mercury has been identified as Company A and the Podesta Group as Company B.) There’s more: Gates and Manafort held weekly calls with Mercury and the Podesta Group “to provide them directions as to specific lobbying steps that should be taken,” and “both congratulated and reprimanded” the firms “on their lobbying work,” prosecutors say in a new indictment of Manafort, filed in late February. And they allege that both Mercury and Podesta “were paid for their services not by their nominal client, the Centre, but solely through offshore accounts” controlled by Manafort.

Perhaps more problematically for Mercury, the court filings undercut Weber and Mercury’s claims of ignorance about Yanukovych’s control of the the European Centre. Prosecutors have repeatedly cited communications that suggest some Mercury employees understood that the main beneficiary of their lobbying was Yanukovych and his party.

In November 2012, Gates asked Mercury and Podesta to prepare an assessment of their lobbying work so that the “President,” meaning Yanukovych, could be briefed by Manafort “on what Ukraine has done well and what it can do better as we move into 2013,” prosecutors note in court filings. An October indictment of Manafort and Gates cites an email in which Gates told Mercury employees they would be “representing the Government of Ukraine in [Washington] DC.”

Andrew Weissmann, a top prosecutor on Mueller’s team, said during a court hearing last month that the special counsel’s office was investigating “FARA violations by Paul Manafort, Rick Gates and others.” Mueller is prosecuting Manafort for failing to register under FARA, and for making false claims in 2016 and 2017 to the Justice Department related to his Ukrainian lobbying. The danger for those who worked with Manafort and Gates for Ukraine is clear. If they knowingly failed to comply with FARA or made false claims in FARA filings, they could face similar charges.

Last April, Mercury retroactively filed under FARA regarding its work for Ukraine. But Gross, Mercury’s lawyer, still said in that filing that the firm “represented the European Centre for a Modern Ukraine,” not the Ukrainian government. Does Mueller buy that?

The indictment targeting Manafort, filed the day Gates took a plea deal last month, suggests he may not. Various Mercury and Podesta employees, the indictment says, “viewed the Centre as a fig leaf.” In an undated email cited by prosecutors, one Mercury employee told another that Gates did not actually work for the center. That work is “in name only,” the first employee said. “[Y]ou’ve gotta see through the nonsense of that.”