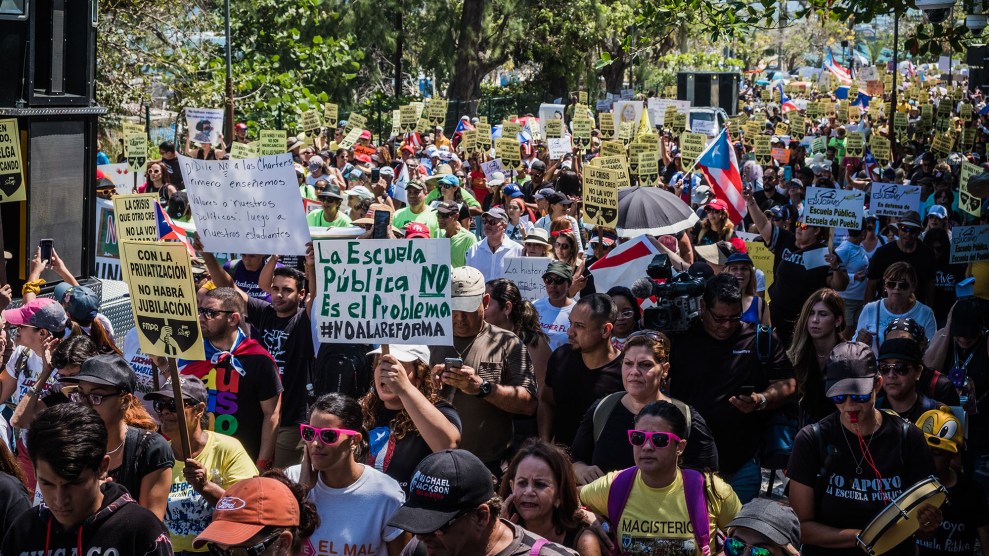 Shouting to be heard over protest chants in the background, Christina Rodriguez tried to explain why she wasn’t in her classroom that Monday but was marching and protesting in front of the Capitol building in San Juan, Puerto Rico.

“We are here because we haven’t been treated fairly,” said Rodriguez, a tall woman with her hair pulled back under a ball cap and wearing a T-shirt that read “#Todosporlosniños” (“All for the children”). The teacher from Hatillo, a town on the coast about an hour west of San Juan, said teachers had come to demonstrate because the educational reforms proposed by the island’s government are going too far and “don’t take us into account.”

After a decade-long recession and outstanding debts exceeding $120 billion (not to mention the $95 billion in damages caused by Hurricane Maria), the government of Puerto Rico has proposed significant changes to the island’s education system. Puerto Rico’s schools were already troubled before the hurricane, with poor student outcomes, outdated facilities, and underpaid staff. But long-simmering tensions resurfaced after the storm with new proposals that have long been on the drawing board but were never implemented.

But the draconian cuts are not the only reason for the outcry. Much of the ire has focused on Julia Keleher, the island’s American-born secretary of education, who is seen by teachers as using the chaos and upheaval of Hurricane Maria to close schools and introduce privatization to the island’s school system through charter schools and vouchers.

Hailed as a “profound transformation” by Puerto Rico Gov. Ricardo Rosselló when he introduced the measure on February 5, the plan would go into effect for the 2019-20 school year. It proposes consolidating schools, laying off an unknown number of nonpermanent teachers, and implementing a less centralized system of control.

Rodriguez joined thousands of teachers who gathered at Luis Muñoz Rivera Park for a mile-long march to the island’s Capitol building, chanting, “Julia go home!” and “Where is Ricky? Ricky isn’t here, Ricky is selling what’s left of the country.” (They are referring to Rosselló, whom many refer to simply as “Ricky.”)

The demonstration was timed to attempt to convince the island’s Senate to vote against the bill, but it was approved the day they marched. It has since passed the House and is awaiting the governor’s signature, which his spokeswoman says is forthcoming.

Of the approximately 1,270 schools on the island, nearly 170 were closed at the end of the 2017 school year—even before the hurricane—because of the island’s fiscal crisis. The governor’s most recent fiscal plan, which the government needs to get approved by the congressionally appointed fiscal control board, estimated Puerto Rico’s student population of 345,000 would shrink by 10 percent next year and called for closing 300 more schools by 2022. The governor’s plan calls for cutting the education department’s budget by $466 million per year by 2023, savings that will be achieved in part by “reducing the size of the system.” Officials estimate 26,000 students didn’t return to classes after Maria, while the number of teachers remained relatively stable.

Keleher’s salary has been one reason the teachers are so angry. A business consultant by trade, who advocates of public education accuse of pushing a mass privatization of the education system, is supposed to receive $80,000 (plus bonuses) by law. But when she was appointed in 2017, she signed a consulting contract with an arm of the island’s government for more than $20,000 per month, or $250,000 annually—which is nine times larger than the average teacher’s salary of $2,325 per month.

Teachers worry that Keleher’s plans to close and consolidate schools will lead to a mass firing of teachers. “Before the hurricane, I had 345,000 kids,” Keleher told Mother Jones. “After the hurricane, I have 319,000 kids. Before the hurricane, I had 31,000 teachers. After the hurricane, I have 31,000 teachers. That sound right? Do you need less teachers with less students?” When asked how many teachers would be fired, Keleher said that although plans are not final, “we are not going to fire anyone who has a permanent position. But we are going to have to think about how to make the best use of their time and skills,” hinting at a possible reassignment or major reallocation of responsibilities. She added that the reforms are designed to “ensure the management of their human capital is fully focused on the needs of their students rather than what the department” would normally do, which she describes as comparable to “a jobs agency.” More than 5,000 teachers in Puerto Rico work on year-to-year contracts, according to the New York Times, which could leave them vulnerable to layoffs.

A common complaint from teachers and some parents is that the specifics of the government’s reform efforts are being drafted without the teachers’ input. One teacher in the mountain town of Orocovis told me that for her, one of the worst parts was “the uncertainty of not knowing what’s going to happen,” and suggested a “secret list of schools” that were slated to be closed was out there. Her school hasn’t had electricity since Maria.

When I asked Keleher about the government’s transparency with its own workers about closings and other looming changes to the education system, she says that they were just “collecting data” and have not yet “gone through any of this yet with them publicly,” which includes how many schools are slated to be cut. She notes that reviews of current buildings and equipment conducted so far suggest that the majority of the island’s schools “have a utilization rate of less than 60 percent,” so it only makes sense to consolidate where possible. As for the rumored list of schools, Keleher was emphatic: “I don’t have a list.”

Among the most vulnerable groups are students with special needs. One mother who took part in the march was Jinnette Morales Díaz, whose 13-year-old daughter Leydi is one of the island’s 140,000 special-education students. She’s emerged as one of the most vocal and consistent advocates for better treatment for the island’s most vulnerable students.

“Everything that’s being orchestrated by the reform goes against all the children of Puerto Rico,” she said, sitting in her home in the Hato Rey section of San Juan, as Leydi played with an iPad nearby. She describes the reforms as a perfect example of how the Department of Education treats “children as merchandise.”

Special-needs students are suffering the most among Puerto Rican public school students, she says, and many parents of those students haven’t sent their children back to school since the hurricane, because they do not have confidence that the facilities are able to provide appropriate care. Under the governor’s reform bill, things could get worse because charter schools may not be required to admit special-needs students. Morales Díaz noted that the department has been subject to fines from the federal government over its treatment of students with disabilities.

“The general vision is that students with functional diversity are a waste of money,” Morales Díaz told me, adding that Keleher once told her that there were “too many” special-education students in the system.

Keleher told me she was unaware of special-needs students who aren’t able to attend school, but acknowledged that a class action lawsuit decision going back more than 30 years required the district to pay federal fines and established minimum special-education standards for the department.

“It’s not like rampant violation and nobody cares,” Keleher told me. “We have to report to a judge and there’s a monitor assigned. There’s a lot of oversight.”

Keleher estimates there are 140,000 special-needs students out of the system’s 340,000 total—a rate of more than 40 percent. She sees this relatively high rate as the result of a system in which more funding is available to local districts and schools with these students. She described a system in which the same contractor responsible for identifying these children is the one slated to provide services.

“I can’t speak to each, to the specificity of each kid, and I shouldn’t make generalizations,” Keleher said. “But something seems to warrant further investigation here. Because no other system looks like this.” (The rate of special-education students in Puerto Rico is significantly higher than the national average of 13 percent.)

At Monday’s march, I met Rafael Bernabe, a former candidate for governor representing the worker’s party—a relatively minor left-wing party within Puerto Rican politics. He said that the government of Puerto Rico and the island’s fiscal control board were taking advantage of the devastation of Maria to force “reforms that they wanted to approve a long time ago” but never could. And even though the legislature has approved the measure and the governor will sign it into law, he said the fight isn’t over.

“If teachers are mobilized and they are struggling and they are protesting against these charter schools, it makes it much more difficult for anybody to think of taking over a school,” he told me as we walked in front of the march toward the Capitol. “So the struggle doesn’t end the moment they approve the legislation. The struggle continues after that.”