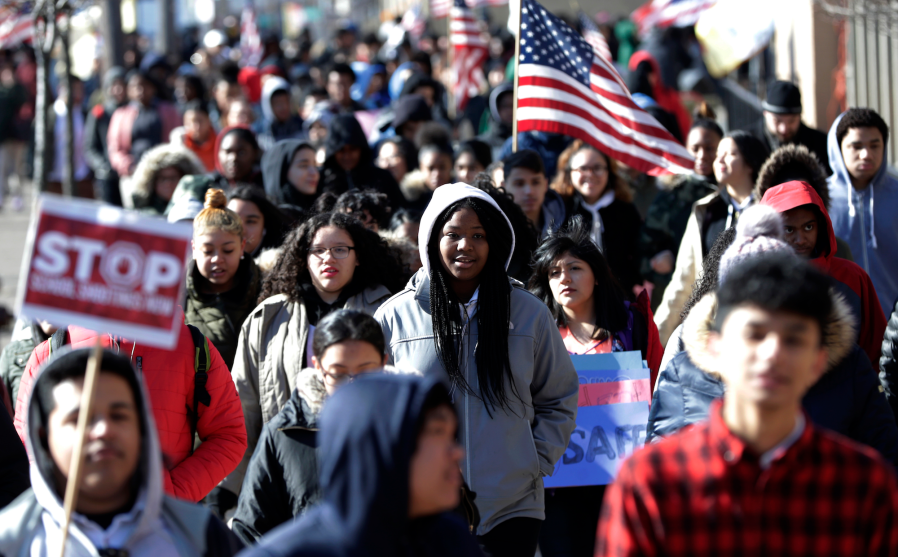 Students across the United States will participate in coordinated school walkouts Wednesday morning to protest gun violence and call on Congress to enact stricter gun legislation after the Parkland, Florida, shooting that occurred exactly one month ago. The historic demonstrations will start at 10 a.m. across every time zone and last 17 minutes to honor the 17 people killed at Marjory Stoneman Douglas High School.

The protests come as President Donald Trump abandoned his previous calls to raise the minimum age to purchase guns from 18 to 21. The school safety plan put forth by the White House on Sunday was largely viewed as a significant bow to the National Rifle Association.

Mother Jones will provide rolling coverage of the walkouts below. Stay tuned.

For more on the history of student activism in the United States, be sure to read our great timeline tracking the role of young people in helping shape and build progress.

Some scenes from the west coast as protests begin to take off.

CA Assembly Democrats, staff members and young people walk out of the Capitol and stand in silence in solidarity with national school walk-out. pic.twitter.com/Ftz5hpOO6e

At Ruth Asawa High School in San Francisco: “We are demanding all forms of gun control today” pic.twitter.com/mo2qXvyyu2

Walkouts in the Mountain time zone, including protests at Columbine High School, are underway.

WATCH: At Columbine High School, students release balloons one at a time in honor of the 17 victims of the MS Douglas High shooting. #NationalWalkoutDay pic.twitter.com/bPOzrlOOPc

Students at Glacier High School in Kalispell are prepping their memorial to recognize victims of the #FloridaSchoolShooting #mtnews pic.twitter.com/1nyYh8KvDt

Reporting from Boise High School – this is Lily, a sophomore. “A lot of people don’t think much of Idaho. But we’re people & our voices matter. Our teachers said this is our right to practice civil disobedience.” pic.twitter.com/sJrjScuN7I

This video of a student participating in #NationalWalkoutDay alone at his school is quickly going viral.

Still on the east coast, protestors have gathered outside the Capitol building to continue the day of protests. Mother Jones reporter Nathalie Baptiste is on the scene as the crowd builds, while reporter Kara Voght continues her coverage of the Senate Judiciary committee’s hearing on school safety:

This is the crowd at the Capitol and lots more are streaming in #NationalSchoolWalkout pic.twitter.com/8KMrdzo8nC

These three girls are 8th graders at Silver Spring International MS in MD. Last week there was a gun threat at their school and they’re tired of constantly being worried that they’ll be shot at school. #NationalSchoolWalkout pic.twitter.com/DC9u4NEJoB

The next wave of protests in the central time zone are underway.

Chicago students chant “Hey hey, ho ho, these guns have go to go” as they march on the South Side. The mood is upbeat. Police are helping keep the streets clear of traffic. pic.twitter.com/QIE3OBpK3M

The march is underway on a brisk Chicago morning. Administrators here are supporting the walkout. Students I’ve spoken with say gun violence is a daily concern. pic.twitter.com/DO6KCJoedv

In addition to the protests, groups of students are also registering to vote Wednesday morning in order to elect lawmakers that will act on gun control.

A moment of silence for the 17 lives lost a month ago, followed by an overwhelming amount of students who registered to vote, wrote letters to Reps, and signed a banner honoring Parkland. @NeverAgainMSD we support you❤️ #NationalWalkoutDay #NeverAgain pic.twitter.com/lagR9JzxcJ

Voter reg table- “power to the polls” a big part of day. Message is 16 year olds can pre-register to vote. pic.twitter.com/sTAntVL99U

Powerful moment in DC with huge crowd of students sitting with their backs to the White House for 17 minutes of silence. #NationalWalkoutDay #Enough pic.twitter.com/tvP8t80FXE

A walkout in support of gun control at Al-Iman school, the Islamic school that the 2015 Chapel Hill shooting victims attended as children (📷: @taiyyaba) pic.twitter.com/giDkIc6efb

Several reports on social media are circulating of teachers and school administrators blocking students from participating in the walkouts.

@womensmarch Hawthorne High School has locked us in and blocked all exits not allowing us to participate in the walk out, but we wish to be out there with everyone #WalkoutWednesday #StudentsStandUp #ENOUGH #WalkOut

Mother Jones reporter Nathalie Baptiste is at the scene outside the White House.

I’m at the White House where high school kids have gathered for the #NationalSchoolWalkout. They’re observing 17 minutes of silence for the 17 killed in Parkland. pic.twitter.com/Gfe7d7ev7T

The march is on the way to the Capitol building #nationalschoolwalkout pic.twitter.com/KdeOuCnVcY

These students from Bethesda Chevy Chase High School in MD did *not* get permission to come out here, did it anyway. #NationalSchoolWalkout pic.twitter.com/FFeK7q2HBy

Lawmakers, including Sen. Chris Murphy, voice their support amid the students’ demonstrations.

In honor of the #NationalSchoolWalkout and the 17 students & teachers killed in Parkland, I'm heading to the Senate floor to read the names of victims of gun violence.

On the ground in Zuccotti Park as part of #NationalWalkoutDay is @NYGovCuomo with students at Leadership and Public Service HS in Lower Manhattan #nbc4ny pic.twitter.com/KrG3BrBvbZ

I stand with these children. #NotOneMore

These kids are leading the charge against gun violence – and I’m proud to be here fighting alongside them. #NationalWalkOutDay pic.twitter.com/U7fcNaQhhi

11th grader Gabe Gurulé is walking out today for his his little brother who will be starting school next yr – he doesn’t want the future kindergartener to live in a world where he has to worry about someone w an ar15 coming into a classroom. pic.twitter.com/VdFhuxCMct

Pretty remarkable over a 1,000 students sitting down and in silence for 6 mins now. #NYC School #Walkout with LaGuardia High School #Parkland #fightingGunViolence pic.twitter.com/azmqPAfwtk

students walking out of Bedford Academy High in Bed-stuy (they have some classes inside the YMCA) pic.twitter.com/246wODMvJf

Some students from Marjory Stoneman Douglas High School are participating in the protests. David Hogg, who has been outspoken about Congress’ inaction, provides a live stream (below) of the event:

Protests on the east coast have taken off:

Students from Center For Inquiry school 2 have begun their walkout and march in downtown Indianapolis pic.twitter.com/CEl6LQvfS5

Several protests are already underway, including one that will take students to the White House.

STUDENT DEMONSTRATORS HEAD TO WHITE HOUSE: Students at Montgomery Blair High School began their National School Walkout demonstrations just after 8 a.m. by staging a march from their Silver Spring campus that will take them to the White House. WATCH LIVE: https://t.co/jZtf1Tvkgv pic.twitter.com/k4Et518Hvm

Covering a walkout this morning at an elementary school in Virginia, and the 11-year-old organizers had a press packet ready for me. pic.twitter.com/eeElhGciid

"It could have been any one of us that Parkland shooting and that Sandy Hook shooting, so I think it's important for us to be out here for voicing their opinions, and just to get something done," said a freshman student from Blair High School. #NationalWalkoutDay pic.twitter.com/nM16TvumrM

Savva, also 15, is outside the White House too. He thinks that the influence of the NRA is preventing change pic.twitter.com/4HNfJ2RAZz