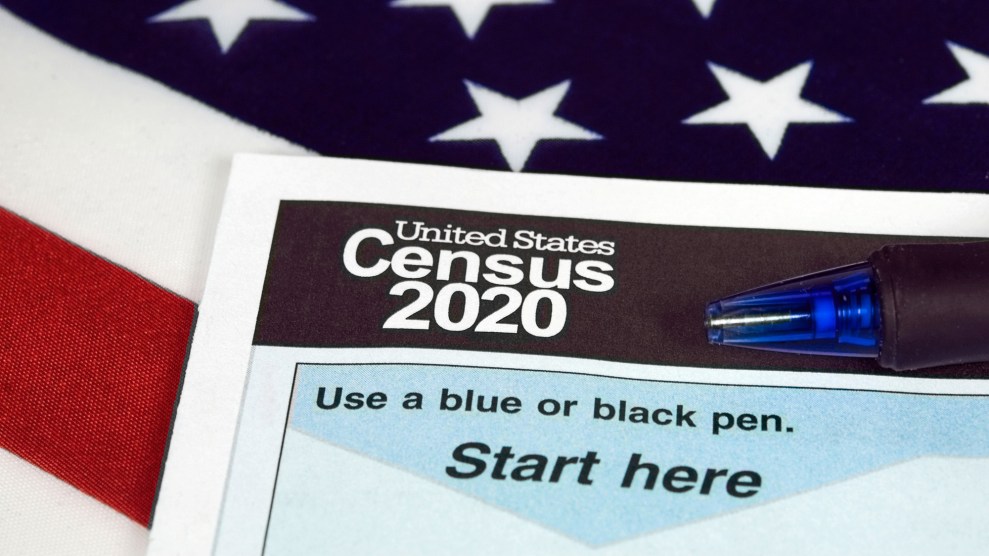 President Donald Trump is threatening the 2020 census from every direction: Cutting its budget, scaring immigrants away from answering its questions, and prohibiting the Census Bureau from hiring the best people for the job. While we have to defend this invaluable source of data and the foundation of accurate political redistricting, we don’t have to lose sight of what a strange creature the census is. The census has always reflected a Trumpian view of America, revealing our deepest anxieties about race and inequality. It’s a bit like a bathroom mirror the morning after a big party, reflecting what we’ve been up to in a way that is honest and ugly.

As a sociologist, I love the census. I use it every day, at work, at home, with my kids. But don’t forget the census’s genealogy. The section of the Constitution that required the census was the same that set out the ignominious Three-Fifths Compromise that counted an African-American slave as three-fifths of a person for purposes of apportioning congressional seats.

After Emancipation, the census reflected white American hysteria about miscegenation, distinguishing Blacks, Mulattos, Quadroons, and Octoroons. As Paul Schor points out in his book Counting Americans, which recognizes 200 years of censuses as an archive of our racial obsession, rules for demarcating race and ethnicity proliferated: People whose parents were black and Chinese were the race of their father; people who were black and American Indian were the race that “predominated,” people who were black and Mexican were sometimes Mexican; people who were black and white were always black. The Census put people in a race called “Chinese” before it had categories for anyone from the rest of Asia. Then there was 1930, when Mexicans became their own race, and 1940, when they weren’t anymore. While we have multiplied, reshuffled, and sliced our racial categories, they have never been comprehensive or comprehensible to anyone but Americans. Like the Trump presidency itself, the census’s foundations are racial.

The census has always reflected a Trumpian view of America, revealing our deepest anxieties about race and inequality.

Yet the census is our best source of information about the nation, and the only way to draw fair legislative boundaries. And today it is in danger. Attorney General Jeff Sessions has proposed asking who’s a citizen and who isn’t, which both scares noncitizens from participating in the count, and provides the data for a Republican disenfranchisement scheme to only count eligible voters (instead of all residents) when drawing federal or state legislative districts. The plan to apportion representatives without counting noncitizens (or children or people with criminal records who can’t vote) would not just diminish Democratic districts, but would make democracy a privilege, not a right. In February, 20 state attorneys general sent a letter to the administration laying out the “irreparable harm” a citizenship question would cause and warning that it would violate the Voting Rights Act.

Adding to the problem, the administration has indicated it will only dole out census jobs to US citizens. The main effect of this announcement was to broadcast the words “census” and “American citizen” in the same sentence for yet another news cycle, further discouraging immigrants—including those with green cards or work permits—from participating. More practically, the move deprives the bureau of the 3,500 specialized employees that the 2010 Census used because they could speak multiple languages to find non-English speakers (who tend to live in Democratic districts).

Next, Trump considered making his highest ranking official in charge of the census Thomas Brunell, a political science professor who has no government experience and has testified for Republicans as an expert witness defending gerrymandering. Democratic Sens. Cory Booker of New Jersey and Brian Schatz of Hawaii spoke out against Brunell’s expected appointment, and two weeks later Trump pulled his name. In the stopgap budget passed in January, the only nonmilitary agency to get a funding increase was the Census Bureau. Fears of a catastrophically underfunded census have receded as the administration seems to be committing to conventional funding levels. Yet critics say the funding still falls short and will prevent needed technological improvements, like mobile apps for field workers instead of paper forms.

Trump’s anti-immigrant rhetoric has also done damage to the census. In the Census Bureau’s field tests, people have already falsified answers about who lives in their home out of fear immigration agents will come for them. Spanish speakers said they feared raids and deportation. Arabic speakers worried about a Muslim ban. One Arabic speaker said people wouldn’t trust census employees “when they are continuously hearing a contradicting message from the media everyday threatening to deport immigrants.” The more Trump bullies immigrants, the more he silences them in the census.

The more Trump bullies immigrants, the more he silences them in the census.

Not that the census ever had a clear sense of how to count people from the Middle East. After September 11, 2001, people were astonished to learn that the federal government didn’t know how many Middle Easterners lived in America. There was a simple explanation: We hadn’t gone to war there recently. A group listed on the census is a group we’ve invaded or colonized. The census has check boxes for nine different subcategories of Asians, nearly every one representing a different war or territory: Japanese, Korean, Vietnamese, Filipino, Chinese, Hawaiian, Guamanian, Chamorro or Samoan. After 15 years of war in the Middle East, President Barack Obama and immigrant advocacy groups had proposed adding a “MENA” category for Middle East and North Africa for the 2020 census. (The census is prohibited from collecting religious information, so Muslims cannot be enumerated.) Counterintuitively, Trump, thanks to his budget cuts, has squashed the chance to count Middle Easterners in the 2020 Census. But if he continues US military involvement abroad, it is only a matter of time before, in what journalist Juan Gonzalez calls the “harvest of empire,” people from there are counted here.

While the question that Middle East advocates had sought may have been dropped, a new race question provides an effective but less contentious means to the same ends, since it will ask everyone where their ethnic origins lie. In another change for 2020, the census will ask whites and blacks to fill in their ethnic origins, like German, Irish, Norwegian, or African American, Jamaican, Ghanaian. Some have argued that it’s about time white Americans know the difficulty of answering the “Where are you really from?” question that people of color have long faced. But as sociologist Stephen Steinberg found, whites often adopt ethnic identities to reinforce their whiteness: It wasn’t accidental that Italian, Irish, and Scandinavian cultural festivals flourished in the 1970s as people of color were asserting their identities more publicly. White nationalists are all too proud to detail their European origins, no matter how irrelevant those may be to their daily lives. As it has always been with the census, the new ethnicity question promises revealing new data at the expense of shoehorning us into ill-fitting slots.

The real problem with Trump’s push to add citizenship questions, underfund the census, and produce an undercount is that it corrals the Census into producing the vision of America Trump already imagines. It weighs against us coming to terms with our racial past and defining the future we want. It ignores the changing identities of immigrants and the decreasing strength of identification with national origins.

The administration claims it wants an accurate count. But while Trump fantasizes that there are millions of noncitizen voters out there, who really gets counted twice and wins more representation? People with two homes. In 2010, the census counted 1.8 million white people who didn’t exist, and failed to count 1.6 million blacks and Latinos who really did. The Census Bureau later concluded that the over-counted white 1 percent were owners of vacation homes. Since census forms are sent to every house, people with a home on Pennsylvania Avenue and a second (or third) in Mar-a-Lago may be counted more than once. Inevitably, the very person who has done the most to threaten the accuracy of the 2020 census is the one who will count the most.