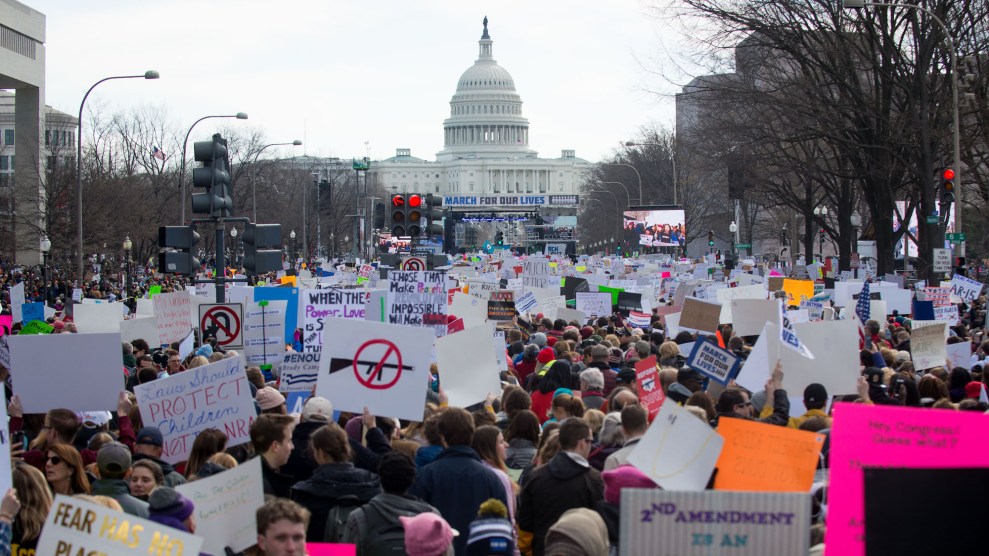 Thousands of protesters, many of them students, gather near the Capitol for the DC March For Our Lives rally on March 24, 2018.Erin Scott/ZUMA

For two months now, teenage activists have been leading a movement to vote out of office politicians who stand in the way of gun control. Sixteen- and 17-year-olds in the nation’s capital could soon have the opportunity to do just that. That’s because the DC city council is considering a new bill that would lower the district’s voting age for both local and federal elections. Should it pass, DC could become the first jurisdiction in the country to allow people under the age of 18 to vote for president.

DC council member Charles Allen introduced the Youth Vote Amendment Act of 2018 during the council’s legislative session on Tuesday. The bill would do away with the district’s pre-registration system, which currently allows 16- and 17-year-olds to register in advance for elections scheduled to take place after they turn 18. Instead, Allen’s legislation and would simply allow district residents to register on their 16th birthday and then vote in the next election.

The bill arrives amid the wave of youth activism that emerged after February’s school shooting in Parkland, Florida. Over the last eight weeks, teenagers across the country have organized school walkouts, marches, and town halls to demand tougher gun control measures—actions that have intensified calls from commentators to reward student political engagement with the right to vote. Allen says the current political environment has helped him make headway on the bill; a similar measure he introduced in 2015 failed to make it out of committee.

“The number one pushback I got two years ago was people saying, ‘How do I know, and how can you convince me, that a 16-year-old is mature enough, smart enough, engaged enough, to be entrusted with casting a ballot?'” says Allen. “For anyone who has been paying attention for the past few months, many young voices have completely eviscerated that argument.”

The youth leaders of the #NeverAgain movement have already shown support for Allen’s bill. Zion Kelly—a DC teen who, at last month’s March for Our Lives, shared the story of losing his twin brother to gun violence—asked his Twitter followers to the pressure council members to back the measure. Parkland survivor David Hogg urged his own 750,000 followers to do the same.

In DC we are one vote away from lowering the voting age to 16. We need one of these people to vote. @kenyanmcduffie @marycheh @CMBrandonTodd @VinceGrayWard7 @ChmnMendelson. Who is it going to be ! #youthvoicematters !

Pick a #1-5 and tweet at them. @marycheh please let the youth vote let's get young adults in politics asap so they can vote on the issues that effect them most. https://t.co/oznnNlB3tI

As I reported last week, research backs up Allen’s argument that high schoolers are prepared to make the complex political judgments voting requires. Moreover, experts say that lowering the voting age could be an effective means of promoting civic engagement as a lifelong habit:

Peter Levine, the former director of the Center for Information and Research on Civic Learning and Engagement, a research organization that focuses on youth democratic participation, also points to the fact that high school may be one of the best times to establish civic habits like voting—before the disorienting transition into early adulthood begins. “People are still in their context where they grew up, so they can make a transition to voting more easily,” he says. “Eighteen is arguably a really bad year to start because that’s when everybody’s lives are [being] disrupted.” That’s important, since one of the best predictors of whether someone will vote in an election is whether they did in the last one. In short: If someone doesn’t vote in their first election, it’s less likely they’ll build the lifelong routine.

Arguments for good habits aside, are teens really mature enough to responsibly wield voting powers? Yes, says James Youniss, a retired professor of psychology at Catholic University and co-author of a new book about youth civic engagement. He points to assessments showing that 16- and 17-year-olds know as much as 18-to-25-year-olds about government, and that the two age groups pay attention to news with similar frequency. As for those who worry about teens’ cognitive abilities, the two age groups also score similarly on tests of social studies and reading comprehension, and voting draws on the areas of the brain that are sufficiently mature to allow 16- and 17-year-olds to make civic decisions with the same sophistication as young adults.

But while the legislation would give more high school students a voice in electing city officials and the president, teenagers in the district would still be disenfranchised when it come to Congress. DC has no representation in the US Senate and only a non-voting delegate in the US House.

Moreover, the district’s unique status as the nation’s capital could both aid and hinder Allen’s efforts to lower the voting age. Though Congress used to have “exclusive jurisdiction” over the DC, the district gained home rule powers in 1973, allowing it to govern itself with an elected mayor and 13-member city council. That self-governance means it’s the only American city that doesn’t have to work with state officials to set election rules.

But the US Congress still retains the right to block any laws passed by the DC council, notes Joshua Douglas, a law professor at the University of Kentucky. It’s a power that federal lawmakers have attempted to use in recent years, on issues ranging from reproductive rights to marijuana legalization. And given that a number of conservatives have vocally opposed efforts to lower the voting age, there’s a chance congressional Republicans would try to block Allen’s bill. Allen says he isn’t worried about about a vote in Congress. “They can barely do that for their actual priorities,” he remarks.

The bill now moves heads to the council’s Committee on the Judiciary and Public Safety, which Allen chairs; Allen says the committee will hold a hearing on the subject later this year. He thinks the odds are in his favor this time around, and says he says passage would make district politics more responsive to the needs of the city’s youth.