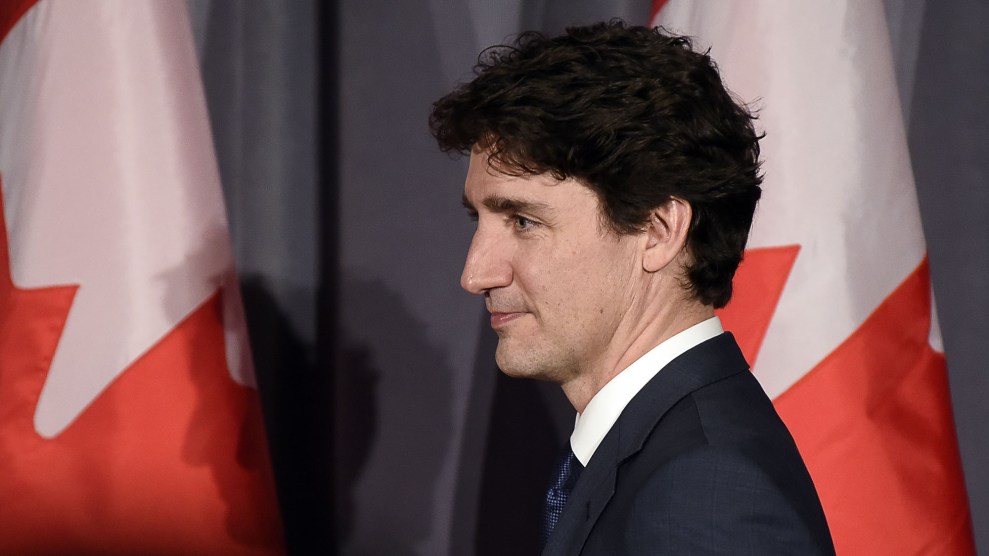 This story was originally published by National Observer and appears here as part of the Climate Desk collaboration.

Texas-based energy giant Kinder Morgan is appealing to Ottawa to take “preemptive action” to force British Columbia to stand down in its intent to oppose the building of a major oil pipeline.

The multinational energy company behind the Trans Mountain expansion project announced on Sunday that it was suspending all non-essential spending on the expansion, and gave a deadline of May 31 before it walks away.

That decision came a day after a protest by Indigenous leaders and environmental activists resulted in a suspension of activities. Close to 200 people have been arrested at a Kinder Morgan terminal in Burnaby, BC.

In a conference call with financial outlets Monday morning, Kinder Morgan said it was up to Prime Minister Justin Trudeau’s government to break the impasse created by BC. Premier John Horgan’s NDP government, which has pledged to use all legal tools available to block the pipeline.

“We are at a point where our spending would need to increase significantly, in order to get full construction activity,” said Kinder Morgan’s chairman and chief executive officer Steve Kean.

“Full construction would reach $200-$300 million a month. That level is unsupportable unless we are confident that we can finish what we start.”

“The need for certainty becomes acute at this stage. Full construction would reach $200-$300 million a month. That level is unsupportable unless we are confident that we can finish what we start.”

The BC premier is pursuing a reference case in the courts to determine if his government can control the shipment of oil through the province on environmental grounds.

Kean said BC has taken advantage of its “shared jurisdiction” with the federal government in certain areas to oppose the pipeline. “There is considerable power behind a federally-approved undertaking, particularly a pipeline project, which is what this is. But it’s not exclusive,” said Kean.

The firm is now looking for “final clarity,” he said, in the form of “some kind of preemptive action” from Ottawa that stops BC from wielding its jurisdictional authority “and reaffirms the project’s entitlement to proceed.”

This isn’t the first time Kinder Morgan has warned about the termination of the Trans Mountain project. In October, it filed legal papers with the National Energy Board warning that it was facing massive losses and a potential project failure due to delays in getting municipal and provincial permits. However, Kean had told investors, at that time, that the company was making progress with the BC government, getting hundreds of permits out of about 1,000 required to proceed with construction.

“I think the other message there… is that, you know, the bureaucracies and the statutory authorities of BC have continued to do their work,” Kean said, during an amicable Oct. 18 conference call with investors. “We don’t yet see any evidence of any political interference.”

Clayton Thomas-Müller, a Mathias Colomb Cree Nation member from Manitoba and campaigner with environmental group 350.org, said in a message posted on Twitter on Monday that Kinder Morgan’s maneuvers were designed to push Trudeau, Natural Resources Minister Jim Carr and Alberta Premier Rachel Notley “to do their dirty work.”

The company’s announcement Sunday garnered swift condemnation of Horgan by Notley’s NDP government in Alberta, where the premier threatened new legislation to punish BC and said she would consider investing public funds to take a new ownership stake in the Trans Mountain project.

“They’ve been using a lot of carrots with the BC government. At a certain point, maybe the stick ought to come into play.”

“You can speculate as to the kinds of options that the federal government has. They’ve been using a lot of carrots with the BC government. At a certain point, maybe the stick ought to come into play,” she told reporters Sunday.

Federal Minister Carr, who gave a separate statement April 8 on Parliament Hill in Ottawa, said the prime minister has made it clear that the federal government is looking at “all options” to get the pipeline built.

“This is no time for any provincial government to be reckless with the financial well-being of Canadians and for the fabric of the federation itself,” Carr said on Parliament Hill.

His boss, Prime Minister Justin Trudeau, made it clear in an interview with National Observer that he was confident his approval of the pipeline expansion will withstand legal challenges.

Horgan, however, has been undeterred by the pressure, saying in his own statement Sunday that “we will always stand up for British Columbians, our environment and the thousands of jobs that depend on our coast.”

Kean said Kinder Morgan was open to discussing Alberta’s potential investment in the pipeline if there’s clear assurance that the project can actually be completed.

“There have been some discussions. I’m not really in a position where we can talk about those specifically… Let’s be clear on that,” he said. “There’s no magic formulation that’s been articulated by anyone, to us. This is what we’ll be devoting some attention to in the coming weeks.”

As a private-sector company, Kinder Morgan can’t dictate what governments do or establish the timing but it can take actions to protect its shareholders, Kean said.