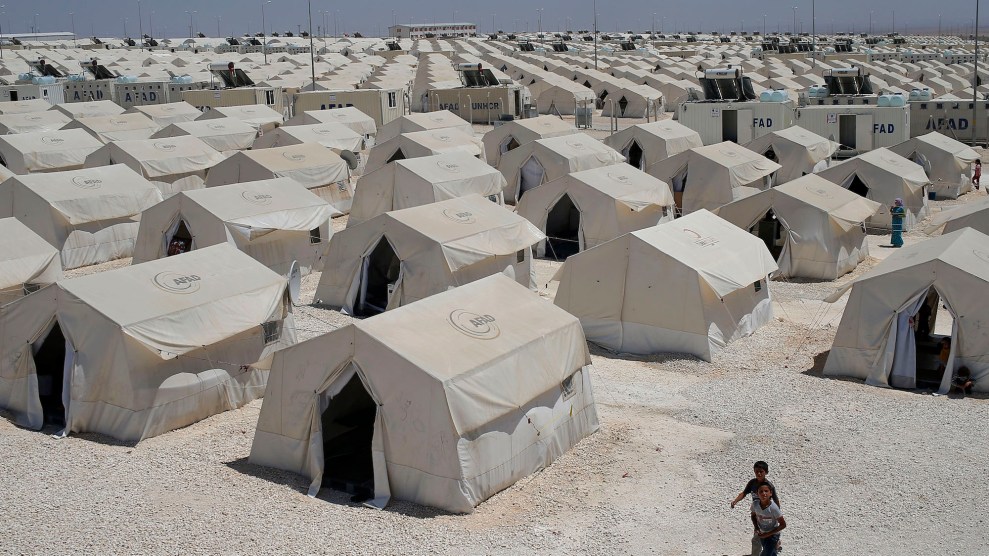 Syrian refugees in a refugee camp on the Turkey-Syria border in 2015.Emrah Gurel/AP

Only 11 Syrian refugees have been admitted to the United States this year, down from more than 2,400 during the same period in 2017, even though Syria remains convulsed by a civil war that reached another crisis point this month when President Bashar al-Assad’s regime appeared to attack the city of Douma with chemical weapons. On Sunday, Fox News’ Chris Wallace asked US Ambassador to the United Nations Nikki Haley, “On humanitarian grounds, how do you justify that?” Instead of citing President Donald Trump’s usual concerns about terrorism, Haley suggested that the Syrian refugees she’s spoken with don’t actually want to come to the United States.

“Not one of the many that I talked to ever said we want to go to America,” she said, two days after the United States and allies launched missile strikes in retaliation for the chemical attack. “They want to stay as close to Syria as they can.”

Haley’s comment overlooks the fact that the Trump administration has made it nearly impossible for Syrian refugees to come to the United States, even as the Syrian civil war has created what Filippo Grandi, the United Nations High Commissioner for Refugees (UNHCR), called the “biggest displacement crisis of a generation.” The number of Syrian refugees moving to countries like Sweden and the United Kingdom increased last year, while the number arriving in the United States fell by around 80 percent between 2016 and 2017.

Christopher Boian, a spokesperson for the UNHCR, agrees with Haley that refugees would prefer to stay close to their homes and eventually return, saying, “Nobody wants to become a refugee.” But he adds, “For many years, the numbers of people in need of resettlement to a third country have far outstripped the numbers of places made available by governments around the world.”

Kay Bellor, a vice president at the Lutheran Immigration and Refugee Service, says it is “not news” is that refugees would prefer to go home. The question, she says, is whether Syrians who know they can’t safely return home want to resettle outside the region. “Given [that] thousands of Syrian refugees have registered with UNHCR to do just that, it sort of gives the lie to the notion that Syrians are not seeking safety as an alternative to tenuous and vulnerable existences as refugees in host countries in the region,” she says.

Noah Gottschalk, a senior policy adviser at Oxfam America, the US arm of the international humanitarian organization, says that “using the understandable longing that refugees have for home” as a justification for cutting refugee admissions is “completely irresponsible.” Limits on refugee admissions by countries around the world severely restrict refugees’ ability to find new homes in safe territory: Less than 1 percent of refugees are eventually able to permanently resettle in “third countries” like the United States or Canada. The number of Syrians whom the UNHCR helped resettle in a third country fell from about 48,000 in 2016 to 30,000 last year, with the drop in admissions to the United States accounting for about two-thirds of the decline.

“Using the understandable longing that refugees have for home” to cut refugee admissions is “completely irresponsible,” says a senior adviser at Oxfam America.

Haley’s suggestion that Syrians simply don’t want to come to the United States contrasts with Trump and Vice President Mike Pence’s record of blocking Syrian refugees outright. As governor of Indiana, Pence unsuccessfully tried to block Syrian refugees from resettling in his state. He claimed that he wasn’t discriminating against Syrians based on their nationality, but only because he believed they posed a threat to public safety. Richard Posner, then a federal judge, rejected Pence’s convoluted argument, writing that it was the equivalent of Pence saying “that he wants to forbid black people to settle in Indiana not because they’re black but because he’s afraid of them.” He added, “But that of course would be racial discrimination, just as his targeting Syrian refugees is discrimination on the basis of nationality.” One of Trump’s first actions as president was to indefinitely ban all Syrian refugees.

In late January, the Trump administration announced that it would resume refugee admissions from 11 mostly Muslim-majority nations, including Syria, after effectively blocking refugees from those countries in late October. “The big picture is that there is no longer a refugee pause on countries, including the 11 high-risk countries, with these measures taking effect,” a senior administration official told reporters at the time. About 120 refugees have been admitted from those countries since then, compared to more than 3,700 during the same period of 2017, according to data from the State Department’s Refugee Processing Center.

There are more than 5.6 million Syrian refugees, including about 450,000 who are living in refugee camps. Defense Secretary James Mattis told the House Armed Services Committee last week, “I’ve seen refugees from Asia to Europe, Kosovo to Africa. I’ve never seen refugees as traumatized as coming out of Syria. It’s got to end.”

The Trump administration argues that it’s far cheaper to resettle refugees near their countries of origin. At the same time, Gottschalk points out, the administration has unsuccessfully pushed for steep cuts to funding for programs that provide food, water, and educational opportunities to refugees living in their home regions. “They can’t have it both ways,” he says. The vast majority of Syrian refugees are living in Jordan, Lebanon, and Turkey. Boian says that it is “absolutely imperative” for the world to support those countries.

In September, the administration cut the annual limit on the number of refugees from around the world who can come to 45,000, the lowest level on record and less than half the 110,000-refugee limit at the end of the Obama administration. But the Trump administration will likely let in far fewer refugees even than that: It’s on track to admit about half of the refugees allowed under the reduced cap.

David Miliband, the former British foreign secretary and current president of the International Rescue Committee, wrote in the Washington Post on Monday that scholars often wonder whether the Trump administration is “malevolent or incompetent.” He argued that the answer is clear when it come to the refugee program. “There is animus towards this program and that is being translated into action in a highly organized and efficient manner,” Miliband wrote. “It is the worst of all worlds.”

Boian says the debate about admitting refugees boils down to a basic human question. “What are you going to do when you’re faced with a person running for his or her life [who] shows up at your door?” he asks. “Do you help them or do you turn them away?”