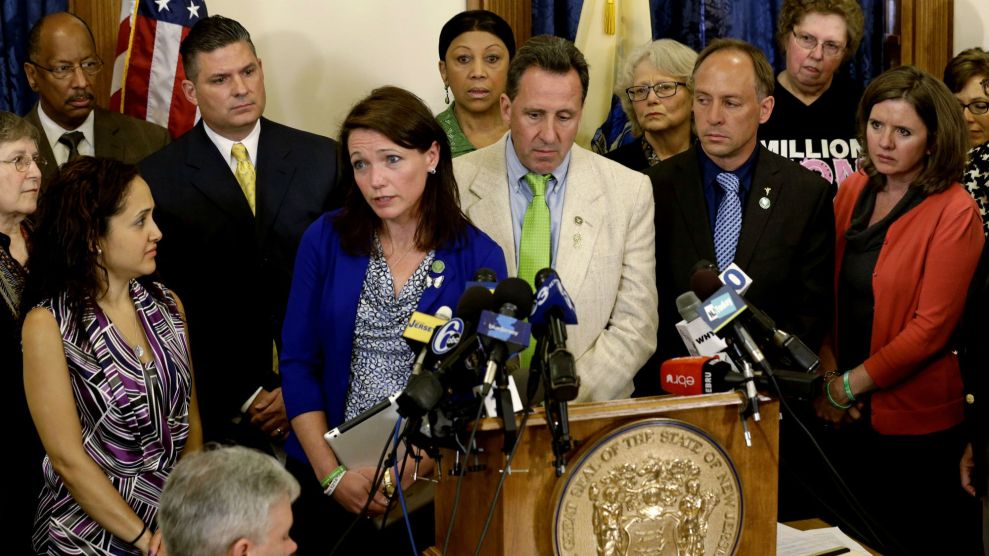 For weeks, western Connecticut residents and national Democrats have been watching and waiting, speculating which of the two parents who lost their sons in the 2012 shooting at Sandy Hook Elementary School in Newtown, Connecticut, would run for Congress. Now they have an answer: Neither.

The Democratic Congressional Campaign Committee reached out to both Mark Barden and Nicole Hockley earlier this month after Rep. Elizabeth Esty announced she would not seek reelection. Esty’s decision followed reports that she had continued employing her chief of staff after learning of allegations that he had threatened a former staffer’s life.

In the intervening weeks, as they tried to decide whether one of them would seek the seat—as best friends, they agreed only one of them would run—Barden and Hockley met with lawmakers in Connecticut and Washington at the DCCC’s behest. They both currently work at Sandy Hook Promise, a grassroots advocacy organization they launched in the wake of their children’s murders that trains educators, students, and parents to identify the signs of potential school violence and intervene before it occurs. As Mother Jones reported last week, high-profile Democrats like House Minority Leader Nancy Pelosi, Connecticut Sen. Chris Murphy, and Esty offered encouragement and guidance to Barden and Hockley.

The two potential contenders announced that neither of them would in fact run on Friday through a press release on the Sandy Hook Promise website. They say they wish to remain involved with their advocacy work, which they say has has measurable impact since the organization’s founding five years ago:

[W]e are not ready to leave Sandy Hook Promise, which we launched as part of [Barden’s son] Daniel and [Hockley’s son] Dylan’s enduring legacy, and has become a national leader in the school safety and gun violence prevention movement. Through Sandy Hook Promise we know what we have built has already saved countless lives, and is still growing and impacting more communities at a remarkable rate. We started this journey together, and right now, we feel we can have more of an impact by seeing just how far we can go together.

Earlier this month, when Mother Jones spoke with Hockley about how she and Barden were weighing the decision, she argued that the political route toward achieving gun control might prove less effective than the tactics Sandy Hook Promise employs, which has successfully brought people from all political backgrounds together on the subject of school safety. As I recently wrote:

The organization’s success, Hockley says, stems in large part from the way it prioritizes education and coalition-building over lobbying. The group has trained more than 3.5 million people to prevent school violence and is operating in more than 7,000 schools in all 50 states. “What we do is teach people about gun violence in a non-polarizing way,” she explains. “If you go in on the policy element only, people take sides too quickly. We go in on that middle ground—you don’t even really have to talk about guns to do that.”

In their announcement Friday, they also cite a desire to stay close to their surviving children, who are navigating their high school years. “We know all too well how precious and short time with family can be,” they write.

None of the Connecticut congressional races had been seen as competitive until Esty’s seat abruptly became up for grabs. The Cook Political Report changed the race rating from “Solid Democratic” to “Likely Democratic” following reports that the three-term congresswoman would not run again. Three Democrats and three Republicans are currently in the race for the seat.