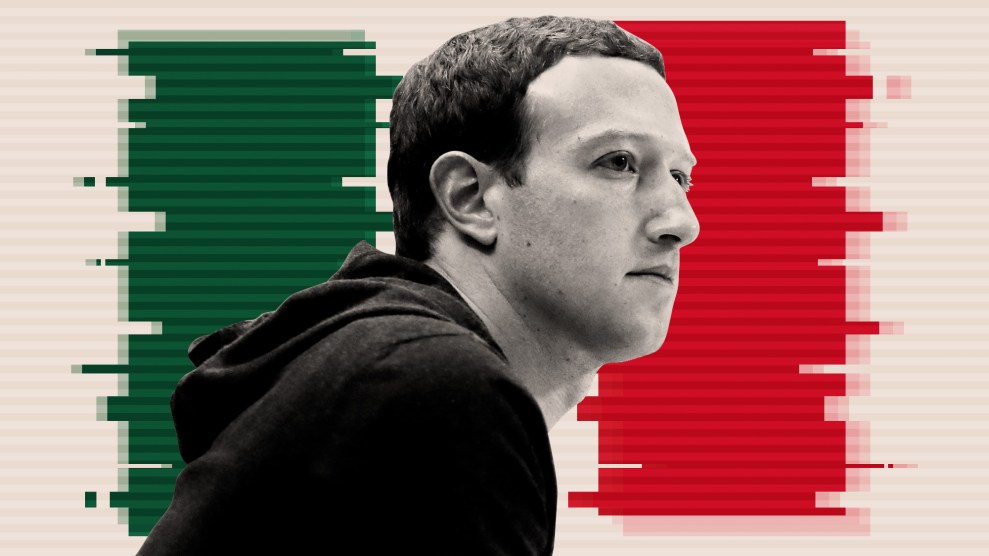 After a covert Russian operation to fuel political divisions in the United States reached 146 million Facebook users in 2016, the company vowed to do more to stop fake news and propaganda in the lead-up to this November’s midterm elections. But a propaganda campaign underway in the Mexican presidential election is showing how easy it still is for unknown actors to use social media platforms to covertly influence elections.

Four websites in Mexico are using Facebook and Twitter to mount what appear to be coordinated attacks on Andrés Manuel López Obrador, the left-wing candidate who is leading in the polls ahead of the country’s July 1 election. Three of them are designed to look like traditional news sites; the fourth is a transparently anti-López Obrador page that claims the founders of López Obrador’s political party want to install a totalitarian regime in Mexico. It’s unclear who’s behind the sites—it could be foreign actors, special interests, or political campaigns themselves.

Facebook CEO Mark Zuckerberg will testify before Congress on Tuesday and Wednesday and seek to reassure the American public that the company is working to stem the proliferation of political propaganda. But in the case of these four anonymous sites in Mexico, Facebook says they’re not violating its policies, and it seems to have no intention of stopping them or other sites that mount coordinated political attacks under the guise of news.

Together, the four sites have more than 250,000 Facebook followers, plus another 35,000 on Twitter. Their content is not fake news in the vein of the 2016 story announcing falsely that the pope had endorsed President Donald Trump, which spread like wildfire on social media. It’s more like Breitbart News articles attacking Democrats and painting Trump in the most flattering light. The difference is that Breitbart and its biases are well known, whereas these sites provide no information about who writes their content and were set up just months before the election but are designed to look like news outlets.

A Mexican Facebook user scrolling through her feed in search of political news might encounter what appears to be a news report from El Mexicano Digital, one of the four sites, that says López Obrador and the late Venezuelan strongman Hugo Chávez share “terrifying similarities.” Then, after seeing posts from established newspapers like La Jornada that look similar, she might come across a story from Cielo e Infierno (Heaven and Hell), the Facebook page for another of the four sites, Morena.mx, that refers to an old interview in which López Obrador said he had high blood pressure and claims ominously in a headline, “López Obrador Is Sick.”

Mother Jones has found distinct links among the four sites, suggesting they were created by the same person or people. Three of them registered with the same company within seconds of each other in December. The fourth was registered earlier, but it operates on the same servers as the other three, shares a Google Analytics account with them, and uses similar source code.

A Facebook representative tells Mother Jones that all the sites comply with the company’s policies. The representative declined to disclose whether the sites pay Facebook to promote their content in users’ news feeds, but says Facebook would allow them to do so.

No one knows who’s behind the sites—it could be foreign actors, special interests, or political campaigns themselves.

In January, Zuckerberg touted the company’s effort to promote “high quality news” in order to prevent “sensationalism, misinformation, and polarization.” But Siva Vaidhyanathan, director of the University of Virginia’s Center for Media and Citizenship, believes Facebook’s problem with misleading news posts is essentially unsolvable in a society that protect people’s right to free speech. “There’s no way to regulate content discrimination in the United States of America,” he says. “That just won’t pass First Amendment muster. That’s just never going to happen.”

The ability to create anonymous websites posing as legitimate news outlets is, of course, not new. What’s changed is that these sites can reach hundreds of thousands of people on Facebook, sometimes by paying the company to promote its posts. There appears to be little to stop any special interest in the United States—or a malicious foreign actor—from creating a group of phony news outlets and then paying to push coordinated messages to large numbers of unsuspecting readers.

Facebook is taking some steps to increase transparency before the midterm elections in the United States. The Facebook spokesperson says the company is planning to identify to users all the messages a particular page is paying to promote. The company also intends to tell users who is funding political ads, including issue ads that don’t mention a specific candidate, in the United States. Facebook announced on Friday that it will require pages with “large numbers of followers” to be authenticated, but it did not say what will be considered a large page or provide additional details about the authentication process.

After losing a disputed election in 2006 and coming in second again in 2012, López Obrador and his party, the National Regeneration Movement (known by its Spanish abbreviation Morena), are now the favorite to unseat the centrist Institutional Revolutionary Party (PRI), which has ruled Mexico for all but 12 years since 1929. Ricardo Anaya from the right-leaning National Action Party (PAN) is in second in the polls. José Antonio Meade, the PRI candidate, is currently in third.

The four sites have dramatically expanded their reach in recent months. El Mexicano Digital had 18 Twitter followers in early January but now has more than 10,000. Some of its Facebook posts receive as many as 40,000 likes and other reactions, while many others receive only a handful, suggesting that the site may be paying Facebook, or an outside actor, to promote certain posts. Morena.mx’s Facebook videos have been viewed more than 8 million times, and some of its posts that read like press releases receive thousands of likes.

Morena.mx is the most transparently biased site: It has featured an image of López Obrador with blood dripping from his mouth. The other three sites appear more like independent news outlets, but they’re similarly critical of López Obrador. El Zócalo de México claims to offer a “deep” look at Mexican news. Pinche Hemeroteca, roughly “Fucking Archive,” claims that it exposes Mexican politicians’ “lies” and “incoherent positions.” El Mexicano Digital provides no information about itself but has reportedly paid Google to promote its stories when people search for López Obrador. A spokesperson for Google declined to comment.

The Consejo de la Comunicación’s president, Federico López Otegui, said last year that his organization would not be backing a candidate in the 2018 election, and Núñez says that’s still the case. The organization reportedly opposed López Obrador when he ran for president in 2006. Raúl Benítez Manaut, a professor of North American security issues at the National Autonomous University of Mexico (UNAM), one of Mexico’s leading universities, says he would not be surprised if the Consejo de la Comunicación were opposing López Obrador behind the scenes. “The rich people in Mexico are really worried,” he says, noting proposals López Obrador has made that have concerned the business community. “And a big part of the middle class is really worried with [López Obrador] and they will try to stop him.”

Last month, a group of 60 media outlets, civil society groups, and universities in Mexico launched a project called “Verificado 2018” to fact-check stories in the lead-up to the Mexican election. Google, Facebook, and Twitter are part of the effort. Facebook also took out full-page ads titled “Tips to Detect Fake News” in major Mexican newspapers last month. But the company’s efforts to promote reliable news outlets may be undermined by less trustworthy pages’ ability to stay within Facebook guidelines and purchase ads to spread propaganda.

Twitter bots and trolls have often been seen as the main tool for manipulating Mexican voters through social media. Andrés Sepúlveda, a Colombian hacker, told Bloomberg Businessweek in 2016 that he received $600,000 to promote current Mexican President Enrique Peña Nieto and intercept his opponents’ communications in the 2012 election. As part of that effort, he said, he had a network of 30,000 Twitter bots at his disposal.

A Twitter spokesperson told Mother Jones that the company was working to educate voters and parties “on best practices to inform, consume, and debate electoral information on Twitter.” The spokesperson added that Twitter is “thinking of working with” INE to recommend lists of accounts to follow, publish data on what users are discussing, and create election-related emoji.

Sergio José Gutiérrez, a leading digital strategist for Mexican politicians, recently told the Spanish newspaper El País that there’s been a shift away from Twitter in 2018. “Parties have discovered more effective tactics,” he said, “such as generating fake news and publicity articles on supposed news sites that they sell to the highest bidder.” El Mexicano Digital and its likely affiliates appear to be part of that shift.

Esteban Illades, a Mexican writer who recently published a book on fake news, is skeptical about how much these misinformation campaigns will influence Mexican voters, who already have strong opinions about López Obrador. More significant may be the precedent they set for would-be propagandists in other political campaigns, like the US midterms, who will see that Facebook is doing nothing to stop these efforts.

Vaidhyanathan says Facebook’s struggles to promote high-quality news are likely to continue. “As long as Facebook is this big and Facebook behaves like Facebook, we’re kind of in for dark times,” he says, adding, “There’s nothing Facebook can do about it, frankly—unless it wants to completely alter what it is and what it does.”

This story has been updated to include a response from the Consejo de la Comunicación and to note that the content of Méxic-on was deleted after this article was published.