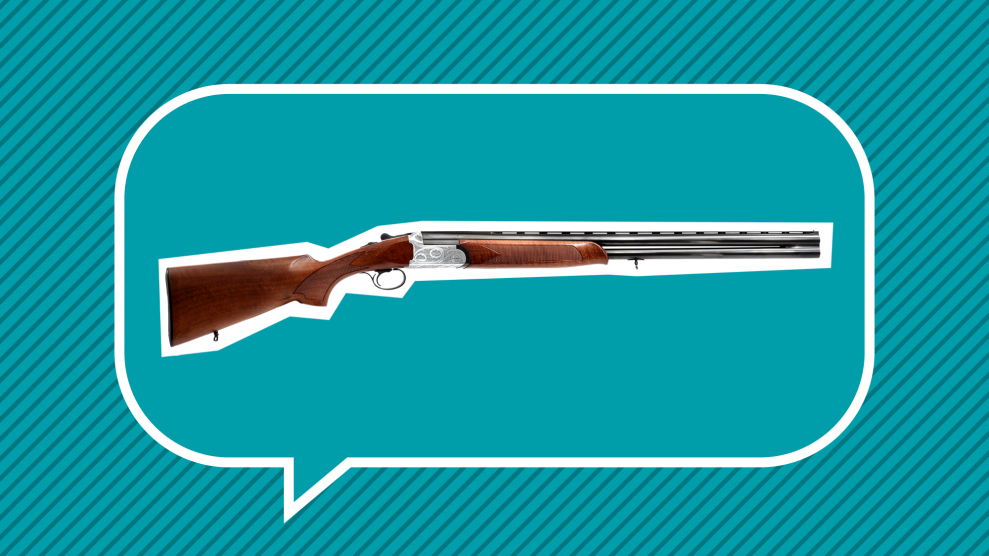 I remember clearly the first time my father said this to me in the living room of our Tennessee home, where we always had important “family talks”—his jaw was set, and his eyes searched mine for a promise to heed his warning before he fixed my sister with a similar gaze. I was 15 years old, my sister was 14. In the years after, he would repeat the refrain over and over, quizzing us at random so he could hear us say the words and feel assured that we would be safe.

I’ve always regarded my father as a serious man. He has a heart of gold and a howling laugh, but when I lived under his roof, I also knew him to be someone who was not to be challenged. He is also deeply thoughtful—the kind of person who is constantly thinking through his perceptions of the world around him and the potential consequences of his actions, so it should not have surprised me to discover that guns did not simply appear in our home.

If you grow up in the rural South, gun culture feels very entrenched in the regional identity. A lot of my classmates were dedicated hunters; I remember a boy who was suspended because he drove to school with his guns still in the back of his truck—he simply forgot, he said, to put them away after a hunting trip. One of my uncles used to keep a gun around to shoot at the armadillos that came out at night to upset his cows. A great-aunt of mine was notorious for calling her dog in for supper by firing a shot off her back porch in the middle-of-nowhere, Mississippi. Guns have also represented a family legacy for us in some ways—when my grandmother’s father’s pistol (affectionately known as Big Daddy) was passed between my uncle and my father, it seemed to carry an emotional weight for them that I don’t see often. I found myself feeling a strange reverence toward it as well, like it was some long-lost familial talisman that binds me to a generation I never got to meet, but I’ve heard stories of all my life.

That said, my father didn’t have a real conversation with us until we were teenagers, when he decided it was safe to have guns in our home. When I told him I was writing this, he said that he waited until we were mature enough to fully understand the stakes. “Even if you’re sure the gun is not loaded, treat it like it is anyway,” he would say. My father is ex-military; when he issues an order, you follow it. We were never to touch a gun without him present (they were locked away in a safe anyhow) and we were never, ever to point a gun at anything other than the ground or a target on the range (or, once, a piece of sheetrock in someone’s backyard, because why would you pass that up?).

At the time of that first conversation, I was kind of a pain in the ass. My teenage self was angry, headstrong, and terrified of joining the ranks of those in her tiny town that never, ever left. I was worried about things like my grades, band practice, my relationship with my high school boyfriend. I had a lot of stupid fights with my dad that I’m horrified by now, but somehow, guns presented an opportunity for us to do something together that didn’t end in conflict. We cleaned our guns together, went to the range and gun shows on weekends, and even restored an old World War II Carbine rifle as a project.

I feel grateful now that my father always spoke to me frankly and carefully about guns and the kind of damage that can be wrought by people who are irresponsible and do not respect the power behind their weapons. But I honestly never really gave a second thought to real gun violence or the possibility of a school shooting. When I was a little girl, he used to warn me about two-legged monsters; it’s really only now as an adult that I know two-legged monsters are all too real—and some of them wield firearms.

Now, I am still young enough to recall these conversations with my father, but also old enough to be able to imagine trying to have these discussions with a child of my own, should I decide to have one someday. A few weeks ago, I was at a neighborhood bar in San Francisco, catching up with other female journalists, several of whom have children. The topic turned to having the “sex talk” with kids, and then someone brought up a consequence of life in post-Parkland America as needing to have the guns talk, too: specifically, what to do in the event of a school shooting. I was struck by that idea: taking the gun talk one step further by teaching kids how to react if a shooter were to enter their classroom. Of all the ways my father talked to me and my sister about firearms, that possibility never entered our discourse. It made me reflect more on his position as a gun owner and a parent, and it made me wonder how other families talk about guns across the country.

We want to hear from you

How is your family talking about guns? Are you a parent struggling to find the words for your children, or are you a teenager or a kid on the receiving end of it? Tell us how these conversations are shaping up in your home.