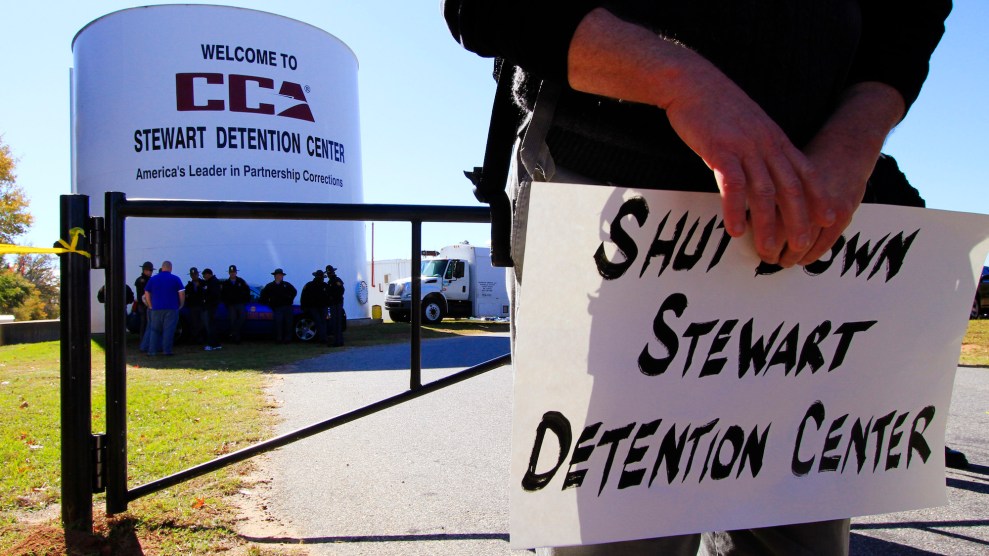 The Stewart Detention Center in rural Georgia has been called “the black hole of America’s immigration system” for overusing solitary confinement, cutting corners on mental health care, and deporting asylum seekers at extraordinary rates. Now it can add one more alleged human rights violation to the list: According to a complaint filed in federal court Tuesday, the private-prison company that operates the facility forced detainees to virtually run their own jail for little pay—using threats and depriving them of basic toiletries to do so.

The case is the latest in a series of class-action lawsuits that have targeted the labor practices of billion-dollar prison corporations—CoreCivic, in Stewart’s case—claiming that they rely on “voluntary work programs” that pay as little as $1 per day to maintain profit margins in immigration detention facilities across the country.

Immigration and Customs Enforcement (ICE) incarcerates nearly 2,000 detainees at Stewart each night, and many remain there for months while they fight immigration court cases. The lawsuit alleges that detainees were effectively forced to clean bathrooms, prepare meals, strip and wax floors, perform clerical work, and wash laundry—”work that directly contributes to institutional operations”—for cents on the hour. The lawsuit lays out CoreCivic’s payment scheme for so-called “voluntary” detainee workers: between $1 and $4 a day for most people, while those who worked more than eight hours a day or seven days a week could make up to $8 per day.

Voluntary work programs are authorized by the federal government and are a common practice at immigration detention centers, but the new lawsuit contends that Stewart’s program is not truly voluntary. It alleges that CoreCivic officers threatened to reassign detainees to crowded, dirty housing areas if they refused to work, and even put one detainee in solitary confinement for “threatening a work stoppage after he had not been paid.” The suit also alleges that Stewart detainees sometimes aren’t provided items like toilet paper, soap, toothpaste, and lotion and instead must buy them from CoreCivic’s commissary—often using payment earned in the work program.

“All work programs at our ICE detention facilities are completely voluntary and operated in full compliance with ICE standards,” CoreCivic spokesman Jonathan Burns said in a statement. He declined to comment on the pending lawsuit.

The complaint filed Tuesday is the work of Andrew Free, a Nashville-based immigration attorney who has turned a spotlight on the cash flow and labor practices of the country’s most powerful private prison companies, as well as team of lawyers including some from the Southern Poverty Law Center and progressive activist group Project South.

Free filed his first forced-labor lawsuit in 2014, when detained immigrants at the Denver Contract Detention Facility in Aurora, Colorado, sued the GEO Group over both unpaid labor and the $1-per-day “volunteer work program.” At Aurora, it was written into the detainee handbook that people could be punished with solitary confinement if they refused to work on mandatory housekeeping crews, while those who opted into Aurora’s voluntary work program made just $1 for up to eight hours of work. Free, along with lawyers from a handful of firms, argued that GEO had violated the Trafficking Victims Protection Act, a modern anti-slavery law, and “unjustly enriched” the private prison company—the same claims now being leveled against CoreCivic over the work program at Stewart.

“Without this nearly free labor, CoreCivic’s windfall from immigrant detention would be substantially decreased.”

In February 2017, the Aurora lawsuit became the most successful detainee labor case so far when a judge, and later a federal appeals court, allowed it to proceed as a class action with more than 50,000 members. Since then, a cascade of lawsuits modeled on the Aurora strategy has targeted many of the country’s largest immigrant detention centers, while their for-profit operators have uniformly disputed the claims. Washington state’s attorney general sued GEO last fall for allegedly paying detainees either $1 per day or with “chicken, potato chips, soda, and/or candy” in exchange for work at the 1,575-bed Northwest Detention Center. In Texas, a now-released detainee named Martha Gonzalez filed a class-action lawsuit against CoreCivic over multiple facilities she called “forced labor camps,” including the Laredo Detention Center and the female-only T. Don Hutto Residential Center. Two California locations are also under fire: GEO-run Adelanto, a notorious 1,940-bed facility in the Mojave Desert, and CoreCivic’s Otay Mesa, which holds around 1,000 men south of San Diego. (Free is representing the Adelanto detainees; he’s also filed separate forced-labor cases at Northwest and Otay Mesa.)

The lawsuits aren’t coy about their goal to undermine the for-profit model of immigration detention. “Without this nearly free labor, CoreCivic’s windfall from immigrant detention would be substantially decreased,” the Stewart complaint alleges, arguing that CoreCivic, which makes nearly a quarter of its revenue from ICE, used the voluntary work program to avoid minimum wages, benefits, payroll taxes, as well as the potential costs of unionization and employee whistleblowers. Those hypothetical savings are substantial. As I reported last year, during a single month in 2012, the voluntary work program at Aurora saved GEO a minimum of $125,000 in wages, while its use of unpaid, mandatory housekeeping crews allowed it to hire just one janitor.

Federal authorities are starting to take notice of the issue. In December, the US Commission on Civil Rights demanded that Congress and the Department of Homeland Security investigate labor practices at ICE detention facilities in response to the allegations raised in the lawsuits. Eighteen Republican congressmen sent a letter to top officials at ICE and the Justice and Labor departments last month, arguing that paying detainees more than $1 per day for work would provide them an “unnecessary windfall” and urging the federal agencies to intervene in the lawsuits and clarify that detainees can’t be considered “employees.”

Meanwhile, detainees at Stewart and beyond are left working long hours in order to pay for necessities. Among them is Shoaib Ahmed, a Bangladeshi plaintiff in the lawsuit, who allegedly worked in the detention center’s kitchen for $4 per day and ultimately stopped fighting his asylum case in order to escape harsh conditions at Stewart. To detain Ahmed, ICE paid CoreCivic $62.03 per day.

“CoreCivic is exploiting the labor of detained immigrants to enrich itself,” said Azadeh Shahshahani, legal director for Project South. “It must be stopped.”