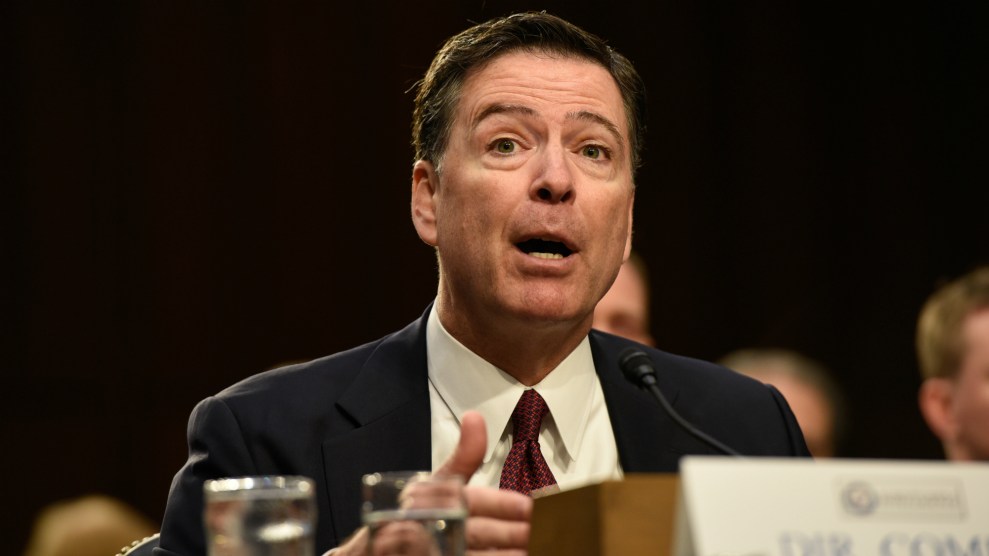 Former FBI Director James Comey brushed off a question about possible Trump campaign collusion with Russia in his much-anticipated interview with George Stephanopoulos. He argued that the big question here is not about “collusion,” exactly, but whether Americans conspired, aided, or abetted Russian interference efforts.

Here’s the crucial part of the ABC transcript:

GEORGE STEPHANOPOULOS: While this is all going on in July of 2016, the FBI also opens an investigation into the Trump campaign. Why?

JAMES COMEY: Well– to be more clear, we opened an investigation into whether there were any Americans associated in any way with the Trump campaign who were working with Russia as part of Russia’s effort to influence our election. And so in late July, the FBI got information that there was somebody who had had– was a foreign policy advisor named Papadopoulos to the Trump campaign.

JAMES COMEY: Right, who had been talking to someone in London about getting dirt that the Russians had on Hillary Clinton as part of their effort to influence our campaign– the– our election. And the reason that was important was that was long before the– there was any public indication that the Russians had material they were going to dump, which they started dumping in mid-June.

JAnd so we opened, our counterintelligence division, in late July, an investigation to try and figure out– we know the Russians are trying to mess with our election. Are any Americans working with them, trying to help them?

GEORGE STEPHANOPOULOS: You also had had your eye on Carter Page, who had also been working with the Trump campaign.

GEORGE STEPHANOPOULOS: And what was your concern there?

JAMES COMEY: Similarly, trying to figure out is he in any way coordinating with the Russians, as part of their effort to influence our– our election? We hear the word “collusion” all the time. “Collusion” is not a word that’s familiar to me from my work. The question is, is anybody conspiring or aiding and abetting, helping, the Russians accomplish their goal of interfering in the American election? That’s what the counterintelligence investigation was about.

It’s also important that in this exchange, Comey says that the FBI’s investigation into contacts between the Trump campaign and Russia started in July, following reports that Trump foreign policy aide George Papadopoulos had been told that the Russians had dirt on Hillary Clinton. This again debunks a popular right-wing talking point that the infamous Steele dossier served as the foundation of the FBI investigation.