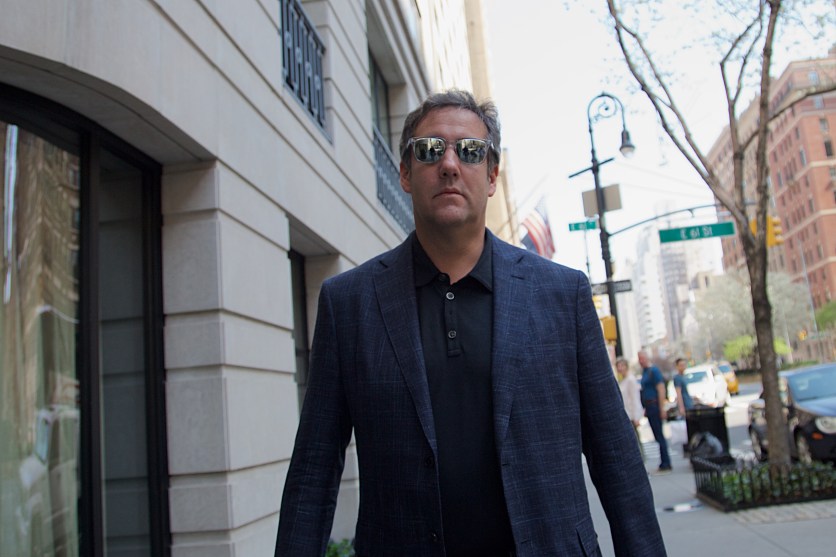 Cohen finds himself at the intersection of two related lines of investigation, one into the Trump campaign’s suspected coordination with Russia, and the other into Trump allies’ alleged payoffs to people who claimed knowledge of Trump’s infidelities.

Cohen’s perilous situation came into further light on Friday when McClatchy cited two sources who say special counsel Robert Mueller has “found evidence that Cohen secretly made a late-summer trip to Prague during the 2016 presidential campaign.”

On Saturday, Cohen disputed the report. But if Cohen did make such a trip, it would be in line with a meeting originally described in the so-called Steele dossier, a series of raw intelligence reports written in 2016 by former British intelligence agent Christopher Steele. The dispatches record claims by Russian sources that Cohen met in Prague in August 2016 with Kremlin officials as part of Cohen’s purported role “in a cover up…to prevent the full details of Trump’s relationship with Russia being exposed.” Since publication of the dossier, Cohen has vociferously denied that he traveled to Prague, even suing BuzzFeed for publishing Steele’s reports. “I have never been to Prague,” Cohen reiterated in a Saturday appearance on CNN.

The disclosures raise the prospect that Cohen may have cut other deals to bury salacious claims about Trump.

Proof of Cohen’s presence in Prague would amount to the strongest evidence yet that the Trump campaign colluded with Russia to help Trump win the 2016 election. But apart from the travel allegation, the McClatchy report highlights how integrated Cohen was with Trump’s affairs, and how big of a problem Cohen may prove for his old boss and client.

In a hearing in the wake of a federal raid on his office, home, and hotel room, prosecutors in the Southern District of New York revealed Friday that Cohen is a subject in a months-long criminal investigation, reportedly focused at least in part on his role in arranging a nondisclosure deal and $130,000 payout to Stormy Daniels. The pornographic actress, whose real name is Stephanie Clifford, accepted a payment from Cohen shortly before Election Day in 2016 in exchange for her silence on a sexual relationship she says she had with Trump in 2006. Daniels’ lawyer, Michael Avenatti, said on Friday that his client may attend a Monday hearing being held in connection with the Cohen raid.

On Friday, the Wall Street Journal reported that Cohen late last year helped arrange a $1.6 million payment by Elliott Broidy, a top Trump fundraiser and defense contractor, to a former Playboy model who claimed that Broidy impregnated her. According to Broidy, who stepped down as a Republican National Committee vice chairman in the wake of the report, Cohen inserted himself into the matter after speaking to Keith Davidson, an attorney who also represented Daniels when she agreed to accept the hush payment from Cohen. Cohen then negotiated an agreement with Davidson on Broidy’s behalf, receiving, according to CNBC, a $250,000 fee for brokering the deal.

Cohen has also admitted he was in contact with American Media Inc., the owner of the National Enquirer, during the company’s discussions with a Trump Tower doorman who eventually obtained $30,000 for exclusive rights to a story he told suggesting Trump had fathered a child out of wedlock with an ex-employee. The tabloid then did not publish the story, in an example of a tactic known as “catch and kill.”

The disclosures raise the prospect that Cohen may have cut other deals to bury salacious claims about Trump. If Cohen and AMI’s payments were designed to prevent the disclosure of information that would hurt Trump’s presidential bid, they could be found to be illegal in-kind contributions far in excess of personal contribution limits.

Cohen’s contacts on the Moscow project came as candidate Trump was falsely insisting he had no business interests in Russia.

Cohen also figures in the Trump-Russia investigation through his efforts, in 2015 and early 2016, to help Trump secure a licensing deal for construction of a Moscow high rise. In January 2016, Cohen emailed Russian President Vladimir Putin’s spokesman in bid to secure Kremlin help launching a new Trump Tower. Cohen’s contacts on the project came as Trump was on the campaign trail, falsely insisting he had no business interests in Russia.

After the election, Cohen delivered to Michael Flynn, Trump’s first national security adviser, a so-called peace plan for Ukraine that was developed by pro-Russian Ukrainian lawmaker. The plan would have ended US sanctions imposed on Russia in 2014 in response to its incursion into Ukraine in exchange for minimal Russian concessions. Mueller and congressional investigators are also known to be looking into both matters.

A significant portion of Cohen’s wealth has come through the taxi industry, and federal investigators are also said to be examining whether Cohen committed bank fraud when he secured loans using a taxi medallion business as collateral, the Washington Post reported.

The web of investigative threads surrounding Cohen has not only eliminated his effectiveness of as an advocate for the president: They’ve made him a massive liability, offering a dizzying array of avenues for Mueller to explore. The president is likely foremost among the Americans who are, for now, left wondering what secrets the FBI’s investigation into Cohen have unearthed.