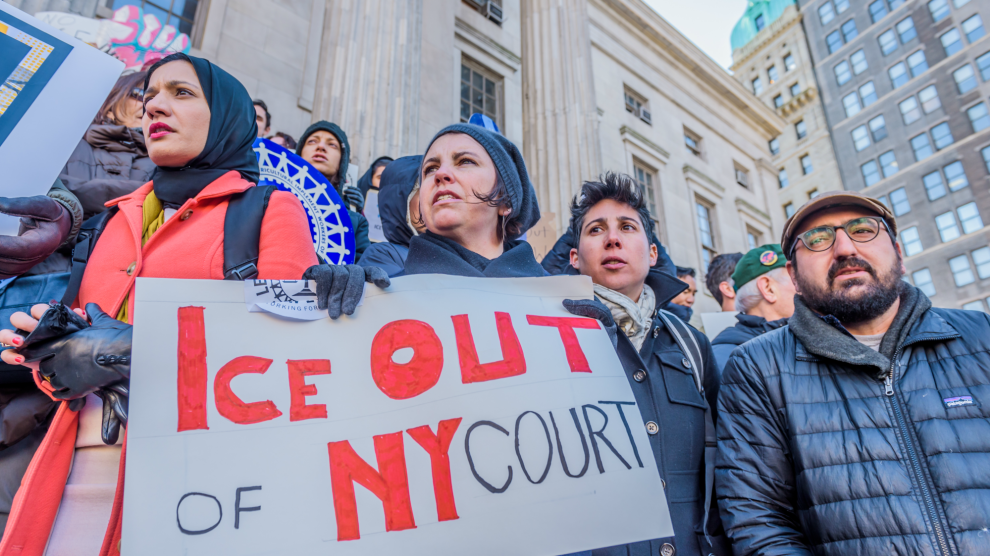 Immigrant rights organizations hold a rally in Brooklyn to call on a court to implement a policy to prohibit Immigration & Customs Enforcement agents from entering state courthouses.Erik Mcgregor/Pacific Press via ZUMA Wire

It’s been widely reported that, emboldened by Trump’s hardline stance on the topic, Immigration and Customs Enforcement agents are increasingly broadening the scope of their deportation operations. Data released Thursday confirms that ICE is no longer as focused on picking up people who have just crossed the border and instead is more frequently rounding up immigrants who have lived in the United States problem-free for years.

The new data, published by the Transactional Records Access Clearinghouse, a nonpartisan research center, shows that a staggering 43 percent of new cases brought by the Department of Homeland Security to immigration court last month involved people who had lived in the US for two or more years, compared to only 6 percent in December 2016 at the tail end of the Obama presidency. What’s more, a whopping 72 percent of December 2016 cases involved recent arrivals, while only 10 percent of March 2018 cases did.

What do these numbers say about Trump and ICE’s immigration priorities? Nicholas Espíritu, a staff attorney at the National Immigration Law Center, told Mother Jones that while the Obama administration focused on those with serious records, Trump’s tactic “is, in essence, no priorities, [because] everyone is a priority.”

“Government resources are being used to increasingly tear individuals from communities that they’re longstanding members of, potentially affecting more families, more mixed-status families, more people with deep ties to US communities,” he said.

Twenty percent of March 2018 immigration cases involved immigrants who have resided in the US for five or more years, according to the TRAC report. TRAC also notes that the data likely underestimates how long any given person has lived in the country because it’s based on the latest recorded entry date, rather than the initial entry date.

If “everyone is a priority” for Trump as Espíritu says, then why are there so few recent arrivals in the courts? Espíritu told me it’s hard to say, although it’s possible that there are fewer opportunities for new arrivals to go before a judge, meaning more immigrants are going through expedited removals instead.

Still, the data aligns with ICE’s newfound abandon regarding who they deport. As my colleague Noah Lanard reported Friday, the agency has begun targeting people with deportation orders while they are meeting with US Citizenship and Immigration Services to obtain legal status. Espíritu said the data reveals the administration’s actual goal: end immigration.

“This is something that shows that it is a targeting of immigrants and immigrant communities, not a real focus on public safety, that is motivating the Trump administration’s latest priorities,” he said.