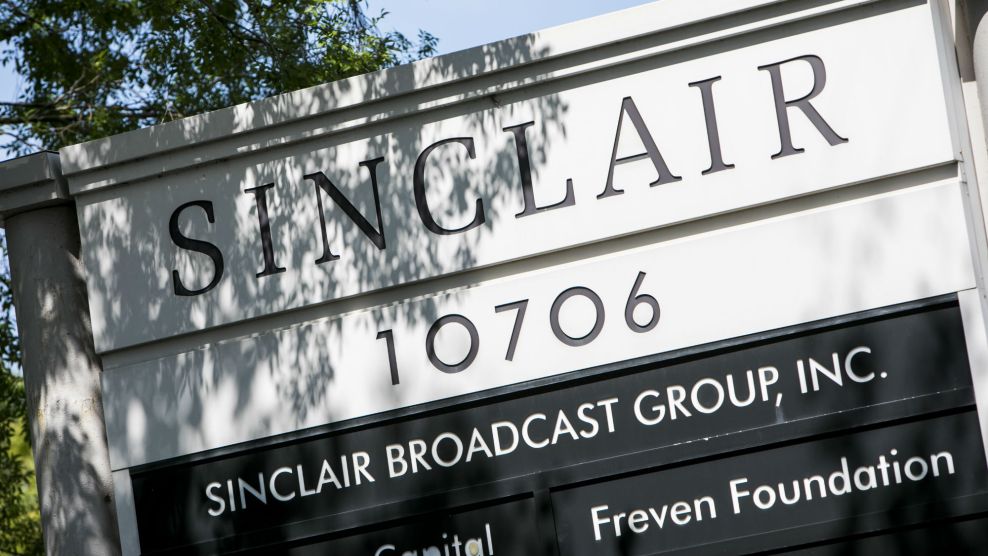 Chris Ripley, the president and CEO of Sinclair Broadcast Group, told employees of the local-TV juggernaut that “extremists” who “do not like what they hear or see” were trying to “bully” the company and deserved the blame for the blowback to Sinclair’s decision to force its anchors nationwide to read an identical, pre-written script warning about “false news stories” and biased journalists trying to “control exactly what people think.”

A video by Deadspin that spliced together scores of Sinclair anchors reading the same script went viral a week ago. It led to a torrent of criticism of the broadcaster, which owns and operates nearly 200 local TV stations across the country, and calls to boycott the company. A former anchor at Sinclair’s Providence, Rhode Island, station wrote in an op-ed that Sinclair “is attempting to use its local stations” to “advance its own political agenda.” A Sinclair station in Madison, Wisconsin, tweeted that it had refused to run the statement. Sinclair executives have responded to the outcry by saying the anchor statements were focused on fake-news stories spread on social media and were intended to restate company’s commitment to “fact-based reporting.”

In his Tuesday email (subject line: “News Promotion Controversy”) Ripley called criticisms of the anchor statements “politically motivated attacks.” He apologized to employees for “having to field nasty calls, threats, personal confrontations, and trolling on social media.” An employee at a Sinclair-owned station provided the email to Mother Jones. A spokesman for Sinclair did not immediately respond to a request for comment.

Sinclair has long denied any political leanings or agenda in its own operations. But as Mother Jones reported last year, David Smith, the executive chairman and de facto leader of Sinclair, has met personally with President Trump and has used his company to elevate pro-Trump voices, hiring former Trump aide Boris Epshteyn and using former White House adviser Sebastian Gorka as a talking head.

In a new interview with The Guardian, David Smith again denied accusations of political bias but recounted how he had offered up Sinclair’s platform to Trump after the candidate had clinched the Republican presidential nomination in 2016. “I asked [Trump], ‘Would you like us to embed with you during your campaign?’ And he brought a bunch of people in the room, and he said, ‘Well, whatever.’ And I said: ‘We are here to deliver your message. Period.'”

I know that for many of you, this past week has been challenging as the stations bore the brunt of politically motivated attacks regarding our news promotions. As you know, the practice of on-air personalities following a script is not unique to Sinclair, however, the blowback we received for doing so certainly is. For having to field nasty calls, threats, personal confrontations and trolling on social media, I am truly sorry you had to endure such an experience. However, as an organization it is important that we do not let extremists on any side of the political fence bully us because they do not like what they hear or see.

On Friday Scott Livingston and I had a News Director meeting to answer questions about the situation from the field. At the end of the call I did a recap regarding our commitment to local that I would like to paraphrase for the benefit of those that were not on the call.

In the TV station business, there are four core sources of value: 1) wireless spectrum, 2) programming/distribution contracts, 3) local news/content and 4) local sales/relationships. Due to our unique engineering talent and industry leadership in next generation TV (ATSC3.0), Sinclair is most known for spectrum, and often times this leads to a perception that we do not value the local aspects of the business. This perception is not consistent with the value drivers of the industry. In fact, two out of the four value drivers in this business are locally based.

As we enter into a time of unprecedented change and disruption in media, it’s more important now than ever to be focused on serving our local communities and businesses with the best programming and the best marketing services. Those that fail to do these two things well and fail to innovate will not be in business 5-10 years from now. That means we cannot be satisfied with the status quo way that TV broadcasting has historically operated. To that end, Sinclair will continue to pursue new and innovative strategies including our hybrid approach of bringing together the best of the local broadcast model with the best of the network model which will undoubtable expose us to more criticism because “no other local TV broadcasters does it that way.” However, those that do not answer the call to innovate will be sucked into the black hole that is big tech which is consuming every segment of the media universe. Contrary to much of the uninformed coverage on Sinclair we are not a monopoly and do not have any material market power, even by pre-internet standards. We simply have a seat a large table of competitors and potential substitutes. A seat that we have to earn the right to keep by focusing on the needs of our local viewers and local advertisers.

So let me be clear, service and dedication to our local communities is an absolute priority here at Sinclair. It is a key strategic advantage for our company and often the reason others value us in the media ecosystem. Once again, my apologies if you were personally affected by the attacks from last week.