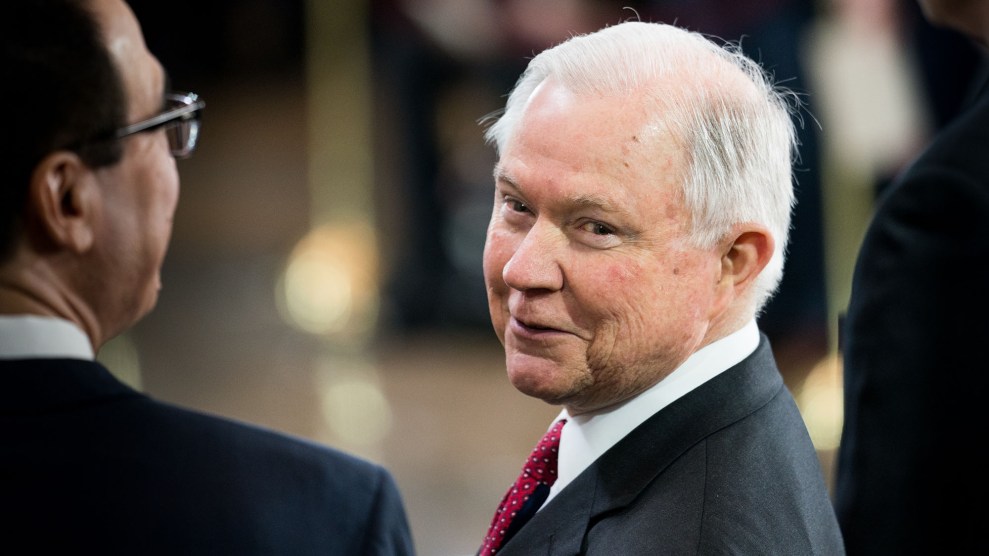 Last week, President Donald Trump tweeted his frustration that the FBI was not providing documents about his former political opponent, Hillary Clinton, to congressional investigators at a rapid enough clip. What Trump didn’t mention was that Attorney General Jeff Sessions had already instructed the FBI to pick up the pace. In fact, Sessions had long been doing Trump’s bidding on politically sensitive matters that he promised to recuse himself from. A few weeks earlier, after Trump had publicly called for the ouster of former FBI Deputy Director Andrew McCabe before he could retire with full benefits, Sessions fired him. And since last summer, Trump and Republicans in Congress have repeatedly called for investigations into Clinton and the FBI. Last week, Sessions revealed that a US attorney in Utah has been investigating these matters since the fall.

All of these actions would appear to violate the pledge Sessions made on March 2, 2017, when he announced that he would recuse himself from any investigations into the 2016 presidential campaign, including the investigation into possible Trump-Russia collusion. It’s no secret that this recusal upset Trump, who expects his attorney general to protect him, and nearly cost Sessions his job. Sessions also promised Congress, under oath, to recuse himself from investigations into Clinton, including probes of her email server and the Clinton Foundation. Mother Jones has documented numerous instances in which Sessions involved himself in these issues despite his recusal.

So what can be done to enforce Sessions’ recusal pledge? According to ethics experts, very little.

“There’s no question in my mind that Sessions has violated his recusal obligations on multiple occasions by going after the political opponents of the president,” says Austin Evers, the executive director of American Oversight, a government watchdog group. “Is there a mechanism for punishing Jeff Sessions for violating his ethics rules? Unfortunately, the answer lies with the president.”

Normally, the possibility of being fired by the president would motivate an attorney general to hew to recusal obligations. But in the case of Trump, the recusal was a reason to dismiss his attorney general: Trump publicly mocked Sessions for his recusal, and special counsel Robert Mueller is investigating whether Trump tried to force Sessions out. Breaking the rules is likely to help Sessions keep his job.

“Is there a mechanism for punishing Jeff Sessions for violating his ethics rules? Unfortunately, the answer lies with the president.”

Justice Department ethics rules bar department officials from any involvement in investigations of people or campaigns with which they have a personal relationship. Sessions served as a campaign adviser and confidant to Trump in 2016, so his recusal was required by those rules. But the rules don’t have any enforcement mechanism, leaving the Justice Department to police itself.

Against the president’s withering criticism, Sessions has defended his decision to recuse himself from the Russia investigation. “I think I did the right thing,” Sessions told Time magazine recently. “I don’t think the Attorney General can ask everybody else in the department to follow the rules if the Attorney General doesn’t follow them.” But violating his recusal without repercussion sets the opposite tone, and lower-level appointees could feel more empowered to break their own recusals.

The Monday after McCabe’s firing, American Oversight asked the Justice Department inspector general to investigate Sessions’ involvement in multiple matters he is recused from and to release his findings to the public. But the inspector general cannot sanction Sessions or change his behavior. Instead, he can only investigate the matter, issue a report to Congress, and recommend penalties, says Andrew Kent, an expert in professional responsibility and legal ethics at Fordham University School of Law.

“It’s hard to think of a scenario where an attorney general would be held to account because of administrative violations,” says Jeff Ruch, executive director of Public Employees for Environmental Responsibility, which represents federal whistleblowers. He notes that the White House has thus far declined to discipline multiple officials for violations of the Hatch Act, which bars government employees from using their office to influence political races. “It would be up to either the president to take action or the attorney general to punish himself.”

The Justice Department’s Office of Professional Responsibility (OPR) is another avenue for investigating ethical violations that may violate the professional code of conduct all lawyers promise to follow. The office can investigate misconduct and send its findings to state bar associations for discipline. “If you’re talking about enforceability or enforcement of any sort of rule, I would look to the DOJ OPR to do that,” says Chuck McCullough, a former inspector general for the intelligence community. But the OPR doesn’t have the authority to tell the attorney general what to do. It’s hard to imagine the state bar of Alabama sanctioning Sessions, who has been a towering figure in state politics for decades.

The most serious repercussions of a recusal violation could come if the investigations into Clinton or the FBI end up in court as federal prosecutions. “If you’re talking about any sort of consequence, I would wonder whether or not there would be a practical problem in court with any of the evidence in terms of undermining the case because of appearance of bias,” says McCullough. Evers agrees. “Any defense lawyer worth his or her salt would raise the political pressures as a defense to the legitimacy of the charges,” he says.

There’s not complete agreement among ethics experts on whether all of Sessions’ actions involving the 2016 campaigns and Russia constitute violations of his recusal. On the McCabe firing, for example, Scott Amey, general counsel at the Project on Government Oversight, says some people argue that “he has the authority to fire an employee that made a misstatement to government investigators.” On the other hand, Amey continues, there are those saying, “Wait a second, this violates his sworn testimony to Congress that he would recuse himself from matters involving the Clinton Foundation”—the subject of the investigation McCabe is accused of lying about.

McCullough sees the McCabe situation differently: Sessions simply followed the recommendation of career officials who recommended he be terminated. “With recusals, I think there is a difference between recusing yourself from the substance of a matter and making a decision in terms of the process,” he says. The same goes for appointing a federal prosecutor to investigate matters he is recused from, says McCullough, who notes that the attorney general has ethics experts to guide him, and there should be “some reasonable documentation of how the process took place.”

Others think the situation is clear-cut. “If you are recused, you are recused, period,” Matthew Miller, who headed the Justice Department’s public affairs office under Attorney General Eric Holder, told Mother Jones earlier this year. “You’re not involved in any decisions, absolutely not. And you shouldn’t be involved in the congressional strategy around it.”

But when and to what extent Sessions consults with department ethics experts remains a mystery. In response to a question about their involvement in Sessions’ recusals, his spokeswoman, Sarah Isgur Flores, emailed simply that Sessions “considers his potential recusal on a matter-by-matter” basis and, if warranted,”would review the issue and consult with the appropriate Department ethics experts.”