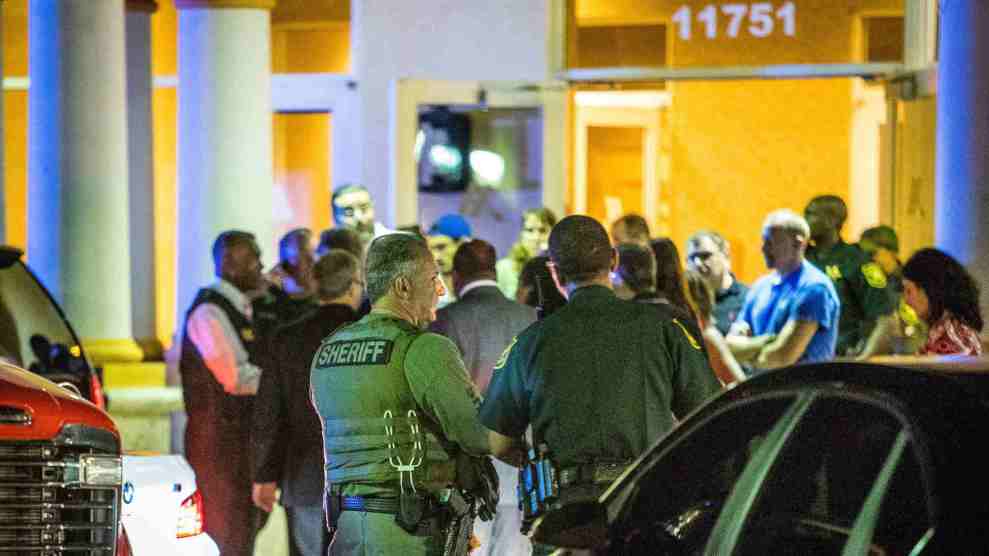 Police respond to the Parkland school shooting on February 14.RMV/ZUMA

In his speech to the National Rifle Association on Friday, President Donald Trump embraced the gun lobby’s solution to school shootings: arming the “good guys,” like teachers and school police officers, with guns. “They love their students,” he told the group at its annual convention in Dallas. “And they’re not going to let anybody hurt their students. But you have to give them a chance.”

One of the problems with that proposal is the good guys appear to be prone to dangerous mishaps. That’s what the Associated Press found when it reviewed 30 examples from news reports since 2014 collected by the nonprofit Gun Violence Archive. In just one 48-hour span in March, there were three such gun accidents. “The school police officer accidentally fired his gun in his Virginia office, sending a bullet through a wall into a middle school classroom,” the AP reported on Saturday. “The teacher was demonstrating firearm safety in California when he mistakenly put a round in the ceiling, injuring three students who were hit by falling debris. And the sheriff left a loaded service weapon in a locker room at a Michigan middle school, where a sixth-grader found it.”

In other cases, the AP found, “guns went off by mistake, were fired by curious or unruly students, and were left unattended in bathrooms and other locations.” These incidents have left at least nine people injured and have prompted disciplinary and criminal investigations.

As the White House leads a push to arm trained teachers and add more armed guards to schools, the AP says “doing so will almost certainly have unintended consequences.” The insurance industry seems to agree, as some companies have declined coverage for school districts that allow firearms on their grounds.

Since the Parkland school shooting in February, Republicans in 14 states have introduced 25 measures that would allow more firearms in schools. Eleven of these proposals have already failed, amid opposition from teachers’ unions and gun control advocates, and 13 are pending, reports the Washington Post. Only one measure has become law, and that was a Florida proposal that combined new restrictions on gun purchases with a voluntary program that allows school staff to opt-in for training as school marshals.

Police chiefs aren’t keen on proposals to arm teachers, either. “The more guns that are coming into the equation, the more volatility and the more risk there is of somebody getting hurt,” J. Thomas Manger, the police chief of Montgomery County, Maryland, and president of the Major Cities Chiefs Association, told Mother Jones in March.