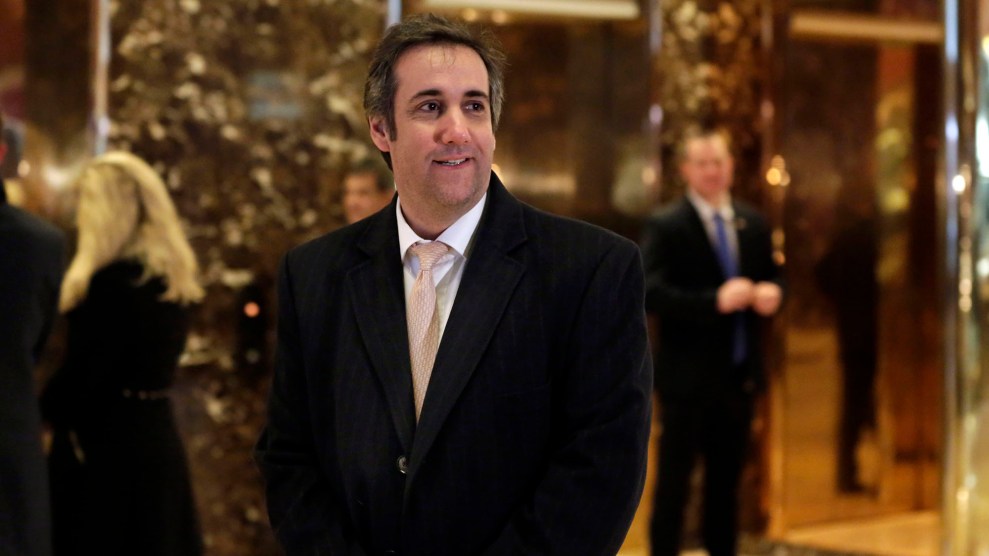 How much work did Michael Cohen do for the company affiliated with Russian oligarch Viktor Vekselberg that last year paid Cohen $500,000? Not much—at least according to two sources familiar with these payments.

Days ago, Michael Avenatti, the lawyer for porn star Stormy Daniels, released a report alleging that Vekselberg paid half a million bucks to Cohen, the longtime fixer and lawyer for President Donald Trump. The report said these payments came through an American investment firm called Columbus Nova and its CEO, Andrew Intrater. Following this explosive revelation, Columbus Nova released a statement confirming the payments to Cohen but insisting Vekselberg, a Putin-friendly oligarch who this year was sanctioned by the US Treasury Department, was not involved. And Columbus Nova stated the firm had hired Cohen as a “business consultant regarding potential sources of capital and potential investments in real estate and other ventures.”

“It was a way find new client-investors.”

According to the two sources who were authorized to speak for Columbus Nova, the controversial business relationship between Cohen and the company began in January 2017, during Trump’s inauguration celebration in Washington, DC. At that time, Intrater, an American citizen who had no history of making large political contributions, donated a whopping $250,000 to Trump’s inauguration committee. That gift gave Intrater the right to attend special inauguration events with a guest. For his plus-one, Intrater brought along Vekselberg, his cousin. Though Columbus Nova says it is wholly owned by Americans, its biggest client—the source of most of the $2 billion or so it manages—is Vekselberg’s Renova Group. As Mother Jones reported this week, Columbus Nova has numerous and deep financial ties to Vekselberg and Renova.

At these swanky events, the two Columbus Nova insiders said, Intrater and Vekselberg noticed Cohen hobnobbing with other well-to-do guests. Cohen “was interacting with some of the wealthiest people in the country,” one of the sources remarked. Though Intrater already managed money for one of the world’s richest men, he thought Cohen could provide entree to other potential investors. Cohen had influential people “coming into his orbit because he was perceived as being close to Donald Trump,” this source said.

Intrater ultimately agreed to pay Cohen $1 million over one year in monthly installments, the sources said, in the hope that Cohen would hook him up with deep-pocketed investors. “It was a way to find new client-investors,” one of the Columbus Nova insiders noted. The sources claimed that Vekselberg had nothing to do with this business decision.

The sources agreed to discuss the Cohen contract to address what they said are false media reports that Vekselberg was involved in Columbus Nova’s decision to retain Cohen. It remains unclear what prompted Intrater to provide the Trump inauguration committee that $250,000 contribution the same month he approached Cohen to be a rainmaker for his firm. It’s also unclear why this deal—connecting a Russian-oligarch-linked firm with Trump’s personal lawyer—went ahead at a time when the Trump-Russia scandal was expanding and contacts Trump and his associates had with Russia were under scrutiny.

Columbus Nova’s payments to Cohen were among a series of lucrative deals through which Cohen pocketed millions of dollars from companies that were seemingly looking to gain influence with Trump and his administration. The payments, first disclosed by Avenatti, but largely confirmed elsewhere, were made to a limited liability company Cohen set up called Essential Consultants. The disclosure of these payments has triggered a pay-to-play scandal that has merged with the Trump-Russia scandal and the Stormy Daniels affair. It was through Essential Consultants that Cohen in October 2016 paid $130,000 in hush money to Daniels, who claims to have had a sexual relationship with Trump. Trump’s lawyer, former New York City Mayor Rudy Giuliani, has said Trump did not know of Cohen’s deals with these corporations. (Trump himself claimed recently he was unaware of Cohen’s payments to Daniels, but then Giuliani appeared to contradict that claim.)

AT&T, Swiss pharmaceutical giant Novartis, and a Korean aerospace firm have all acknowledged handing Cohen big bucks for some form of assistance. These firms have not fully detailed what Cohen was supposed to do for them. On Thursday, the Washington Post reported that AT&T retained Cohen to provide advice related to its proposed merger with Time Warner—a merger the Trump administration is currently trying to block. Despite paying Cohen $1.2 million, Novartis said in a statement this week that after a single meeting with him, it “determined that Michael Cohen and Essential Consultants would be unable to provide the services that Novartis had anticipated related to US healthcare policy matters and the decision was taken not to engage further.”

Like other firms that hired Cohen for his connections, Columbus Nova ended up disappointed with the fixer. The Columbus Nova sources said Cohen failed to deliver the big fish. “He couldn’t bring in the volume of introductions,” one of the sources recalled. As a result, Intrater, after consulting with Cohen, stopped making payments to Cohen about halfway through the year, the sources said. In their account, it turns out, Cohen was a lousy investment for the firm.

This article has been updated for clarity.