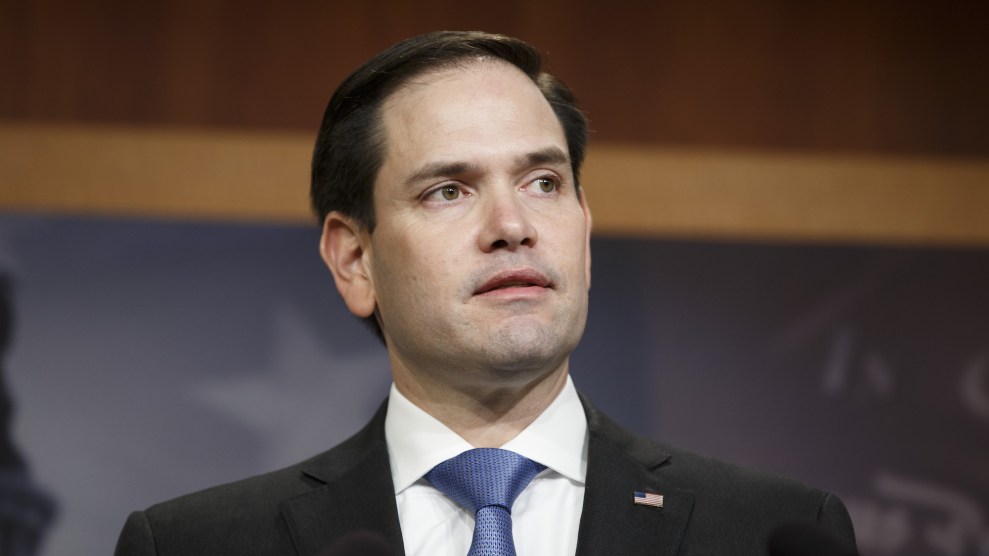 After entering Guatemala nearly a decade ago, Igor and Irina Bitkov became Gregorio Igor Benítez García and María Irina Rodríguez Germanis. They had paid $50,000 each to receive their new identities. Igor was sentenced this January to 19 years in prison for using fake identities and documents, while Irina and their daughter Anastasia received 14 years for similar crimes. Guatemala’s constitutional court annulled the Bitkovs’ sentences in late April and ordered that their cases be reconsidered, but their story remains a rallying cry for legislators and activists who believe the Bitkovs were victims of the “long arm” of Vladimir Putin’s regime.

Unlike with the Russia scandal that special counsel Robert Mueller is investigating, Latin America experts say there is no evidence that a Kremlin conspiracy corrupted Guatemala’s judicial system. Nevertheless, Sen. Marco Rubio (R-Fla.) is targeting the widely respected anti-corruption body that has helped take down top Guatemalan officials, along with smaller targets like the Bitkovs. Earlier this month, Rubio announced he was temporarily blocking $6 million in US funding for the United Nations-backed International Commission Against Impunity in Guatemala, which is known as Cicig, after its Spanish initials.

This is the second time in recent months that Rubio has alleged Russian interference in Latin America with little evidence. In January, Rubio, along with Sens. Robert Menendez (D-N.J.) and Tim Kaine (D-Va.), wrote to then-Secretary of State Rex Tillerson to express concern about potential Russian involvement in the upcoming Mexican presidential election.

But as Mother Jones reported last month, there is not much reason to believe the Russians are trying to interfere in the race. Daniel Erikson, a Latin America expert who worked in the Obama State Department and White House, said he hadn’t seen signs of Russian involvement. Raúl Benítez Manaut, a professor of international security at the National Autonomous University of Mexico, argued that “the company who is trying to modify the electoral attitudes of the [Mexican] people is Facebook and Cambridge Analytica, not the Russians.”

When it comes to the allegations of Russian collusion with Cicig, Jo-Marie Burt, a professor of Latin American studies at George Mason University and a senior fellow at the Washington Office on Latin America, told the Guardian, “Rubio changed policy after hearing one side…This is a classic fake news scenario.” Adriana Beltrán, a Guatemala expert at WOLA, tells Mother Jones she’s seen no evidence of collusion between Russia and the commission. Eric Olson, the deputy director of the Wilson Center’s Latin American Program, is similarly skeptical. To satisfy critics like Rubio, Cicig’s defenders would have to prove that Russia did not corrupt the commission—a task Olson compares to proving that the moon isn’t “made of Swiss cheese.”

Cigig was created in 2007 to help Guatemalan prosecutors take down criminal organizations that coopted government institutions after a 1996 peace deal ended 36 years of civil war. The commission has been seen as a rare bright spot in a region plagued by endemic corruption and has traditionally had broad bipartisan support in Congress. The United States provides about half of Cicig’s funding. WOLA concluded in a June 2015 report that Cicig has “achieved transcendental results” and recommended that Honduras and El Salvador consider creating similar commissions.

Rubio is withholding funds based on what one expert calls “a classic fake news scenario.”

The Bitkovs say their journey from Russia to Guatemala began after state-owned Russian banks forced their company into bankruptcy, and they fled the country, claiming they faced physical and legal threats. Before leaving Russia, they say their daughter Anastasia was kidnapped and only released after they paid the police $200,000. Bill Browder, a British investor who became one of Putin’s most prominent critics after an attorney he hired to investigate Russian corruption died in state custody, told legislators last month that it was a classic case of corrupt Russian officials and criminals working together to take property from business owners.

The investigation that ensnared the family in Guatemala dates back to 2010, when Fidel Pacheco, a Guatemalan union leader, accused officials at the country’s immigration authority of running a fraudulent passport operation. (After receiving death threats, Pacheco was murdered in his home, where he was reportedly found with his hands and feet bound.) Guatemalan representatives of Russian state bank VTB filed a legal complaint against the Bitkovs in 2013 for using false documents. VTB’s complaint was transferred to Guatemalan prosecutors who work with Cicig in November 2014, and they secured an arrest warrant for the Bitkovs soon after. They were convicted three years later, along with 36 other people involved with the fake document network, including government officials and human traffickers who were convicted of various crimes including facilitating illegal entry into Guatemala.

But the Bitkovs were the only ones convicted of using false documents, and Igor’s sentence was longer than that of the ringleader of the passport operation. Olson says prosecutors involved with the case have told him that the Bitkovs received tough sentences but that they were within Guatemalan sentencing requirements. “It’s not because of Russian manipulation,” he adds. “It’s because the judges were trying to follow the law.”

In March, Mary Anastasia O’Grady, a Wall Street Journal columnist who focuses on Latin America, began writing a series of op-eds that alleged a Russia-led conspiracy. Rubio shared the article on Twitter, where he wrote, “I support the idea behind #Cicig but new signs here of how it is being manipulated & used by radical elements on the left & even #Putin.” O’Grady later accused Cicig of delivering “rogue justice” and argued that some of its strongest defenders come from “Guatemala’s extreme left.”

Despite the lack of evidence of a Russian conspiracy, the US Helsinki Commission, a federal agency led by members of Congress, held a hearing about the Bitkovs in April titled “The Long Arm of Injustice.” Rubio, who could not attend in person, said in a statement that “Moscow seemed to have found a willing partner” in Cicig. Rep. Chris Smith (R-N.J.) went further. “Obviously, or likely, huge amounts of money were conveyed to interested parties,” he said at the hearing.

One week later, Rubio announced he was placing a hold on US funding for Cicig. Rubio wrote in a letter to Morales that the Bitkov case “raises serious questions about Cicig’s ability to remain free from the corruption that it has been charged with prosecuting.” He also asked Morales to investigate potential collusion between Cicig and Russia.

Morales will likely be more than happy to do so. Cicig and Guatemalan prosecutors are currently pursuing fraud charges against his brother and son. And a few days after Velásquez sought to strip Morales of legal immunity last year, the president unsuccessfully tried to have him expelled from the country. Earlier this month, Guatemala gave Sweden’s ambassador, Anders Kompass, 30 days to leave the country. Sweden is a prominent defender of Cicig, and Kompass had called the commission a “strong medicine” for Guatemala in January.

Rep. Eliot Engel (D-N.Y.), the top Democrat on the House Foreign Affairs Committee, says in a statement to Mother Jones that he completely rejects the allegations of collusion and warns against playing up fears of Russian interference. “The only winners from attacks on CICIG are the country’s most corrupt,” he says. “I take a back seat to no one in countering Russian aggression, but we cannot allow Russia to be used as a bogeyman to damage years of progress in the fight against corruption in Guatemala.”