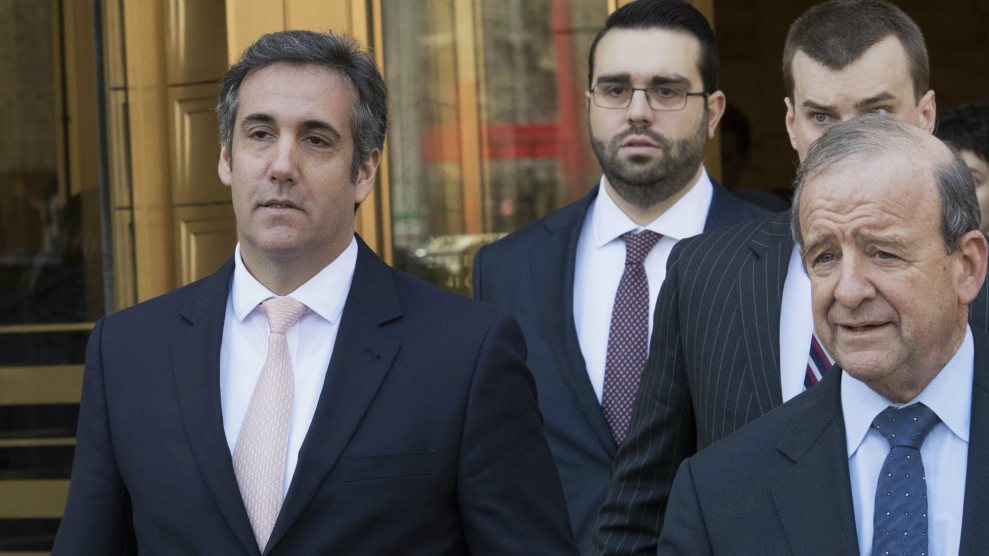 Michael Cohen, the longtime Trump fixer at the center of multiple presidential scandals, just mortgaged his multimillion-dollar condo in the swanky Trump Park Avenue building on the Upper East Side of Manhattan as part of a $9 million loan deal related to his troubled taxicab business.

Cohen has long had a business dealing in taxi medallions—the metal plates that give cabs the right to operate in New York City. Owning medallions was once a lucrative business—the price for a medallion reportedly peaked at $1 million each in 2013. But since the rise of Uber and Lyft, the value has crashed; last fall, medallions were fetching less than $200,000 a piece at auction, according to the New York Post.

In 2014, Cohen owned dozens of medallions worth an estimated $30 million, and he used them as collateral to borrow $20 million from two banks, including Sterling National Bank. Cohen has a partner in his taxicab business, Evgeny Friedman, who operates at least some of the cabs Cohen owns. As the Times reported, Cohen refinanced his medallion loans last month in a new transaction with Sterling, using as collateral money that Friedman might owe him. The Times described this arrangement as “unusual.”

But according to mortgage documents filed publicly on Monday, Cohen and his wife, Laura Cohen, also mortgaged their Trump Park Avenue condo as part of the deal with Sterling. Cohen’s attorney declined to comment about this new mortgage.

Cohen’s taxi empire and his relationship with Sterling have come under scrutiny in recent weeks. According to the Washington Post, during the FBI raid, agents sought communications between Cohen and the bank. “The request indicates that prosecutors may have an interest in specific financial transactions that Cohen undertook while using his taxi business as collateral,” the Post noted.

Cohen has long prided himself on his ownership of Trump-related real estate. In fact, by some accounts, Cohen’s tendency to eagerly purchase—and conspicuously brag about—Trump properties is one of the reasons he and Trump became close. According to property records, Cohen purchased the Park Avenue condo in 2005 for $4.9 million and has taken out loans against the unit several times. Cohen appears to have at least two other mortgages currently in place on the condo, one of which, for $500,000, was taken out in May 2016. Another mortgage was paid off in March 2016.

The Trump Park Avenue is one of the more luxurious buildings in the Trump real estate empire. Before moving to Washington, Ivanka Trump and Jared Kushner lived in one of the building’s penthouse apartments. The Trump Organization is embroiled in a legal fight with a Saudi prince over another condo in the building. One penthouse unit is on the market for $29.5 million. (It was once listed for $48 million.) Last year, Trump sold another penthouse unit for $15.8 million to a businesswoman with ties to Chinese military intelligence.