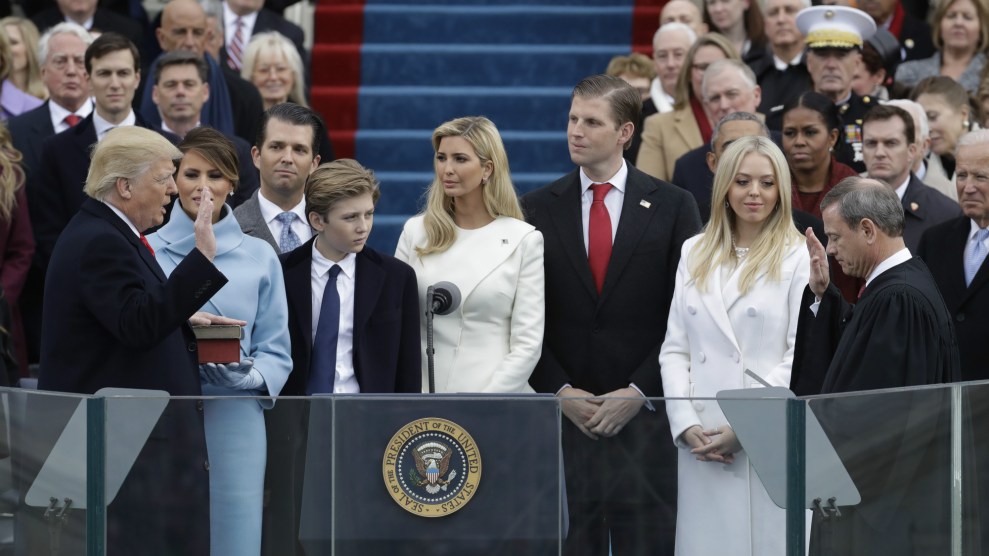 Robert Mueller has questioned witnesses about millions of dollars in donations to President Donald Trump’s inaugural committee, according to a new report from ABC News—and that’s likely to be a very deep, dark hole for the special counsel’s team to dig into.

The committee raised a record $107 million in the months between the 2016 election and Trump’s inauguration, but questions have lingered about where all the money came from and what ended up happening to it. While corporations are not allowed to give to political campaigns, inaugurations are a different story, and the inaugural committee picked up at least $45 million from donors that were not people. The source of funds behind at least one donor, a company called BH Group LLC that was set up in Virginia in August 2016, is still unknown. BH Group donated $1 million to the event.

According to ABC, Mueller’s team has questioned several witnesses about donors with connections to Russia, the United Arab Emirates, and Qatar. The questions have also focused on at least two additional donors: Len Blavatnik, a Ukrainian-born billionaire who donated heavily to Republicans in the 2016 elections, and Andrew Intrater, the chief executive officer of Columbus Nova, the investment firm with ties to Russian oligarch Viktor Vekselberg that paid Trump’s personal lawyer Michael Cohen $500,000 after the election. Intrater donated $250,000 to the event, and Vekselberg and Intrater attended.

The inaugural committee’s finances have been curious from the start. Prior administrations placed limits on donations in an effort to tamp down accusations of influence buying, but the Trump administration enthusiastically raised money—with no limits. The effort was led by California billionaire Tom Barrack, a longtime friend of Trump, but little is known about how the committee accomplished its record-breaking haul or how it spent its money. Sean Spicer’s insistence aside, the Trump inauguration was not particularly large, and the official events were relatively limited and toned-down in nature. Yet the committee spent nearly all of its total haul. It donated just $5 million to charity, while paying a whopping $57 million to four event-planning companies. The largest beneficiary was a company founded just weeks before the inauguration by a friend of Melania Trump, which was paid $26 million.

A number of VIP guests at the inauguration were treated to lavish perks. As Mother Jones documented shortly after the event, several of Trump’s international business partners attended and were even allowed to speed past crowds and law enforcement in a VIP motorcade down the inaugural parade route.

The inauguration may be a natural place for Mueller to look. Rick Gates—the longtime associate of former Trump campaign chairman Paul Manafort who was indicted by Mueller last year and who pleaded guilty and agreed to cooperate with the investigation—worked closely with Barrack on the event and was paid at least $100,000. The event’s vice chairman was Elliott Broidy, a financier who has become embroiled in several Trump administration-related scandals. Broidy has been named as a client of Cohen, and Broidy admitted to paying a Playboy Playmate $1.6 million after she said he impregnated her. Broidy has also been scrutinized for his business practices, which included marketing himself to foreign governments as a man with access to Trump.