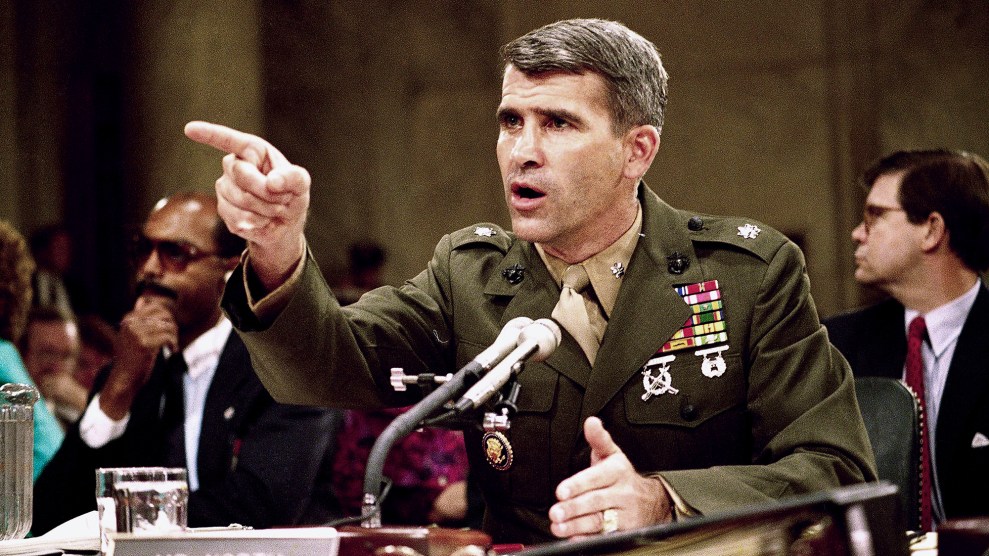 It makes sense that the National Rifle Association should anoint, as it did on Monday, Oliver North as its next president. North, a conservative firebrand, first gained public notice—or notoriety—three decades ago as the master plotter at the center of the Iran-Contra scandal. His actions as a mid-level operator within the National Security Council of Ronald Reagan’s White House—actions that came to be celebrated by the right—demonstrated a perverse version of patriotism: Laws, rules, and constitutional government could all be avoided or trampled in the zealous pursuit of policy ends. So he should fit in well at the NRA.

At a time when Nancy Reagan was promoting her “just say no” campaign, North was among those making common cause with criminals.

The Iran-Contra affair was essentially two scandals in one. The Reagan administration secretly sold weapons to Tehran and covertly supported the rebels opposing the socialist Sandinista regime in Nicaragua. North and his co-conspirators crossed streams and used the money they raised in the Iran arms deal to buy weapons and supplies for the Contras. They resorted to such skullduggery because Congress had prohibited the Reagan administration from providing lethal assistance to the Contras.

These arguably illegal shenanigans—designed as an end-run around Congress—were revealed in late 1986, triggering an extensive congressional probe, an independent counsel investigation, and several criminal prosecutions. North was prosecuted and found guilty of obstructing the congressional investigation, stealing and destroying evidence, and accepting an illegal gratuity. His convictions, though, were thrown out on what the law-and-order crowd might call a legal technicality. An appeals court found that witnesses in North’s trial were potentially affected by testimony North had given to Congress under a grant of immunity.

The Iran-Contra scandal was a dark episode, in which the US government hooked up with shady arms dealers and a variety of sleazy crooks and con men around the globe, including drug-runners. At a time when Nancy Reagan was promoting her “just say no” campaign, the secret operators of her husband’s administration were saying yes to a host of shady miscreants. And North was among those making common cause with criminals.

A 1998 report by the CIA inspector general on CIA-Contra drug connections quoted a chief of station for the CIA in Central America during the Contra war, noting that he was aware of allegations that some Contras were involved in drug trafficking. But, he added, “we were going to play with these guys. That was made clear by Casey and Clarridge.” He was referring to then-CIA Chief William Casey and Duane Clarridge, the chief of the agency’s Latin America division.

North, too, played along. According to several entries in notebooks he kept while working at the NSC, he was aware of ties between Contras and drug smugglers. The National Security Archive, a nonprofit research outfit, has chronicled these records. In an August 9, 1985 entry, North summarized a discussion about a plane used to bring supplies to the Contras in Honduras: “Honduran DC-6 which is being used for runs out of New Orleans is probably being used for drug runs into U.S.” In a July 12, 1985 entry, he referred to an arms warehouse in Honduras and noted he was told, “14 M to finance [the arms in the warehouse] came from drugs.”

North also received a memo from his liaison to the Contras in April 1985 reporting that officials in a group of Contra units included one rebel believed to have “potential involvement with drug running” and another who was “involved in drug running out of Panama.” Moreover, as the National Security Archive pointed out, in February 1986, North received a memo noting that a plane used for carrying aid to the Contras had previously been used to transport drugs. (By the way, the drug-runner who owned this plane was paid more than $300,000 by a State Department office overseen by North and two other administration officials for ferrying supplies to the Contras.)

In 1988, a Senate subcommittee chaired by then-Sen. John Kerry (D-Mass.) issued a report concluding that North and other senior officials ignored reports of drug smuggling related to the Contras. It pointed out that North had eagerly worked with Panamanian dictator Manuel Noriega, a known drug trafficker, to win Noriega’s assistance in the war against the Sandinistas. And there’s more: North led a behind-the-scenes effort to obtain clemency for José Bueso Rosa, a Honduran general who had plotted to finance an assassination attempt against the Honduran president with a $40 million cocaine shipment to the United States. Why? Bueso had helped the Reagan administration’s clandestine Contra operation. North and his colleagues ended up getting Bueso a reduced sentence.

During the Iran-Contra scandal, North and his colleagues in the Reagan administration conspired to evade a law passed by Congress and engaged in underhanded means to subvert the rules of democracy. But maybe a fellow with an established record in shady weapons deals and covering up the truth is just the right guy to lead the NRA.