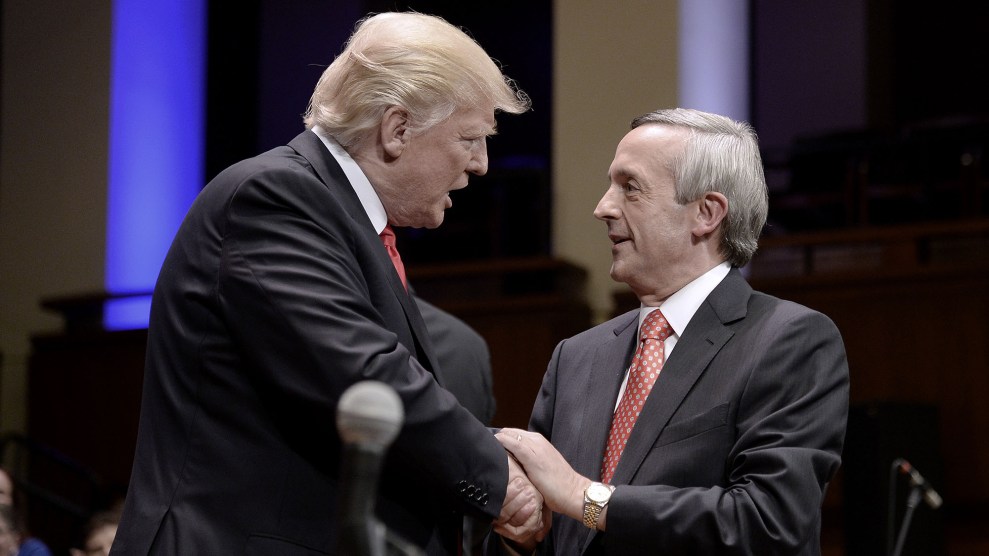 President Trump with Pastor Robert Jeffress during the Celebrate Freedom Rally in Washington, DC, on July 1, 2017. Olivier Douliery/CNP via ZUMA

An anti-gay, pro-Trump pastor from Dallas will give the opening prayer Monday night at the introduction ceremony of the new US embassy in Jerusalem. Pastor Robert Jeffress, a Fox News contributor and supporter of President Donald Trump, will add to the controversy surrounding the diplomatically awkward event.

Jeffress, who serves as an informal faith adviser to Trump, has maligned most world religions and condemned homosexuality, while on Fox he spouts biblical justifications for Trump’s agenda. Jeffress told Fox News that he would be giving the opening prayer at the ceremony Monday. It’s unsurprising, because when it comes to picking people for important jobs, Trump tends to go with people who are both loyal and appear frequently on television.

Jeffress, who runs the First Baptist Dallas megachurch in Texas, has referred to both Islam and Mormonism as “a heresy from the pit of hell.” He believes Islam, Mormonism, Hinduism, and Buddhism are all cults, and that Catholicism represents the “genius of Satan.” Jews, he believes, are going to hell. “You can’t be saved by being a Jew,” he’s said. Islam, he said, “is a religion that promotes pedophelia, sex with children.” And in a statement sure to please the Israelis, he has compared the treatment of Christians in the United States to the Nazi’s treatment of Jews right before they launched the Final Solution program to exterminate them.

Jeffress has also been in the news for his virulent opposition to gay rights. He is preoccupied with what LGBT Americans do in the privacy of their own homes, saying they are “engaged in the most detestable, unclean, abominable acts you can imagine.” He called the Supreme Court decision legalizing same-sex marriage “the greatest, most historic, landmark blunder in the history of the United States Supreme Court.”

Last year, Media Matters rounded up a collection of Jeffress’ most eye-popping statements:

Jeffress also provides religious cover for Trump’s policies and views. On immigration, where other Christian leaders have called for compassion toward immigrants, particularly undocumented people brought here as children, Jeffress has defended Trump. “The Bible also says that God’s the one who established nations and its borders,” Jeffress said on “Fox & Friends” last September. God “is not necessarily an open borders guy.” When Trump said he didn’t want immigrants from “shithole” countries coming to the United States, Jeffress said he disagreed with the president’s “vocabulary” but that Trump was “right on target in his sentiment.”

On Trump’s ongoing feud with NFL players protesting police mistreatment of African Americans, Jeffress declared the NFL protests “absolutely wrong” and said the players should be “thanking God that they live in a country where they’re not only free to earn millions of dollars every year, but they’re also free from the worry of being shot in the head for taking a knee like they would be if they were in North Korea.” In other words, Jeffress thinks NFL players should celebrate their right to freedom of expression by not exercising it.

Jeffress has referred to both Islam and Mormonism as “a heresy from the pit of hell.”

And speaking of North Korea, Jeffress drew attention last August when he said Trump had divine authority from god to bomb North Korea. In an interview with the Christian Broadcasting Network, he said, “In the case of North Korea, God has given Trump authority to take out Kim Jong Un.” A passage from Romans, he asserts, gives rulers “whatever means necessary―including war―to stop evil.”

Trump decision to relocate the US embassy from Tel Aviv went against the international consensus that doing so appears to favor Israel’s claim to Jerusalem in its decades-long struggle with Palestine. In practice, the ambassador to Israel, David Friedman, will split his time between Tel Aviv and Jerusalem going forward, and much of the embassy’s staff will remain in Tel Aviv. Trump will appear at the opening by video, while his daughter Ivanka and son-in-law Jared Kushner will be there in person. On Fox this week, Jeffress said his prayer would remind listeners that God supports Israel and will reward nations that support it as well. “Iran,” he said of Israel’s geopolitical foe, “is certainly no match for almighty God.”