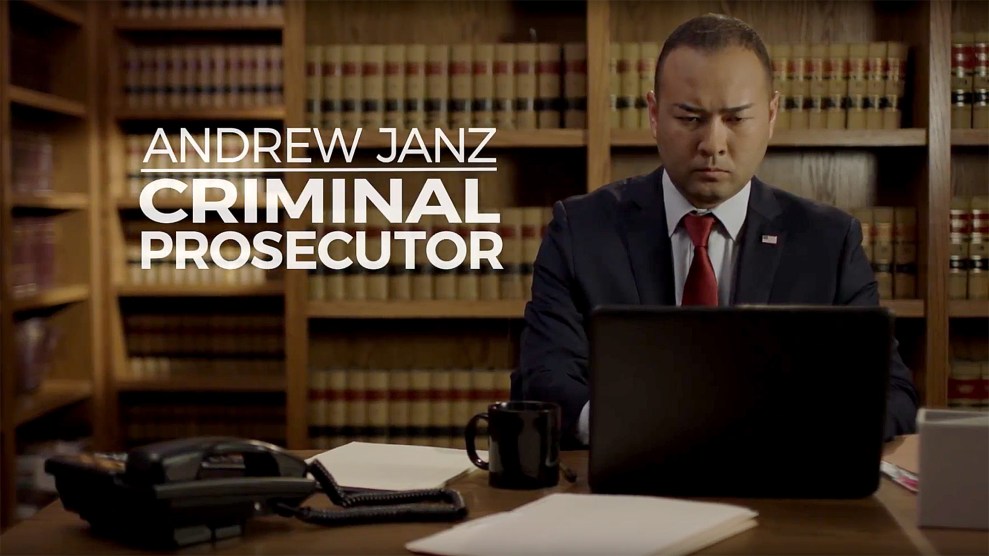 This morning, Andrew Janz, a 34-year-old Fresno prosecutor aiming to unseat Rep. Devin Nunes (R-Calif.), launched his first television ad in the closely-watched race in California’s Central Valley. Though Janz has hit hard at Nunes in the past, the new spot doesn’t mention his opponent once. Instead, the 30-second clip touts his history as a prosecutor who has put “violent criminals and gang members behind bars” and says he will “take on political corruption” in Washington. It also does not mention that Janz is a Democrat.

The ad’s only dig at Nunes is subtle. “It’s time for leaders who put people before their political careers,” says the narrator, ostensibly referring to Nunes, who has grabbed headlines as he’s used his role as the chair of the House intelligence committee to defend President Donald Trump. The Fresno Bee‘s editorial board has called him “Trump’s stooge.” Last week, Nunes threatened to hold Attorney General Jeff Sessions in contempt of Congress because the Justice Department declined to turn over classified material related to the ongoing Russia investigation.

Janz is likely to make it past the June 5 “jungle primary,” but after that, he’ll be running against Nunes in what has historically been an overwhelmingly Republican-dominated district in California’s Central Valley. Nunes has won seven of his eight elections with more than two-thirds of the vote. At the end of March, several political forecasting websites ranked the district “safe Republican.”

But cracks are appearing in that wall. When Nunes released his much anticipated memo alleging that the FBI abused its surveillance powers while investigating the Trump campaign, Janz raked in $164,000 in donations in the two days that followed. His total for the year is now up to $1.4 million—including $600,000 from February alone. (Nunes has more than $4.5 million in cash on hand.) In part because of this, Sabato’s Crystal Ball, a political forecasting website run out of the University of Virginia’s Center for Politics, downgraded the district to “likely Republican” at the end of April.

In February, Tom Holyoke, a professor of political science at Fresno State University, told Mother Jones that in the past, Democrats tended to only run candidates of “the sacrificial lamb variety” in the 22nd district. In Janz, he saw something different, a candidate with crossover appeal who “actually could potentially give Nunes a run for his money.” Janz’s first ad suggests that he’s not making the race about flipping the district, at least for now.