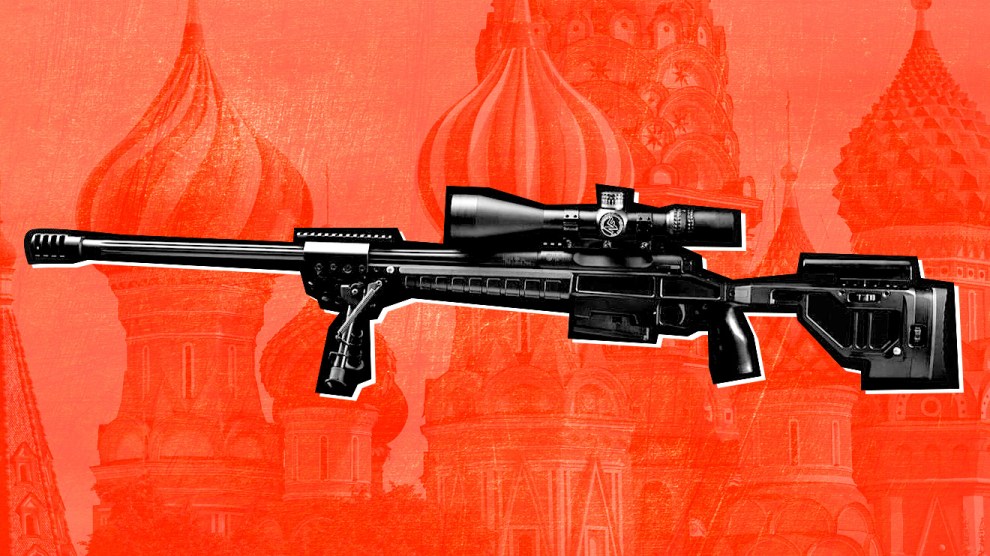 In late 2016, the US Army released a report noting that the Russian military, through experience gained during fighting in Ukraine, was undergoing a transformation and becoming a more potent battlefield threat to American forces. One troublesome development identified by the report’s authors was the increased proficiency of Russian snipers. “The capabilities of a sniper in a Russian contingent is far more advanced than the precision shooters U.S. formations have encountered over the last 15 years,” the study noted. One reason for this was the Russian military’s recent adoption of the ORSIS T-5000, a relatively new Russian-made firearm that the report called “one of the most capable bolt action sniper rifles in the world.” As one military technology expert noted, after reviewing this report, the US Army faced “being outgunned” by foes armed with the T-5000—which can be accurate at a distance of 2,000 yards—and these Russian rifles were showing up in Iraq and Ukraine. That is, this weapon posed a threat to US troops and those of its allies. Yet the National Rifle Association—which boasts it is identified with American patriotism—has helped promote Moscow-based ORSIS and its sniper rifle.

In December 2015, as has been previously reported, the NRA sent a high-level delegation to Russia. The group included Peter Brownell, then the first vice president of the NRA; David Keene, a past president; Joe Gregory, a top NRA donor; and David Clarke, then the sheriff of Milwaukee County, who would become a top surrogate for Donald Trump. (Brownell became president of the NRA last year.) The trip was at least partially subsidized by a curious Russian gun rights organization called the Right to Bear Arms that has been associated with two Russians, Maria Butina and Alexander Torshin, who for years had been forging connections with conservative organizations and gun aficionados in the United States. (Torshin—a director of the Russian central bank, a former senator, and a close ally of Putin—has been accused of having ties to Russian organized crime, an allegation he has denied. During the 2016 campaign, Torshin and Butina tried to connect with Trump campaign officials.) The Right to Bear Arms paid $6,000 toward the cost of Clarke’s trip.

While in Russia, members of the NRA delegation met with Dmitry Rogozin, the deputy prime minister, who was sanctioned by the Obama administration the previous year in retaliation for Putin’s invasion of Crimea and eastern Ukraine. Rogozin was a hardliner who led the ultra-right party Rodina, and part of his government portfolio was of particular interest to the NRA representatives: the arms industry. When Rogozin became deputy prime minister in 2011, he was given the task of overseeing Russia’s military-industrial complex and reviving the nation’s weapons-making business through private-public partnerships. One early endeavor in this regard, according to a Russian publication called Defense and Security, involved ORSIS, a small, private company, which about this time began receiving government contracts. (For a spell, Rogozin’s son was a deputy director of the firm.)

In 2014, Pravda reported Russia, now facing sanctions blocking the sale of made-in-Russia guns to the United States and Europe, was looking to export ORSIS sniper rifles as part of its development of new markets for Russian weapons, and the Russian newspaper referred to the T-5000 as the “Rogozin rifle.” The paper noted, “Defense officials from the Philippines and Pakistan evinced interest in the so-called Rogozin rifle, advertised by Putin and [American actor] Steven Seagal. The countries offered to test sniper rifle ORSIS T-5000 on their territory. Similar proposals came from Malaysia and Indonesia.” (In 2013, ORSIS announced it would be making a sporting version of its rifle endorsed by Seagal.)

While the NRA delegation was in Moscow, it visited the ORSIS offices and facilities. The group, accompanied by Butina, watched a video extolling the T-5000, toured the company’s manufacturing plant, and observed rifles being made. Then members of the delegation test-fired ORSIS rifles at an on-site shooting range. The company presented the NRAers with swanky watches bearing the company’s logo.

The day of the ORSIS visit, Clarke posted on Twitter a photograph of himself holding an ORSIS rifle.*

The NRA trip to ORSIS was of use to the Russian gunmaker. The company produced a video showing the NRA delegates oohing and aahing over the T-5000. The video was one in a series of short films promoting ORSIS and its weapons. The video was posted on YouTube four weeks after the visit.

For the US military, a concern regarding the proliferation of the T-5000 rifle is that it is one of the few Russian rifles that can pierce body armor used by American troops. As the National Interest reported in December, “The Russian involvement in Syria and Ukraine has provided a wealth of experience to the Russian military. One of the hallmarks of these engagements is the continued use of sniper tactics. As a result, the modern Russian sniper has evolved far beyond the relatively primitive technology used during the Cold War. Most notably, significant attention has been given to sniper systems that have the ability to penetrate body armor.” With the ORSIS T-5000, this article noted, the Russian military has “a formidable ability to defeat body armor at long ranges.”
“The concern of the US military,” says Olga Oliker, director of Russia and Eurasia programs at the Center for Strategic and International Studies, “is that this rifle has more range. The idea is a sniper at a tremendous distance can take out a few soldiers, cause great confusion, and a unit can then be hit with rocket strikes.” She notes that it is unlikely that American troops will have firefights with Russian forces anytime soon. “But will small, non-governmental forces, which won’t have rocket strikes, get these rifles, and can they do other things at a distance?” Oliker comments. “Possibly.”
And the ORSIS T-5000 has been spreading across the globe. During the February 2014 protests in Ukraine against then-President Viktor Yanukovych, dozens of protesters were killed by pro-government snipers, according to NBC News, and sniper teams supporting Yanukovych were armed with “Russian-made ORSIS rifles.” A 2017 post on TheFirearmBlog.com noted the rifle had been “spotted” being used by pro-Russian separatists in Ukraine. In 2016, a pro-Kremlin Romanian military expert pointed out that Russia was supplying the Syrian army of Bashar al-Assad with T-5000 rifles. And last September, Sputnik, the Russian English-language propaganda outlet, reported that the T-5000 “has gained popularity among special forces in Russia, Iraq, Syria, China and Vietnam.”
The NRA has been under fire for its Russian links. The outfit has refused to provide Congress with complete information about funding it receives from overseas, including Russia. McClatchy has reported the FBI is investigating whether Torshin illegally funneled money to the NRA to help Trump win the presidency. (The NRA was among the biggest pro-Trump spenders in the 2016 election.) And the ORSIS trip is another link between the NRA and Russia. The NRA did not respond to a request to explain whether the organization had any qualms about plugging a Russian weapon of concern to the US military.
This Russian rifle could be dangerous for American soldiers—and Russia has been arming its own military and security services with the weapon and distributing it around the world. In a recent article in Popular Mechanics, David Hambling, a military technology expert, notes that the T-5000 is changing “the shape of future battlefields” to the disadvantage of the United States. (“For now,” he notes, “the solution [for US forces] is simple—run.”) Still, the NRA—whom Trump has called “great American patriots” and whose convention he addressed on Friday—allowed itself to be used by ORSIS to promote the weapon. For the group, guns do seem to transcend all, including national security.
Image credit: Mother Jones illustration; Orsis; Getty

Clarification: An earlier version of this article stated that Clarke was holding a T-5000 in the photo he tweeted out, as his tweet suggested. After this article was published, gun experts contacted Mother Jones to say that the weapon is not a T-5000, but a variant of an assault rifle. The video does show him firing a T-5000.