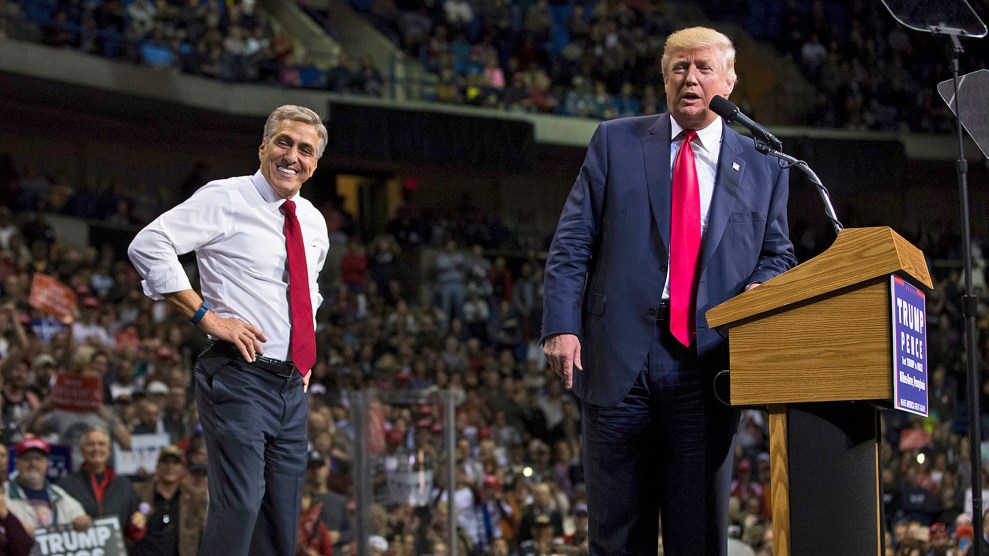 Nearly a decade before Donald Trump launched his campaign by accusing Mexico of sending “rapists” to the United States, Lou Barletta vowed to make the small city of Hazleton, Pennsylvania, “the toughest place on illegal immigrants in America.” With Barletta as mayor, Hazleton became the first city in the country to pass a law that fined landlords who rented to undocumented immigrants and stripped employers of their business licenses if they hired unauthorized workers. On Tuesday, Republican voters chose Barletta, who is now one of Congress’ foremost immigration hawks, to be the party’s nominee in Pennsylvania’s US Senate race.

Barletta defeated state Rep. Jim Christiana with Trump’s strong support. He will face two-term incumbent Democrat Bob Casey in the November general election. It’ll be an uphill climb for Barletta. An April poll from Muhlenberg College and the Morning Call, an Allentown newspaper, gave Casey a 16-point edge, and Barletta has not been a particularly effective fundraiser. But Barletta could still reassemble the white working-class coalition that delivered Pennsylvania to Trump in 2016, in part by mimicking the president’s nativist appeal. He has already attacked his opponent on immigration, falsely accusing Casey last month of wanting to “eliminate our borders.”

Barletta’s ability to step into the national spotlight while leading a 25,000-person city was made possible by Hazleton’s shifting demographics. In 2000, the year Barletta became mayor, Hazleton was 93 percent white and 5 percent Latino. When Barletta was elected to Congress 10 years later, the city was 37 percent Latino. In 2016, it was majority Latino.

As mayor, Barletta capitalized on the resentment among the city’s aging white population of the new immigrants, who were mostly from the Dominican Republic. “What I’m doing here is protecting the legal taxpayer of any race,” Barletta said in 2006. “And I will get rid of the illegal people. It’s this simple: They must leave.” He fulfilled his pledge to crack down on immigrants in 2006 when the city passed the Illegal Immigration Relief Act, the ordinance that punished people who rented to or hired undocumented immigrants. The law also made English Hazleton’s official language and required all city business to be conducted in English unless federal law prohibited it. Barletta wore a bulletproof vest to the meeting where the measure passed to emphasize his claim that undocumented immigrants were driving up crime.

The law was so sweeping that the right-wing Federation for American Immigration Reform, which aggressively supports Trump’s immigration agenda, argued it was too broad. A federal judge temporarily blocked the law before it went into effect, and the Supreme Court later allowed it to be permanently struck down. But the fight established the anti-immigrant credentials that underpinned Barletta’s second bid for Congress in 2008. He lost again, but two years later he won the seat.

In March 2016, Barletta became one of the first members of Congress to endorse Trump for president. He now supports Trump’s push to sharply cut both legal and unauthorized immigration. In a robocall released on Monday, Trump praised his “good friend” Barletta for being “tough on immigration” and “strong on the wall.”

Back in 2006, Barletta, the grandson of an immigrant and a member of the Congressional Italian American caucus, suggested that newcomers were taking over Hazleton. (He was wrong to suggest that immigration was anything new for the city; European immigrants, including many Italians, came to Hazleton in the 1800s to work in the coal mines.) “I lay in bed and thought: I’ve lost my city,” he recalled at the time. “I love the new legal immigrants; they want their kids to be safe just like I do. I had to declare war on the illegals.” Today, he cuts legal immigrants less slack, railing against family-based migration, which allows close relatives of immigrants to join them in the United States, as an economic and national-security threat.

Barletta has stood by his divisive record on immigration. “Democrats may say I’m a single-issue politician,” Barletta told National Review last year, “but that shows me they don’t understand the importance of that issue. It affects so many things.” In November, Pennsylvania voters will now have the chance to tell Barletta whether they agree.