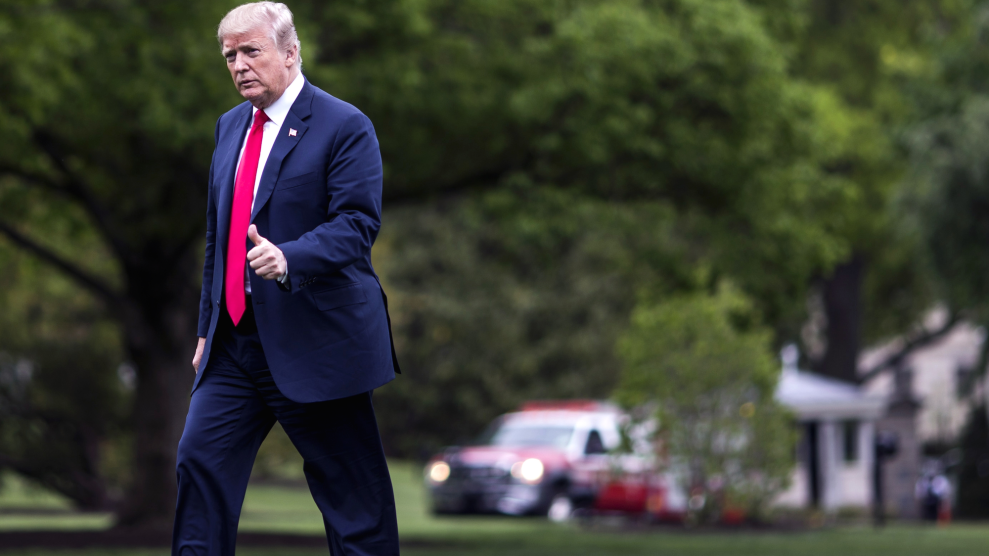 President Donald Trump announced Tuesday that the United States will withdraw from the Iran nuclear deal, bashing the historic agreement brokered by the Obama administration as a “horrible, one-sided” accord. The decision comes days ahead of the May 12 deadline Trump had set for renewing the accord—which its proponents consider to have been essential to limiting Iran’s nuclear capabilities despite some imperfections—and will mark the restoration of economic sanctions against Tehran.

“The deal allowed Iran to keep enriching uranium and over time reach the brink of a nuclear breakout,” Trump said from the White House. He added, “If I allowed this deal to stand there would soon be a nuclear arms race in the Middle East.”

“We cannot prevent an Iranian nuclear bomb under the decaying and rotten structure of the current agreement,” he continued. “The Iran deal is defective at its core. If we do nothing, we know exactly what will happen.”

Trump has long complained that the 2015 deal was flawed from its inception, threatening even during the campaign to leave the agreement once he took office. Claiming that the “insane” deal does not halt Iran’s nuclear ambitions, he has incorrectly asserted that the agreement provided Iran with $150 billion “carried out in barrels.” Trump has described the money as a “slush fund” for terrorist activities; in reality, the approximately $100 billion in frozen Iranian assets was returned to the country as a part of having lifted economic sanctions.

Shortly after the announcement Tuesday, former President Barack Obama released a statement condemning the decision as “misguided,” adding that it “turns our back on America’s closest allies, and an agreement that our country’s leading diplomats, scientists, and intelligence professionals negotiated.”

“In a democracy, there will always be changes in policies and priorities from one Administration to the next,” Obama’s statement continued. “But the consistent flouting of agreements that our country is a party to risks eroding America’s credibility, and puts us at odds with the world’s major powers.”

With the deadline looming, Iranian officials spent the past several weeks warning the US against withdrawing from the agreement, saying that the US would come to regret such a move. “We have plans to resist any decision by Trump on the nuclear accord,” Iranian President Hassan Rouhani said in a live televised address Sunday. He added: “Orders have been issued to our atomic energy organization…and to the economic sector to confront America’s plots against our country.”

But on Monday, the Iranian leader appeared to strike a more optimistic tone, suggesting that Iran’s involvement in the agreement could potentially survive a US withdrawal.

“If we can get what we want from a deal without America, then Iran will continue to remain committed to the deal,” Rouhani said. “What Iran wants is our interests to be guaranteed by non-American signatories. … Getting rid of America’s mischievous presence will be fine for Iran.”

European allies, including French President Emmanuel Macron and British Foreign Minister Boris Johnson, have urged Trump to uphold the accord. “If you just kill the JCPOA, without an option, you’ll just open a Pandora’s box,” Macron told reporters at the end of his state visit last month. Some Republicans, including the chairman of the House Armed Services, also expressed hope that the US would remain committed to the deal.

Meanwhile on social media this week, Trump appeared to be fixated with reports that former Secretary of State John Kerry has been quietly meeting with top Iranian and European officials to discuss ways to rescue the deal should the Trump administration withdraw.

John Kerry can’t get over the fact that he had his chance and blew it! Stay away from negotiations John, you are hurting your country!

This post has been updated to include Obama’s statement.