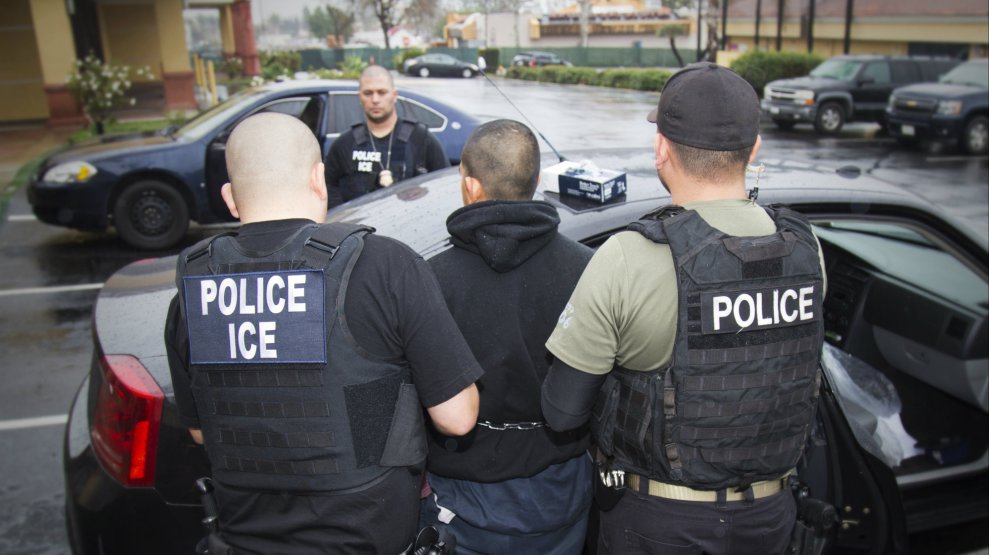 For the past year, several cities and states across the country have fought a very public battle against the Trump administration’s attempts to crackdown on undocumented immigrants, with some instituting new “sanctuary” policies limiting their cooperation with the federal government on immigration enforcement. In the lead up to Trump’s inauguration, for instance, California—home to about a quarter of the US’s undocumented population—passed SB54, a law that prohibits state and local law enforcement agencies from cooperating and sharing information with Immigration and Customs Enforcement (ICE), the agency tasked with arresting and removing undocumented immigrants. The Trump administration has since sued the state over SB54 and two other laws, and it has threatened to withhold federal funding from other sanctuary jurisdictions that refuse to cooperate with ICE, such as Los Angeles, Seattle, and Washington, D.C.

The report, released Tuesday by the Migration Policy Institute, a nonpartisan think tank in Washington, D.C., provides some of the most detailed analysis to date on how immigration enforcement has changed under Trump and its effects on different states. Over the course of six months, researchers visited seven ICE field offices and 15 jurisdictions with varying levels of cooperation with ICE. The report draws from more than 120 interviews with ICE officials, police chiefs, state and government officials, and others, as well as data from a Freedom of Information Act Request.

The report notes that while the Trump administration is “pulling as many levers as possible to reorient the enforcement system,” it has been hamstrung in its efforts by growing pushback from Congress, states, cities, and community rights groups—in particular, by sanctuary policies. Though policies can differ from place to place, most sanctuary jurisdictions restrict their cooperation by either refusing to hold immigrants in custody so ICE can arrest them, notify ICE if an immigrant is released from a state prison or jail, or allow ICE to screen people who have been arrested for immigration status. Because ICE traditionally relies on transfers through the criminal justice system for the majority of its arrests, the agency has stepped up other types of enforcement—including what’s known as “at-large” arrests, which happen within a community or at immigrants’ homes.

During the first 135 days of the Trump administration, the number of at-large arrests increased by 55 percent across the country, compared with the same time period the previous year. And throughout fiscal year 2017, ICE arrested about 40,000 people at home or in the community, up from about 30,000 in FY2016. Although the majority of immigrants involved in at-large arrests had prior criminal convictions, the number without criminal convictions more than doubled compared to the previous year, according to ICE data.

ICE also launched more targeted enforcement operations, specifically in jurisdictions with sanctuary policies. In one September 2017 operation called “Safe City,” ICE arrested nearly 500 immigrants across sanctuary jurisdictions, including Baltimore, Los Angeles, New York, and Cook County, Illinois. ICE officers told the report’s authors that in jurisdictions that don’t allow ICE access to “controlled” settings such as jails, the agency “has little choice but to carry out enforcement activities in neighborhoods and other community locations.” This echoes public statements from the agency; ICE Acting Director Tom Homan said in September that ICE has been “forced to dedicate more resources to at-large arrests” due to sanctuary jurisdictions.

ICE’s stepped up enforcement operations have also led to an increase in arrests of bystanders who happen to be in the area during an operation, known as “collateral arrests.” Though the Obama administration stopped making these arrests in its later years, the Trump administration has resumed them, noting that anyone who is in the country illegally is a target for deportation. While there isn’t exact data on collateral arrests, during Operation Safe City, for instance, nearly 40 percent did not have criminal convictions, even though the operation was supposed to target immigrants who had recently been released from jails.

The specific, and alarming, tactics ICE is turning to include arresting more immigrants at courthouses and near places considered “sensitive locations,” such as schools, churches, and hospitals. In one highly publicized case, an undocumented woman in El Paso, Texas, was arrested while attempting to obtain a protective order against an abusive ex-boyfriend. ICE has maintained that it does not make arrests within sensitive locations, and that it has increased arrests at courthouses because they are considered safer. In the state of New York, where some jurisdictions limit their cooperation with ICE, the agency made 53 courthouse arrests during the first eight months of the Trump administration, compared to 11 total arrests in 2016.

This has all led to heightened anxiety and fear among immigrants, which in turn, the report notes, has created some worrying changes in behavior. Several police chiefs in major cities have publicly expressed concern over ICE arrests leading to lower crime reporting. (A separate report from the ACLU and the National Immigrant Women’s Advocacy Project on ICE arrests near courthouses also found that immigrants have been less likely to report crimes and participate in investigations.*) MPI researchers also observed a decline in immigrants using public benefits and services in some areas; from September through December 2017, six clinics in Houston, Texas, saw a more than 50 percent decrease in undocumented patients.

“Without either getting more officers, or getting the cooperation of California and other cities outside California—it’s going to be very, very, difficult, if not impossible for ICE, to increase arrests,” Randy Capps, the report’s lead researcher, tells Mother Jones. But, “as far as looking over their shoulder and being worried, and generating a climate of fear, the Trump administration policies have been really effective.”

Correction: An earlier version of this article misstated the name of one group behind a report on courthouse arrests.