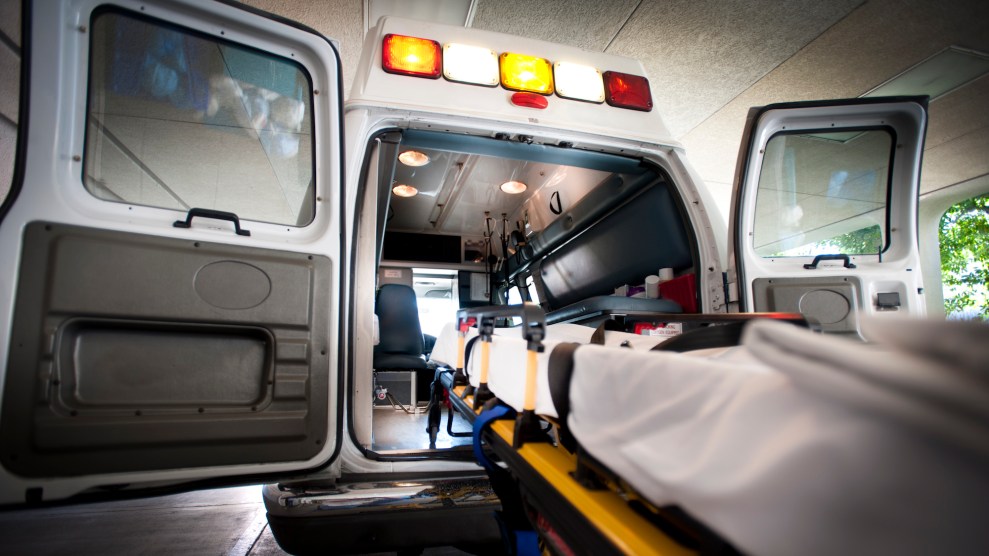 When Jose Manuel Azurdia Hernandez had a heart attack on December 19, 2015, in the Adelanto Detention Facility, a for-profit immigrant detention center in California’s high desert, none of the facility’s staff seemed particularly eager to help. An officer heard vomiting in Azurdia’s cell but didn’t check on him. A nurse who was informed that the 54-year-old Guatemalan was ill declined to see him, saying, “She did not want to get sick,” according to official documents. When another officer called the facility’s medical unit for help a few minutes later, there was no answer.

It took about two hours for Azurdia to be taken to a nearby hospital—too late to benefit from procedures that might have saved his life, medical experts later concluded. He died four days later.

Azurdia and at least seven more immigrants died while being detained by Immigration and Customs Enforcement between December 2015 and April 2017 due in part to poor or inadequate medical care, according to a new report from four immigrant rights advocacy groups. Delays in care, botched emergency responses, or improper decisions by low-level medical staff contributed to multiple deaths in ICE custody, the report concludes.

“Many of these issues that have been identified over and over again can be corrected,” says Victoria Lopez, senior staff attorney with the American Civil Liberties Union’s National Prison Project. “Many of these folks are suffering needlessly.”

The report, published jointly by Human Rights Watch, the ACLU, the National Immigrant Justice Center, and the Detention Watch Network, enlisted doctors with expertise in correctional health care to analyze ICE records of 15 deaths published on the agency’s website. (ICE recently sought permission to eventually destroy these records.) It builds on the work of two related reports, published in 2016 and 2017, which also concluded that some detainees could have been saved with better medical care. Out of 74 people who died in ICE custody since 2010, a minimum of 23 died in part because of substandard care, according to the report.

A 65-year-old detainee, Thongchay Saengsiri, showed symptoms of congestive heart failure for 10 months while in ICE custody, according to the report. In March 2016, after Saengsiri told medical staff at the LaSalle Detention Facility in Louisiana that he was having trouble breathing, he was handcuffed, leg-cuffed, and belly-chained while nurses and nurse practitioners completed paperwork for his transport to the hospital, official documents show. He went into cardiac arrest in the ambulance and was pronounced dead soon afterward.

Another detainee, 49-year-old Wenceslau Esmerio Campos, was found pale, sweating, and clutching his chest in his bunk by two guards at the South Texas Detention Complex in Pearsall, Texas, in November 2016. When one officer asked a guard to call in a medical emergency, the guard repeatedly refused, according to ICE documents. He went into cardiac arrest in an ambulance later that day and died two days later, following emergency surgery. The delay in transporting Campos to a hospital “significantly decreased” chances that doctors could have saved his life, concluded Marc Stern, a correctional health care expert who has conducted investigations of ICE’s medical care for the Department of Homeland Security

The report also criticized ICE’s practice of placing detainees with mental health needs in “isolation” cells. One 32-year-old immigrant’s mental state likely worsened, one expert concluded, when he was placed in solitary confinement in Adelanto after he returned from a hospital where he was being treated for psychosis. He committed suicide while in isolation in March 2017.

Medical care in some ICE detention centers is provided by the agency’s Health Services Corps. Yet thousands of detainees are treated by private medical contractors, which leads to inconsistent care and failures in oversight, Lopez says. The report’s recommendations—which call for an end to private medical contracting in detention and increased monitoring of ICE health care systems—are unlikely to be heeded by the Trump administration, whose policies have led to historic highs in the number of immigrants in detention.