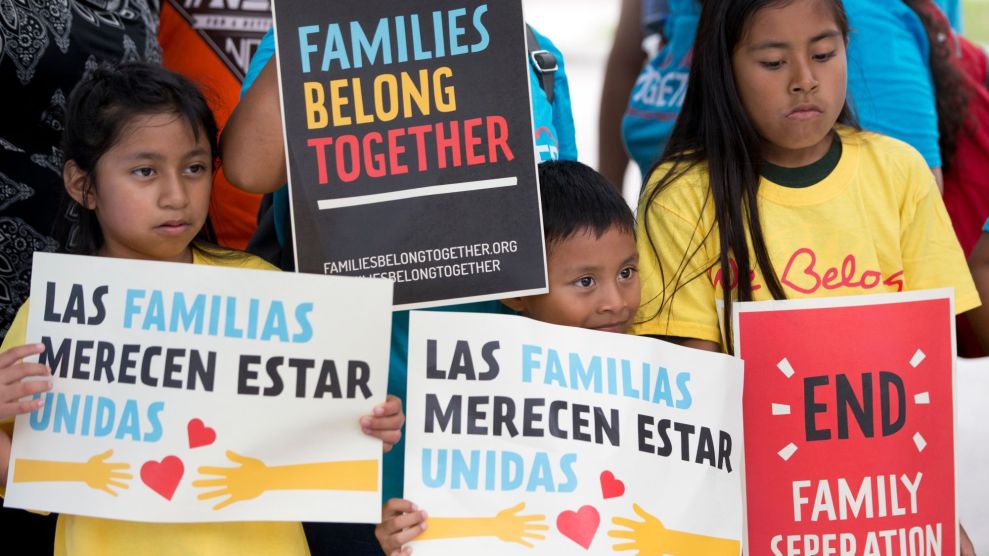 After weeks of heart-wrenching stories about nearly 2,000 migrant children being taken from their parents by federal officials, the controversy over the Trump administration’s family separation policy is finally coming to a head.

On Thursday morning, Attorney General Jeff Sessions cited the Bible to defend the policy, and later in the day press secretary Sarah Huckabee Sanders echoed his sentiment, saying, “It is very biblical to enforce the law, and that is actually repeated a number of times throughout the Bible.” Later in the day, House Republicans released a draft of a bill they claim would end family separation, but advocates were quick to point out that there’s no language in the bill that would outlaw the practice—and, beyond that, the bill would allow immigration officials to indefinitely detain kids alongside their parents. (NBC News reports that Republicans are tweaking the bill to address family separation.)

The increasing outrage over family detention was perhaps best encapsulated during Sanders’ Thursday press briefing, when she got into a tense exchange with a reporter who asked, “You’re a parent of young children. Don’t you have any empathy?”

Here are just some of the devastating stories that have fueled the growing backlash in recent days:

On Wednesday, CNN reported that a Honduran woman was breastfeeding her daughter in a Texas detention facility when the baby was taken away by immigration officials. The mother, who had been detained for crossing the border illegally, told her lawyer that she was handcuffed when she tried to resist the separation. A Border Patrol spokesman denied the allegation, telling CNN in an email, “Nothing could be further from the truth and these allegations are unsubstantiated.”

The response to the story on social media was overwhelming.

Unbelievable. This abuse of children has to stop. https://t.co/3dGkWI4JiM

They are flaunting a practice so unbearably cruel it hits a primal note of fear with Americans, and it should.

If they will snatch a breastfeeding infant and put it in a camp, there is no limitation to what they will do, and it won't end with immigrants and asylum seekers.

The Children Taken Away to “Bathe”

On Sunday, a Texas public defender told the Boston Globe that several of her clients had let Border Patrol agents take their children away under the impression they would be bathing them and bringing them right back. But then the kids never returned. The CNN report described similar cases, although Customs and Border Protection denied the practice.

Similarly, the Washington Post reported on a mother whose children never returned after they were taken away for questioning:

Juana Francisca Bonilla de Canjura wiped tears from her face in the courtroom as she listened to the proceedings through a translation headset. In her hands, she clutched the passports of her two daughters: Ingrid, 10, and Fatima, 12. They had come ­together from El Salvador, then were separated at a hielera. The bright blue documents were her only way of getting them back.

“I don’t have any idea where they are,” she’d told a Post reporter shortly before the hearing began. “Nobody knows anything. Nobody says anything—just lies. They said they were taking them for questioning, and we were only going to be apart for a moment. But they never came back.”

The Father Who Killed Himself in Detention

Marco Antonio Muñoz, an immigrant from Honduras, committed suicide in a Texas jail after being separated from his wife and child. Muñoz was found dead on the morning of May 13, less than a week after Sessions implemented the “zero tolerance” policy that led to these family separations. He had been planning to seek asylum with his wife and three-year-old son, according to the Washington Post, which first reported the story.

“They had to use physical force to take the child out of his hands,” a Border Patrol agent told the Post.

The Toddler Left “Somewhere in Texas”

Esteban Pastor came to the United States from Guatemala hoping to find a job so that he could pay off his son’s medical expenses, according to the Houston Chronicle. Instead, he was arrested for illegally crossing the border and separated from his 18-month-old son. Because Pastor had been deported from the country once already, he was imprisoned and then deported again.

Pastor tried to find his son, according to the Chronicle, but all he could find out was that the boy was “somewhere in Texas.” This is how reporter Lomi Kriel described his deportation:

In October, federal agents piled him into a van crammed with other migrants and drove them to the airstrip to board the government plane.

Where is my son? Pastor asked.

The agents shrugged. One made a call.

“Your son’s not going back today,” he announced.

No one could tell him more.