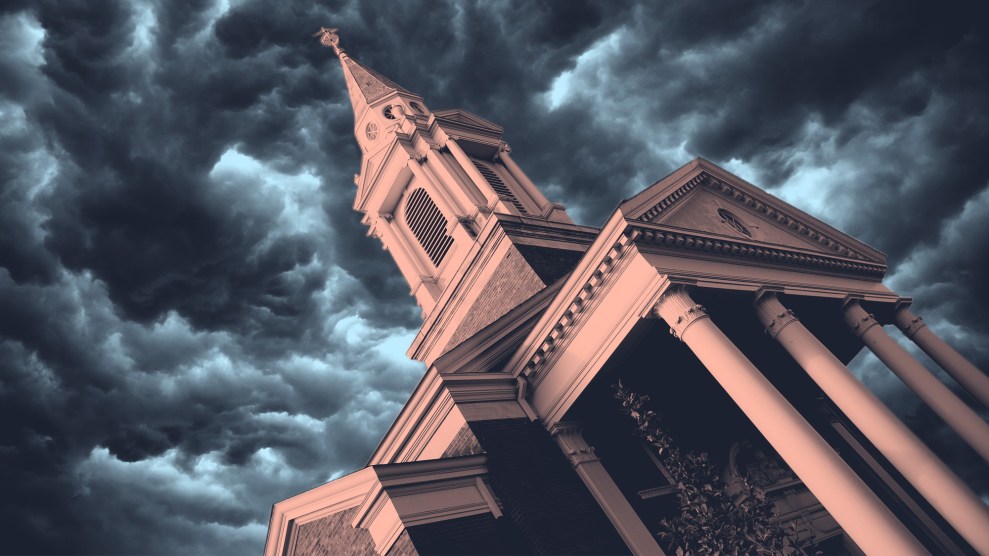 The Southern Baptist Convention elected a new leader Tuesday in Dallas amid an unprecedented conversation about gender.

J.D. Greear, the pastor at The Summit, a North Carolina-based Baptist megachurch, won 69 percent of the vote at the Baptists’ annual conference. He was widely viewed as the candidate more likely to broker change because of his age—at 45, he will be the second-youngest president of a denomination that skews older—his support for transparency in cases of abuse, and his relatively inclusive stances on the positions of women and minorities in the conference.

As the nation’s second-largest religious bloc, Southern Baptists wield considerable political power. And while the position of president is largely symbolic, Greear does now find himself with an influential platform to work from in hopes of creating a more inclusive church.

Greear has gotten some attention in the past few years for his comparatively open views on race and gender, particularly in such a conservative organization. During a Facebook Live statement three weeks before his election, Greear said that the SBC must be “as committed to raising [women] up in leadership and ministry as we are to our sons.”

Are we doing everything we can to encourage, equip, and empower women to leadership in ministry? https://t.co/RpFP66Yplh pic.twitter.com/grEOr1Tfpl

Greear has also emphasized the need for racial inclusivity, calling for “representation of people of color in our highest levels of leadership in a way that’s proportionate to their presence in our convention and our community.” But it’s not clear what meaningful representation would look like given that people who identify as black, Latino, or Asian comprise less than 10 percent of Southern Baptists.

To be clear, Greear is no radical egalitarian. He upholds the traditional Baptist approach to complementarianism, a theological notion that, while men and women are created equal in spirit, they are meant to hold distinct, complementary roles in marriage and family life (often cited is Ephesians 5:22, which says, “Wives, submit yourselves to your own husbands as you do to the Lord”), church leadership, and elsewhere.

For the record, I affirm w/o reservation the ‘complementarian’ view of gender in Scripture—>i.e. equal in essence but distinct in roles in family and church; equal access to spiritual giftings, though only men can serve in the office of… pic.twitter.com/i8YYXw6Fbn

Although Greear has supported women’s participation in the church, he upholds the traditional stance that some roles—such as that of pastor—are the domain of men.

“Complementarianism teaches that there are roles, distinct roles, that God gives to men and women in the home and in the church,” Greear said in his Facebook Live video. “And that is Biblical and we need to honor that.”

Greear addressed questions about how women fit into the structure of the church in a blog post last month. In response to a question about whether women should teach in settings like evening Bible study or large Sunday school classes, he wrote:

Yes, but not if she does so in a way that “mimics” the teaching authority of an elder. Perceptions are important, and if some in the church begin to look to a woman-teacher as their primary shepherd-leader, both she and they have gone into error. Thus, where small groups and Sunday School classes mimic the pastoral functions of the church … we believed mixed-gender groups should be led (or at least co-led) by men.

When it comes to abuse within the church, Greear is less equivocal, preaching that the SBC needs to be as transparent as possible to examine and eliminate such conduct.

"Sexual misconduct is as old as sin, but the avalanche of sexual misconduct that has come to light in recent weeks is almost too much to bear." -Al Mohler https://t.co/lKU1RnYdGf pic.twitter.com/GQ30c62zZX

Southern Baptists’ unusual focus on gender at this year’s conference was spurred by misconduct allegations within the church, including those against Paige Patterson, the former president of the Southwestern Baptist Theological Seminary, who had been slated to give a keynote sermon at the conference.

Patterson, who was dismissed by the Seminary’s board of trustees last month following allegations that he had mishandled sexual assault cases, was already facing criticism after a recording surfaced online in which he seems to counsel women to stay with their husbands even in cases of domestic violence.

Patterson was Greear’s doctoral advisor at Southeastern Baptist Theological Seminary and a mentor to the younger pastor. In the weeks since the allegations were made public, Greear has distanced himself from Patterson’s views.

“In the last few weeks a dizzying amount of revelations have come forward that really have revealed a deep problem in the heart of our leadership, the heart of our convention,” Greear said in a Facebook Live video that addressed the Patterson scandal.

Two symbolic resolutions at this year’s conference related to the recent scandals: One affirmed the “dignity and worth” of women and honored their contributions to the church. The other addressed abuse, resolving that the delegates “condemn all forms of abuse and repudiate with a unified voice all abusive behavior as unquestionably sinful and under the just condemnation of our Holy God.” The conference adopted all 16 resolutions put up for consideration.

Outside the conference center where the SBC met, demonstrators at the For Such a Time as This rally protested the “prevalence of abuse and its enablement within the Southern Baptist Convention.”

The organizers listed three demands: that women “be respected and honored within the churches of the Southern Baptist Convention—as Scripture teaches”; the creation of a clergy sex offender database for the SBC; and mandatory sexual assault and domestic abuse training for all SBC pastors and seminaries.

Greear admits that his denomination needs change. “Our doctrine and our mission are solid,” Greear said. “But I think we need a new culture and a new posture in the Southern Baptist Convention.”