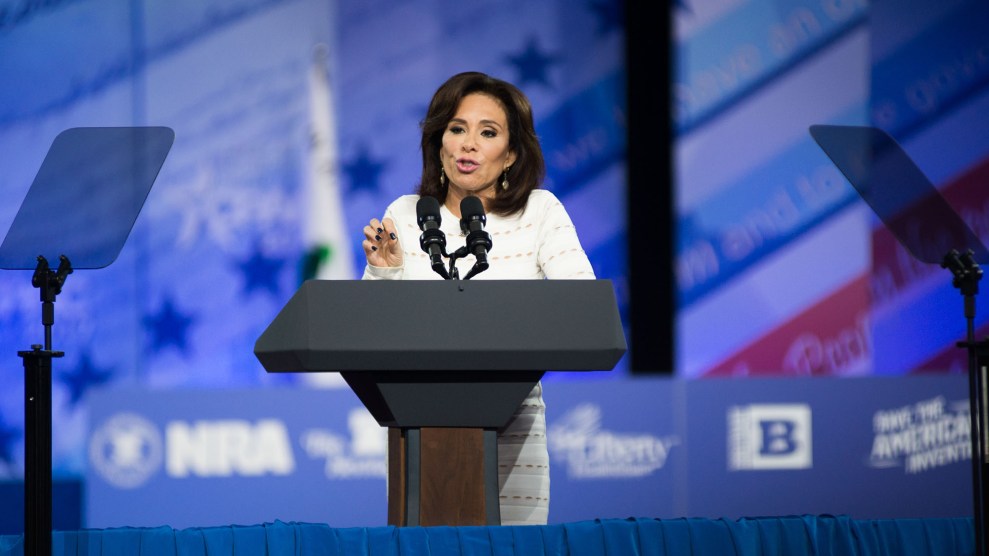 Fox News host and Trump superfan Jeanine Pirro wants to be attorney general. According to Politico, she has repeatedly told aides to President Donald Trump over the past 18 months that she’s interested in the country’s top law-enforcement job.

That would seem to be a longshot for a wildly iconoclastic TV host whose political career fizzled in a series of embarrassing electoral campaigns. But Trump regularly tunes in to her show and has received her in the Oval Office and at Mar-a-Lago, and she’s become one of his most influential advisers on the legal challenges that have come to define his presidency.

Pirro, a former district attorney and judge in Westchester County, New York, uses her Saturday night show on Fox, Justice with Judge Jeanine, to urge Trump to throw out the top officials at the Justice Department and FBI and replace them with political cronies who will prosecute the Clintons and other Democrats. She persistently claims that “deep state” officials conspired to elect Hillary Clinton and frame Trump—and that the president’s embattled attorney general, Jeff Sessions, is abetting them by recusing himself from the Russia investigation.

Pirro’s antipathy for Sessions is a recurring feature on her show, one that could theoretically help her take his job. She is not shy about pushing Trump to remove Sessions. During one of her fiery opening monologues in May, she called Sessions “the single most of dangerous person to the agenda of President Trump, the Republican Party, and ultimately to all Americans…the most dangerous man in America.” Her reasoning is that Sessions won’t take government traitors and Democrats “out in cuffs” and has instead handed his oversight of the Russia investigation to his deputy, Rod Rosenstein, who has been a target of Trump’s wrath and of hers.

Despite Pirro’s fierce loyalty to Trump, she has been passed over multiple times for administration jobs. After the election, Politico reports, she wanted the attorney general job. But when that went to Sessions, she pushed for the deputy attorney general post that Rosenstein ultimately landed. Next, Trump considered her for US attorney for the Eastern District of New York, but aides persuaded him not to make the appointment. Last November, Trump floated the idea of a federal judgeship, though his aides believed he raised it to flatter her and was not serious, according to Politico.

But a lot has changed since then. Trump has become increasingly isolated, and Pirro’s loyalty and friendship have remained a constant that have brought the two closer together. He regularly watches her show and speaks with her by phone. During the presidential campaign, she invoked her past as a prosecutor of domestic violence cases to defend Trump against accusations of sexual assault. On her show, she promotes his wildest conspiracy theories about the Russia investigation, lending her imprimatur as a prosecutor to conservatives’ attempt to discredit special counsel Robert Mueller’s investigation. And she recently interviewed Trump for her upcoming book, Lies, Leakers, and Liberals, which is rumored to be a rebuttal of the unflattering portrayal of the White House in Michael Wolff’s Fire and Fury, released in January.

If Trump does decide to appoint her attorney general, her outlandish claims on her show and her past legal troubles—allegations of misconduct by her office when she was district attorney, one lawsuit alleging defamation and another that accused her of fabricating facts for her book, and allegations that her husband had mob ties, to name a few—would lead to a very tough confirmation battle in the Senate. But after all she has done for Trump, there may come a point when there are not enough persuasive aides to stop him from giving her a promotion.

Read Mother Jones‘ May profile of Pirro and her influence on the president here.