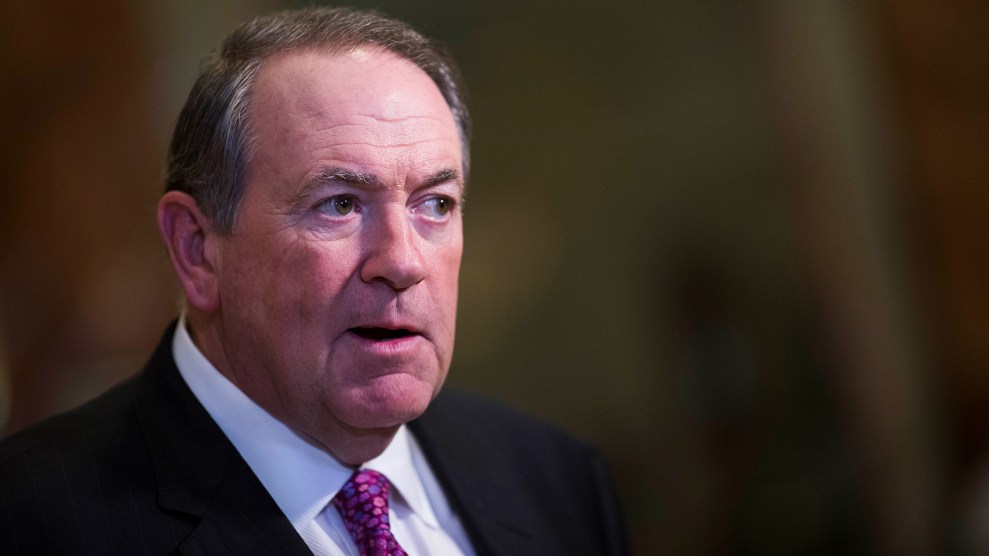 What, exactly, is wrong with Mike Huckabee? That’s what a lot of observers are asking after the former Arkansas governor and Christian minister tweeted out a photo this morning of what appears to be a group of Latino gang members, and joked that House Minority Leader Nancy Pelosi—one of the Republican Party’s favorite Democratic bogeywomen—had just introduced her campaign committee to take back the House.

There are two glaring problems here: First, the tweet is racist in its implications. Second, amid an ongoing border crisis in which President Donald Trump has made deeply dehumanizing statements about desperate asylum seekers—going so far as comparing them to insects—Huckabee’s tweet falls into a Republican pattern of low-brow scapegoating.

Democrats are the problem. They don’t care about crime and want illegal immigrants, no matter how bad they may be, to pour into and infest our Country, like MS-13. They can’t win on their terrible policies, so they view them as potential voters!

Trump and his minions regularly conflate Latino criminals and gang members—MS-13 in particular—with the vast majority of people who enter the country from down south, legally and illegally. In reality, these are overwhelmingly law-abiding people who come to work, and often to escape horribly violent conditions back home. And the data shows that immigrants are significantly less likely to commit crimes than Americans who are born here.

Blood libel all the way. Remember when Huckabee used to get favorable press as a folksy, likable guy? https://t.co/T9aLnEqjWM

Mike Huckabee's disgusting tweet is getting some attention this morning.

So I'm reposting this on how this sort of dehumanization works.

It's a Trump speciality, obviously, but Huckabee perfected it in a single tweet:https://t.co/nfSIFFeTYR pic.twitter.com/K5NhUAxylI

Just yesterday, in the midst of outcry about Trump’s family separation policy, the president held a press event at the White House with so-called angel families, people who had a relative killed by an undocumented immigrant.

Without a doubt, those families deserve sympathy. But the event’s timing, intended to deflect from the pain the administration is inflicting on other, often severely traumatized parents and children at the border, makes it a most callous political move.

Later this morning, after touting his upcoming appearance on the “Huckabee Show,” Trump took his own jab at Pelosi.

It’s very sad that Nancy Pelosi and her sidekick, Cryin’ Chuck Schumer, want to protect illegal immigrants far more than the citizens of our country. The United States cannot stand for this. We wants safety and security at our borders!