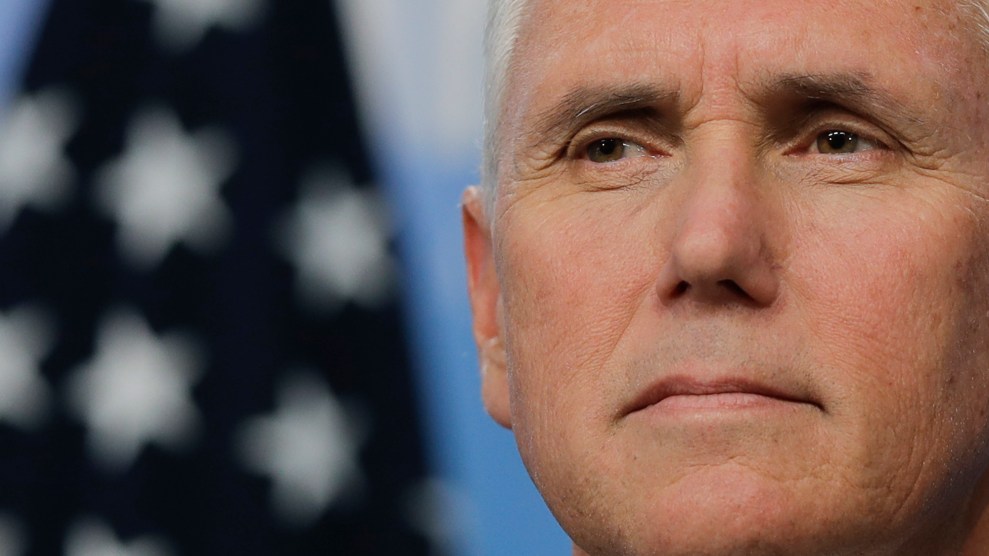 Outrage continues to rise around the country about the Trump administration’s forced separation of immigrant children from their parents. On Friday, Vice President Mike Pence was interrupted during a tax reform speech in Columbus, Ohio, by protesters who heckled him about the detention of migrant kids along the border: “Why are you ripping children from their families?” one shouted.

WATCH: A speech by VP Pence was interrupted by protesters against the Trump administration's policy of separating migrant children from their parents at the border. pic.twitter.com/RclwRLAfWl

According to figures released by the Department of Homeland Security on Friday, at least 1,995 minors have been pulled from their parents over the past six weeks and are being held in detention centers as part of the Trump administration’s new “zero-tolerance policy.”

“It’s cruel!” one demonstrator yelled at Pence as he tried to thank his supporters in the crowd. The action came a day after the American Academy of Pediatrics denounced the forcible separations, saying they could cause “irreparable harm to lifelong development” of the children involved.

Three top Trump officials have explicitly described why the administration has chosen to implement the policy of separating immigrant children from their parents.

Many of those children—many with parents who are being criminally charged for entering the country—are being held in a former Walmart in Brownsville, Texas. On Thursday, the Trump administration announced it would create a temporary tent shelter in the state for more children.

The protest in Columbus was one of many around the country on Friday. In San Francisco, hundreds of demonstrators took to the streets outside an office of Immigration and Customs Enforcement.

President Donald Trump has been blaming his own administration’s chosen policy on Democrats, the minority party in both chambers of Congress. “I hate the children being taken away,” he told reporters Friday at the White House. “The Democrats have to change their law. That’s their law.” He continued that false claim in a tweet on Saturday morning:

The Democrats are forcing the breakup of families at the Border with their horrible and cruel legislative agenda. Any Immigration Bill MUST HAVE full funding for the Wall, end Catch & Release, Visa Lottery and Chain, and go to Merit Based Immigration. Go for it! WIN!

There is no federal law requiring forced separations of immigrant families.

Unlike the Obama administration, as the New York Times reports, the Trump administration “is treating all people who have crossed the border without authorization as subject to criminal prosecution, even if they tell the officer apprehending them that they are seeking asylum based on fear of returning to their home country, and whether or not they have their children in tow.”

Three top Trump officials have explicitly described why the administration has chosen to implement the policy of separating immigrant children from their parents. Homeland Security Secretary Kirstjen Nielsen described it as “zero tolerance.” Chief of Staff John Kelly talked it up as a “tough deterrent.” And Attorney General Jeff Sessions defended it on religious grounds, backed up by press secretary Sarah Sanders, who told reporters “it is very biblical to enforce the law.”

And late Friday, the Washington Post reported that Trump himself sees the hardcore tactic as a negotiating tool toward the broader immigration policies he wants Congress to enact.

The highly controversial policy may nonetheless be ineffective. “We’ve seen no evidence that it is deterring families from entering,” Jennifer Nagda, policy director for the Young Center for Immigrant Children’s Rights at the University of Chicago, told NPR. “The families who are coming to the US are fleeing situations of extraordinary violence. When they are leaving, they are just trying to get to safety. From our experience, the last thing any of them anticipated was having their children taken from them.”