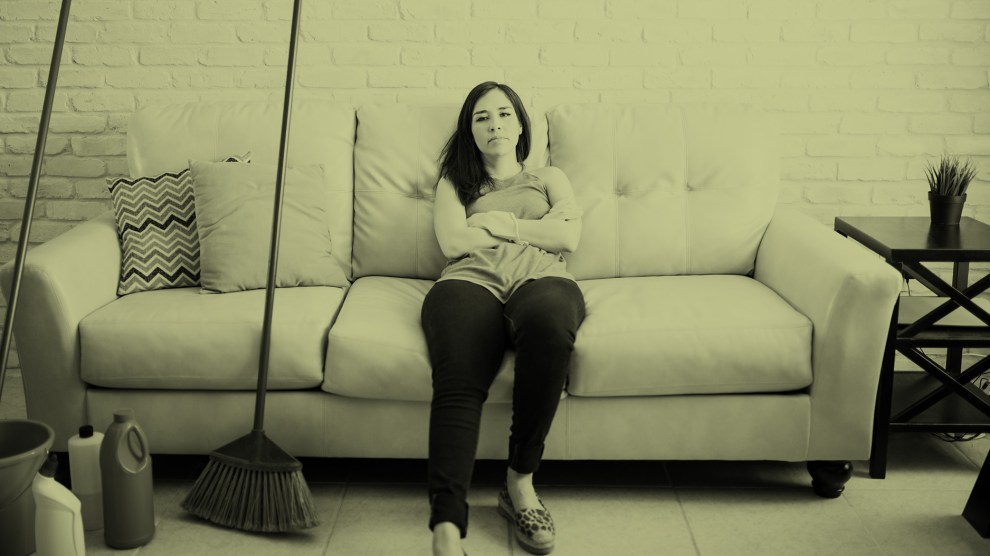 Life for Latina domestic workers in the Texas border region can be incredibly bleak. Many face severe economic hardships, often struggling to pay rent and cover basic needs, according to a new report released Tuesday—one of the first to provide a window into the lives of these women, many of whom face heightened instability under President Trump.

The report, published Tuesday by the National Domestic Workers Alliance, aims to “bring to life conditions of a sector that’s integral to the economy, but is overlooked and in the shadows,” says Linda Burnham, a senior advisor at the organization and one of the report authors. More than 200,000 domestic workers live in Texas, and it has roughly the third highest number of domestic workers in the country, after California and New York. The organization collaborated with three local groups focused on workers’ rights to survey 516 domestic workers along the Texas-Mexico border during the summer of 2016. Most of the surveyors were domestic workers themselves, who collected the data through interviews with house cleaners, nannies, elder care workers, and those who provide support for people with disabilities. The majority of the participants were women; 51 percent were undocumented or didn’t have work authorization.

37 percent reported going hungry—more than double the rate of food insecurity in Texas as a whole.

One of the report’s biggest findings is that a significant portion of domestic workers in the region face economic uncertainty; more than 40 percent of them struggled to pay their rent at some point in the last year, while 37 percent reported going hungry—more than double the rate of food insecurity in Texas as a whole. More than half of the workers said they were unable to pay for medical care for someone in their household. Abuse was not infrequent: About 27 percent of the workers said they had been yelled at on the job, while 12 percent said they had been pushed or physically hurt by their employer. A small number said they had been touched in a sexualized way.

Making matters worse, workplace protections were few and far between. Only a third of domestic workers have written contracts, making them far more likely to suffer wage theft and abuse, or to be forced to work longer hours than scheduled, according to the report. For instance, an overwhelming 97 percent of house cleaners did not have a contract.

“[Employers] don’t respect their rights, they overwork them, they pay them poorly, if they get paid at all,” Olivia Figueroa, executive director of A.Y.U.D.A. Inc, one of the community groups that helped conduct the survey, told Mother Jones through an interpreter. Figueroa herself was once a domestic worker in Los Angeles, where she was paid $40 a week to cook, clean, and care for a family with children. Because she lived in their home, she says she felt obligated to work at all hours, even at night. She stayed for three years before someone told her the conditions were abusive. “I felt like I had to do what they said,” she said. “They would tell me that they were putting a roof over my head, they were feeding me. I thought that if I said anything, I would be the one to suffer the consequences.”

Conditions were especially difficult for workers who were undocumented or did not have proper work authorization, especially when it came to wage theft and their hours. Thirty-five percent of workers with an insecure immigration status reported being paid less than initially agreed to, or not being paid at all. They were also three times more likely to be paid late, or be pressured to work longer than their scheduled hours. Thirty-two percent of undocumented workers said their employers had threatened to report them to immigration officials.

“[Employers] don’t respect their rights, they overwork them, they pay them poorly, if they get paid at all.”

Community organizers say that workers are generally more fearful with Trump in the White House, which they worry will further enable employers to take advantage of workers. “Right now it’s difficult to walk down the streets because of police, and many people are afraid to go to the store,” Elena, a domestic worker who wished to only be identified by her first name, told Mother Jones through an interpreter. Figueroa says she’s even heard from some domestic workers who have decided to stay at their employers’ homes rather than go to their own homes and risk getting deported. This increase in fear has been a setback for the group’s overall organizing efforts—workers who were once motivated to protest and demand rights “now have to look over their shoulder,” Figueroa says.

The report calls for changes on a number of levels, including giving domestic workers access to federal health and safety protections, the right to paid leave, and improved access to health care. (Domestic workers are largely excluded from many federal labor and employment protections, such as the ability to form or join unions or ask for sick leave.) Some of the workers are hopeful that the data in the report will call attention to just how precarious their situation is.  “I know so many workers who are still working for $20 a day and getting taken advantage of,” says Elena. “We want to make sure that not one more is working under these conditions.”

“Everybody in South Texas knows that there are ways in which the function of the economy depends on these women. People leave their houses, their children, and their parents in the care of people who are egregiously underpaid or abused,” says Burnham, of the National Domestic Workers Alliance. “These women have their own families to take care of, they’re committed to the work, they work hard every day—and they deserve better.”