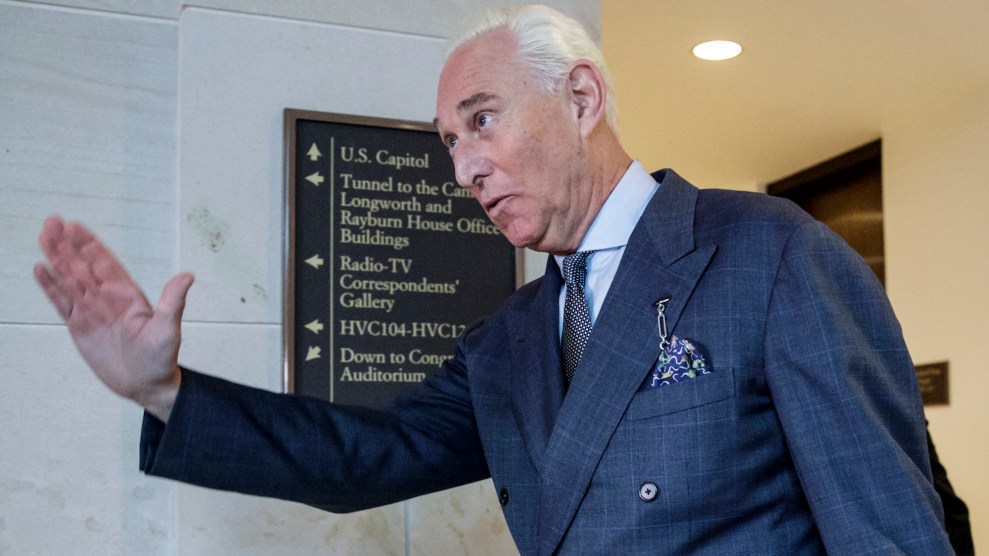 Roger Stone arrives to testify behind closed-doors as part of the House Intelligence Committee’s investigation into Russian meddling in the 2016 election, on Capitol Hill Sept. 26, 2017.AP Photo/J. Scott Applewhite

The Washington Post had a big scoop on Sunday: During the 2016 presidential campaign, Donald Trump’s longtime adviser Roger Stone had an undisclosed meeting with a Russian man offering to sell dirt on the then-presumptive Democratic presidential nominee Hillary Clinton. The meeting, which the Post says was not disclosed to congressional investigators, has reportedly come up as part of Special Counsel Robert Muller’s investigation into Russian meddling in the 2016 election. It was arranged by Michael Caputo, a Trump campaign communications official.

One day in late May 2016, Roger Stone — the political dark sorcerer and longtime confidant of Donald Trump — slipped into his Jaguar and headed out to meet a man with a Make America Great Again hat and a viscous Russian accent.

The man, who called himself Henry Greenberg, offered damaging information about Hillary Clinton, Trump’s presumptive Democratic opponent in the upcoming presidential election, according to Stone who spoke about the previously unreported incident in interviews with The Washington Post. Greenberg, who did not reveal the information he claimed to possess, wanted Trump to pay $2 million for the political dirt, Stone said.

“You don’t understand Donald Trump,” Stone recalled saying before rejecting the offer at a restaurant in the Russian-expat magnet of Sunny Isles, Fla. “He doesn’t pay for anything.”

Greenberg is a colorful figure, who has associated with Hollywood producers here and in Russia, and also appears to have spent 17 years working as an FBI informant, according to the Post, which says there is nothing to show that he was working for the FBI when he met with Stone.

Despite any evidence, Stone and Caputo have taken the supposed FBI connection and run with it:

“If you believe that [Greenberg] took time off from his long career as an FBI informant to reach out to us in his spare time, I have a bridge in Brooklyn that I want to sell you,” Caputo said in an interview.

In a separate interview, Stone said: “I didn’t realize it was an FBI sting operation at the time, but it sure looks like one now.”

Last year Stone denied having any contact with Russia during the campaign, a story that has been shifting ever since. He told the Post he forgot about the meeting with Greenberg, which he now claims was an FBI set up.

Stone’s meeting with Greenberg brings the total to 11 different Trump campaign officials or associates who have admitted to having contact with a Russian during the campaign and the months before Trump took office, according to the Post. Trump, however, seems to view the story, and Greenberg’s alleged FBI ties, as more evidence that the Russia investigation is a politically motivated attack on him. This morning he tweeted:

The Post report was a popular topic on the Sunday morning show circuit, with hosts pressing Trump lawyer Rudy Giuliani about the meeting. He alternatively said Stone had never talked to the president about it, and that he didn’t know if Stone had.